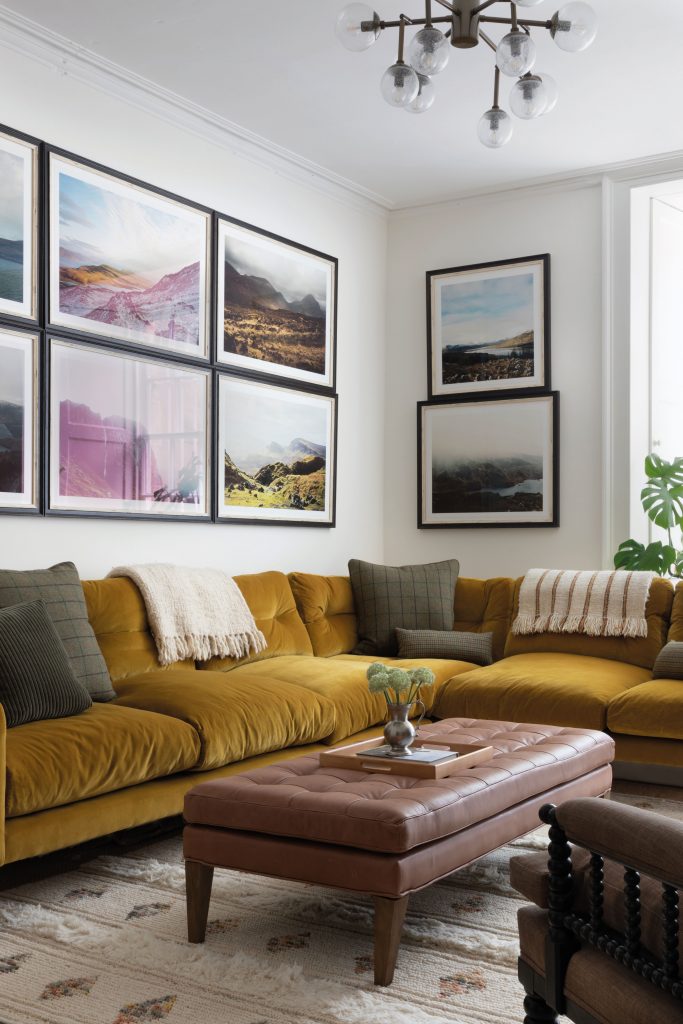 Some wee girls ask for Lego and Mr Frosty for Christmas. But when Lisa Guest was little, her letter to Santa looked quite different. “I would ask for furniture and rugs,” laughs the interior designer, who grew up in Las Vegas. “My dad was a builder who built every house I grew up in. We’d make furniture together in the garage, or I’d sit in his office and design my own house plans for fun. I loved arranging things within a space.”

Unsurprisingly, Guest’s childhood passion blossomed into a vocation. She moved to northern California and interned for Erin Martin Design in St Helena – “She’s incredible, and I learned so much,” says Guest – and it wasn’t long before she had her own business with a roster of clients. But then something, or rather someone, unexpectedly altered her life trajectory. She fell in love with a Scottish guy (hey, it happens to the best of us). “I came here in 2016 to meet up with a friend and ended up at a Hogmanay party at Olly’s new flat,” she recalls.

“Seven months later, he and I were married and I was moving to Edinburgh.”

Together, the couple renovated Olly’s home on London Street. It was Guest’s first time working on a Georgian property and she quickly became enamoured with a style of architecture completely different to the sprawling ranches and mid-century modern homes that dominate the west coast of America.

“I loved the high ceilings, the mouldings, the set-up. I was completely out of my depth, but I learned a lot,” she says. “We then ended up renovating another flat on North Castle Street and I started to really enjoy working on Georgian properties. Maintaining and honouring their history is so important.”

When Guest fell pregnant with daughter Ivy in 2018, she and Olly began looking for a Georgian home in a family-friendly neighbourhood befitting of their next chapter. They found it the following year in Stockbridge: a four-storey townhouse with a garden, owned by an artist and architect who had lived there for more than five decades.

“What I really loved was that it hadn’t been chopped up; the original floor plan was intact, and they’d done such a good job of preserving everything,” says Guest. “Having a full townhouse like that feels like owning such a huge piece of history.” She was eager, like her predecessors, to conserve the character of the home. She kept the layout as it was, with a formal sitting room, dining room and butler’s pantry on the ground floor; a family room, bathroom and office on the first floor; two bedrooms and a dressing room on the top floor; and a kitchen, two guest rooms, and a playroom at basement level.

Some pretty major work was required, however, to address the creaks and leaks that tend to set in after a few hundred years. The roof was replaced by James Breck using the original reclaimed Scottish slate and leadwork, and a new glass cupola was fitted, all while the family were living there (“I think I had two meltdowns in the middle of it all and ran to my mother-inlaw’s for cover,” laughs Guest). Dalkeith’s Charles Taylor carefully restored all of the woodwork throughout, a process that took several months.

“I think the woodwork is my favourite thing about our house, to be honest – that and the original porcelain tiles around some of the fireplaces, which are just stunning,” says Guest.

The interior designer didn’t want to lean so heavily into the Georgian aesthetic as to make her home feel overly formal. Plus, its ornate architraves and elaborate mouldings are so striking that more modern pieces could sit quite comfortably in the house without the heritage being lost. The furnishings are a combination of pieces shipped from California, vintage finds sourced through Georgian Antiques in Edinburgh, and made-to-measure designs. Different types of wood – walnut, oak, teak – intermingle in many of the rooms. The result is a layered, skilfully curated home where old meets new. 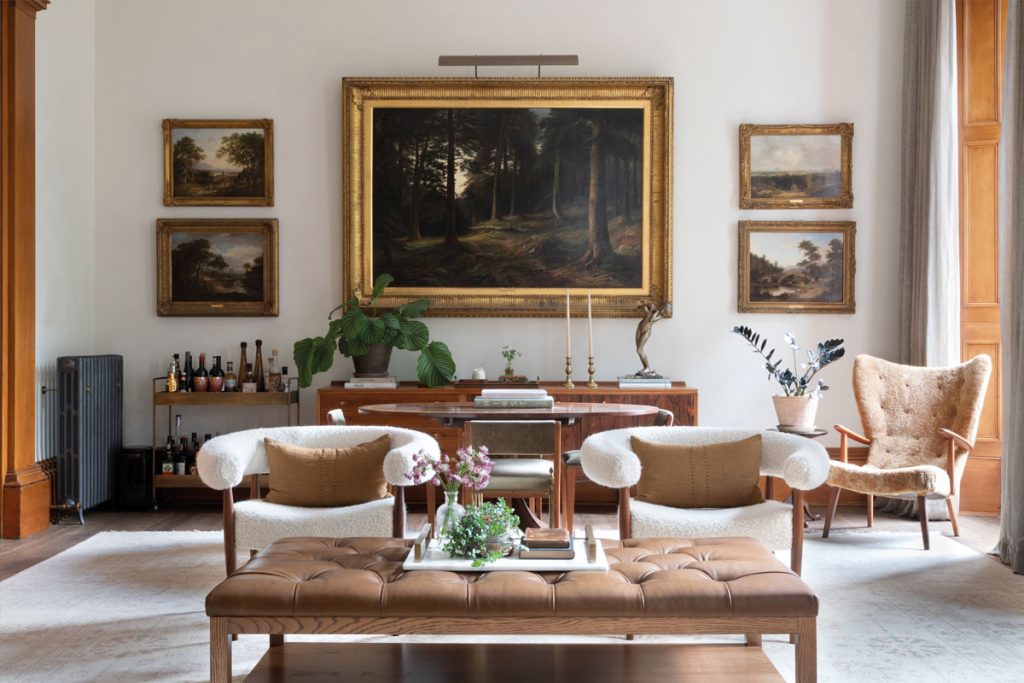 “It wouldn’t feel current to have all-Georgian furniture in a Georgian home, because it’s just not practical – it’s not how we live today,” she explains. “I love mixing together mid-century and antique pieces, combining different periods to create a warm, lived-in feel.”

Edinburgh’s Peden & Pringle undertook the lion’s share of the custom work, fitting out the kitchen and butler’s pantry with bespoke cabinetry and making two bookcases, a TV cabinet and storage for the bathroom and dressing room. “We wanted to give a nod to the history of the house while keeping everything functional, which is what I think Lisa has achieved really well,” says Adam Peden, director of the Colinton-based firm. “The home is well set up for modern-day living.”

An appealing sense of space and airiness travels through the house, calling to mind Guest’s Californian roots. The kitchen, the couple’s favourite place to entertain, is bright and fresh with white tongue-and-groove cabinets and cool grey flagstone flooring. The family room is painted in Farrow & Ball’s School House White, and the light-filled Boscolo bathroom on the same floor is white with brass accents and flashes of greenery. Warmth is maintained with the incorporation of green, ochre and soft grey-blue in most rooms, colours that are mirrored in the atmospheric Nasmyth landscapes hanging in the family room, which were selected by Olly.

“My husband is the worst client I’ve ever had,” jokes Guest, who has had a difficult time trying to convince her partner of the merits of wallpaper (though she did succeed with the fabulously forest-like William Morris ‘The Brook’ linen wallcovering in the dining room). “Olly has an opinion on everything, although to be fair, they’re usually good opinions. And I’m grateful to have a partner who cares so much about the same things I care about!”

Even three-year-old Ivy had some input into the decor. “Yellow is her favourite – it’s the first colour she learned how to say – so that’s the main colour in her bedroom. It’s funny because I found out after we’d painted it that my mom painted my nursery yellow, too,” smiles Guest.

Of an evening, the couple like to hang out in the family room. It’s the space that sold them on the house in the first place, thanks to its three windows overlooking the park. “We have a little balcony where we like to sit in the evening having a cocktail and watching the sunset,” says Guest. “You know, it was a huge lifestyle change to move here, and it was tough getting used to the dark winters. But now I absolutely love it. It’s such a beautiful part of the world.”