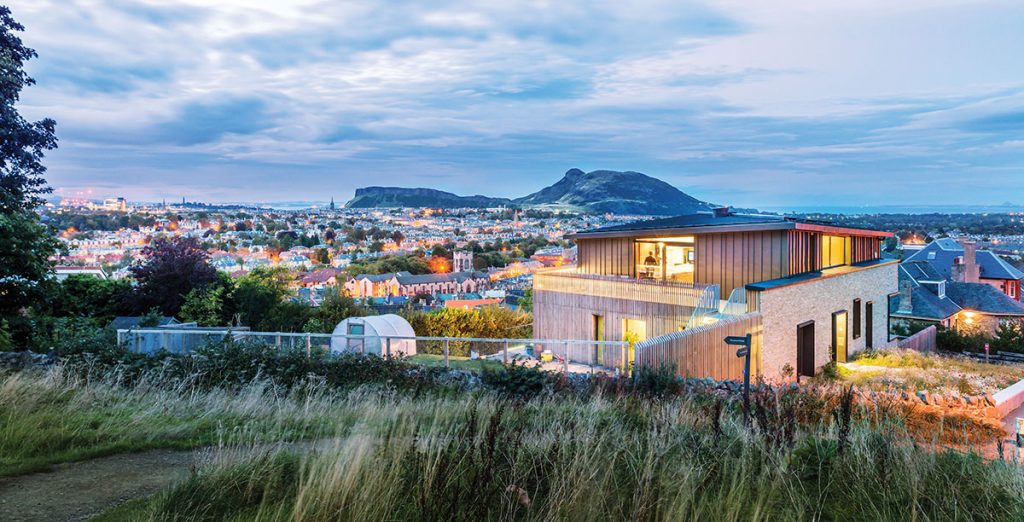 Julia Bouvy and her husband Will were out on a walk across the green expanse of Edinburgh’s Blackford Hill when they were momentarily distracted from the breathtaking views across the city. Here, deep in the suburban heartlands on the edge of the hill, they’d spotted a 1930s bungalow that looked ripe for converting into the family home they’d always dreamed of owning.

On closer inspection, however, they discovered the house had been poorly updated in the 1970s, and by the time it was theirs and they’d been in it for a while, they realised that what they’d hoped were merely quirks and foibles were actually pretty major issues that urgently needed addressing. “With no foundations and an unsound roof, the structure was not great,” recalls Julia, an architecture graduate with roots in Belgium and Scotland. “One structural engineer asked if we’d considered demolishing it and starting over.”

For Julia, this felt like an odd way to begin creating an environmentally friendly home; but, having lived in the bungalow and experienced at first-hand how badly constructed it was, she realised that starting over would give her and Will control over the kind of home they wanted to design. Building from scratch didn’t faze them either: “We’d actually been looking for a plot of land to build on for a long time, before we bought the bungalow.”

The couple had a very specific brief and interviewed four architecture practices before deciding that David Jamieson, director at Edinburgh’s Zone Architects, was the right fit for this job. “He was excited about our proposition,” recalls Julia, “and he was happy for me to collaborate with him on the design.”

Top of their list was that the new-build should be sustainable and completed to minimise its ecological footprint through energy efficiency. Making the most of the views across the city to Arthur’s Seat and the Royal Observatory seemed like a no-brainer – the bungalow, bizarrely, had had only four small windows facing the view.

This determination to get the most from their vantage point led to an upside-down layout, where the living areas are positioned at the top of the house and the bedrooms are on the lower floor, with a self-contained granny flat in the basement. The topography needed careful consideration too: the quarter-acre site is on a slope that drops eight metres from one corner of the garden to the other.

Julia was adamant that she wanted only natural products to be used in the build, but a lack of suitable alternatives meant the structure’s membranes and roof do have plastic elements. The majority of the construction materials come from renewable resources, though, such as the timber insulation from Natural Building Technologies and, more importantly, the cross-laminated timber (CLT) frame.

These large slabs of laminated timber were supplied by Spanish firm Egoin and installed in a staggeringly short timeframe of just eight days. And it was precision work: “Will is an electronics engineer and likes things to be designed tightly. With CLT, you can get to 5mm accuracy!”

Internally, the spruce timber walls fit with the design ethos that the couple wanted to achieve. “What you see is what you get,” Julia remarks. They might be untreated and unadorned, but these walls give off an unparalleled warmth whether in an open or more contained space. “We wanted the living areas to be as open as possible, but for the bedrooms to be closed and quiet. Our eldest son is very sensitive to noise, and so having the bedrooms secluded was an important element.”

The staircase is a work of art: cantilevered steps emerge from the wall that acts as a spine, with a cylindrical inset handrail that is back-lit, creating a genuine sense of drama as evening falls.

There’s a minimalist palette outside too. The random rubble stone wall and street elevation, sourced at Stone Restor, connects it with the neighbouring bungalows. These were originally developed for the Observatory workers, and it’s believed they were built using stone from a demolished prison that once sat on Calton Hill. Likewise, the entrance wildflower meadow is a respectful nod to the surrounding Blackford Hill nature reserve. Zinc cladding and roofing, supplied and installed by D. Blake & Co, references the Observatory’s telescope towers, visible from the house, while the untreated Siberian larch, from Russwood, that wraps continuously around the house chimes with Julia’s desire for natural, sustainable design.

“It’s like origami,” she says. “There’s no glue, no joins. The builders, from John Dennis & Co, started at one end and worked all the way round. Incredible shadows are created when the light catches it, and it’s always changing, depending on the time of day.”

The house respects its special location at the top of Observatory Road, blending into the 1930s suburban area, while to the rear, extensive glazing and numerous terraces flip the focus to the natural beauty outside.

Having the confidence to remain true to their wish list and trusting in the expertise of the specialists involved in this build has produced a home that is completely unique. “Julia and Will should be congratulated for their commitment,” agrees David Jamieson. “It’s always exciting to see a family move into a brand-new home, especially one that has been designed to their own specification. More people in Scotland should be able to build their own home, so they can avoid the mediocre design quality of the volume housebuilders.”