This article is a partner piece for episode 10 of the Homes & Interiors Scotland podcast. Check out the other episodes here

Neil McKinlay – A cabinetmaker who branched out into making skateboards

“When I’m designing and making a piece of furniture, I just do what I like and hopefully other people will like it too. Anything with wood, metal and bright colours is always the way I seem to go. I found the best way to learn was to do it, make mistakes and keep on moving. So the university of life has been my schooling for the most part.

My bread-and-butter work is one-off commissions. I’ve just completed a freestanding unit with aged copper doors – it turned out really well. I’m always busy with wainscoting work too. As a nice sideline, I make longboards and skateboards. It’s growing but it’s still a sideline for now. It started when a friend gave me some old whisky barrels and I wanted to use them to do a small building project with my boys.

Somehow we came up with a skateboard. It was unusual because of the curved shape of the barrel. Making them has changed the business quite a bit – I’ve never had an actual product to sell before. My work had always been a service, or to build cabinets from a designer’s or architect’s plans. I sold some boards to famous people over in LA and when they posted pictures on their social media I got a lot more orders.”

“I grew up in Glasgow in a large, fairly chaotic family of writers and film-makers where there was always something creative going on. My father is a mathematician and his hobby was making polyhedron models. I was fascinated by these beautiful creations and by how a complex shape could come from a piece of paper or card. Those memories inspired me to try paper-folding years later, which is how I arrived at where I am now.

I have always been interested in 3D design. I began to explore the art of paper-folding in my spare time while working as a BBC radio producer in London, intrigued by the possibilities of what could be created through manipulating a flat piece of paper. When I moved back to Scotland, I needed some lighting for my new house so I began experimenting with my new skills to make folded paper shades that would be functional as well as beautiful.

My first real break came in 2013 when I spotted an open call from a group of local designers called Analogue Social. They were collaborating with the Lighthouse in Glasgow on an exhibition entitled Paper and were looking for interesting interpretations of the everyday material. I applied and was delighted to be chosen as one of the eight designers asked to exhibit work in the show.

I like improving the lighting in people’s homes. The quality, strength and tone of the light can completely alter a room’s atmosphere, and a well-considered shade will bring warmth to a space. I enjoy being at least partly responsible for making people’s living spaces better.”

Annette Smith – A chocolatier whose creations are miniature, edible works of art

“For as long as I can remember, I have been interested in food – I’ve had a long-standing obsession with artisan chocolate in particular. When I first moved to Scotland, I struggled to find new chocolates and flavours to satisfy my passion, so I decided to try creating my own. I’ve discovered that I really like working with shapes. The curve helps to enhance the shine of nicely tempered chocolate, which I like a lot.

When I use colour, I always try to make reference to the flavour. Sometimes, if I’m using another maker’s product, I’ll try to connect it to the colour of their branding. My Orange, Chilli and Makar Original Gin chocolate, for example, has the blue of the Makar Gin label as well as orange and red flickers to represent the fruit and the spice.

I love going to Paris, and particularly to the annual Salon du Chocolat – a huge chocolate expo. I always come back feeling motivated. Food and flavours in general are a big influence. I’m constantly wondering what would work with chocolate. My Halen Môn salted caramels are probably the most popular thing I make. They’re an eye-catching blue, and customers always tell me that as soon as they’ve had one they want another. Using Halen Môn sea salt, which is from Anglesey, is a nice nod to my Welsh roots too.”

“I opened my first beauty salon when I was very young. When I eventually sold it 20 years later, I started a new business, Timeless Scotland, making and selling luxurious but affordable candles and  scents.

The idea had been sparked by my clients; after an aromatherapy treatment, many of them would say, “I wish I could bottle this feeling.” So I’d started making scents they could take home to help recreate that sensation of being relaxed. Now, working out of our shop in Glasgow’s west end, using sustainable wax, fine ingredients and proper scent distribution to make very high-quality products, the business is growing steadily.

I’m inspired by my favourite top-end brands. I like to try to work out how to achieve some thing that’s just as luxurious but which doesn’t cost the earth. The sense of smell is powerfully tied to memory. It can also have a real impact on how you feel, and be closely linked to a specific place; when we were asked to make a bespoke scent for Loch Lomond Golf Club, I spent time in the club’s walled garden, selecting plants and herbs to create an incredibly evocative perfume.”

Malcolm Appleby – An engraver and silversmith with an experimental style

“I went to five art schools, which you could do in those days. A gift of the gab and a portfolio of work got me in. I didn’t get any qualifications, but I sold my first work in 1963 when I was still at the Central School of Arts & Crafts. If I’ve learned anything over the years, it’s that I haven’t learned enough.

I’m always experimenting and trying out new techniques. I was like this at art school. That’s where I discovered fusing gold onto steel – a very painterly technique. It’s time-consuming and expensive, but for me it was a revelation. It turned me from an engraver into a painter. Engraving is a drawing technique and it’s a process you do by hand. I don’t use power tools or lasers. If pressure’s needed, I use a tiny hammer. I can work in exceptionally fine detail on steel, which has more resistance than other materials so you can cut finer.

Most jewellers have soft carpets and lighting that brightens up the gold. That’s not our approach. Ours is about contact with the work, a sense of touch. My work is sold from my workshop and the building’s design philosophy is about encouraging people from all walks of life to visit and feel welcome.”

Astrid Andreassen – Originally a student industrial design, who turned her hand to slippers and shoes

“It was never my intention to be a shoe designer. I studied industrial design and went to work for Philips and Nokia. A design competition led me to work for Puma and from that point on my world turned to shoes.

I really enjoy the process of making. I love preparing a sample for a new design, improving it, even tearing it apart in order to put it back together in a better way.

My aim is to improve the little things in everyday life. There are so many shoes out there that it’s a challenge to get A. Andreassen, my own brand, noticed. I don’t want to make mere novelties, or to position it as a luxury brand – I simply want to improve the quality of everyday objects and make them obtainable for those who appreciate good value and good design. That’s true luxury.” 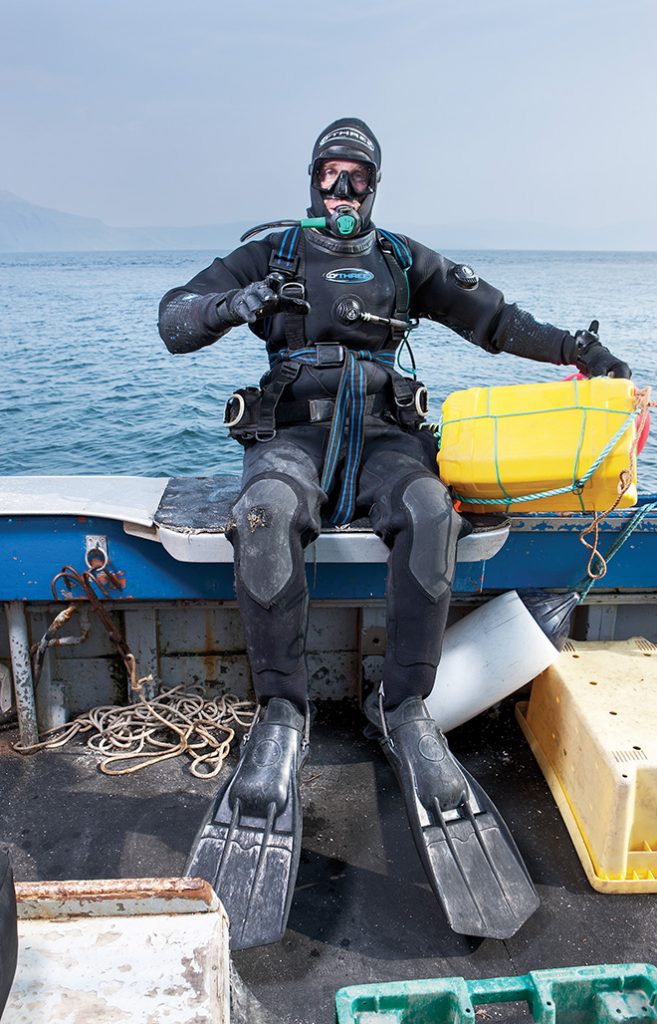 “There are no thrill-seekers in this game. It can be very exciting but you don’t go out looking for it. Wind and weather are the boss. They tell us where to fish and for how long. But they and the tide help too – scallops feed on currents so if we follow the currents we often find the scallops.

The original motivation for calling ourselves the Ethical Shellfish Company came from getting a licence that allowed us to go into this great garden and take as much as we wanted all year round. That’s really powerful – so powerful, in fact, that without ethics it can be tyranny. We knew we had to fish in a way that justifies the great privilege we’ve been given.

The waters of north-west Scotland are pretty hard work. None of the ex-Special Forces guys have done very well with us – it’s not right for macho types. The people who do the best are the ones who just love the sea. It lets them pick up the currents and they understand the seabed intuitively. I miss the silliness and the banter you get working in an office. There is laughter on board but underlying it all is the knowledge that this is a serious business.”