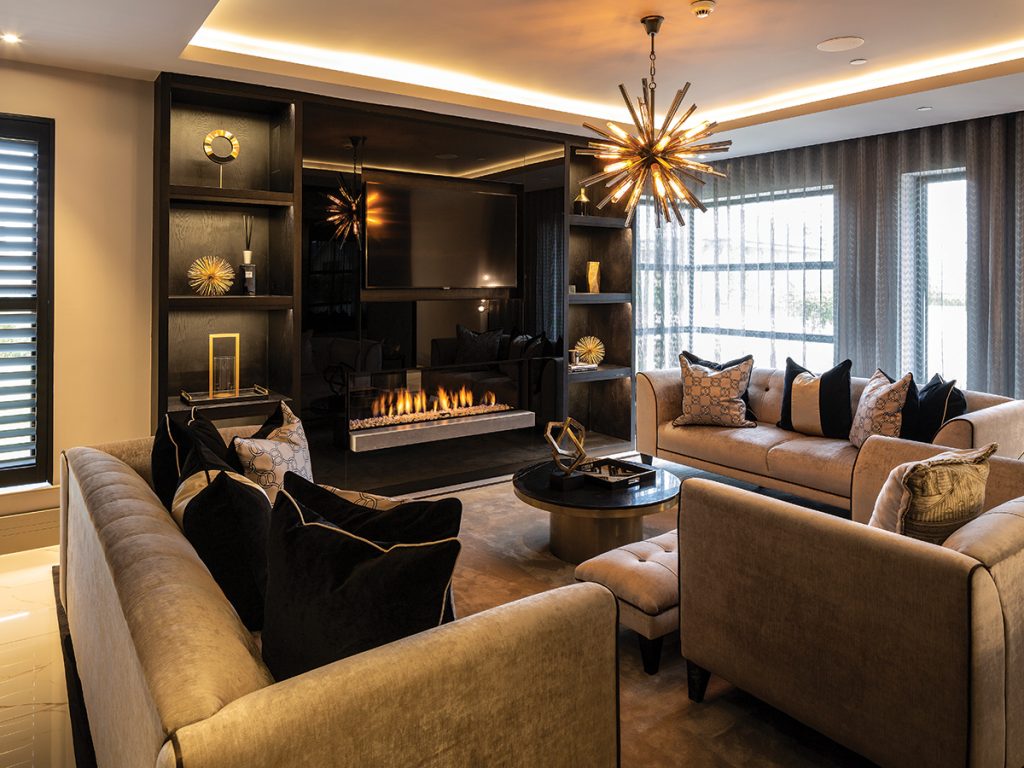 Modern luxury – the kind of ultra-glamorous pad we might daydream about owning as we check the EuroMillions results – probably encompasses acres of polished marble, oodles of fancy fixtures, an indoor swimming pool, super-high-tech sound and vision throughout, and a triple garage. Add in seven bedrooms, nine bathrooms and a custom-built firepit in the garden, and you’d have something resembling this staggering three-storey property on the outskirts of Glasgow.

Unlike many high-spec, big-budget projects, however, the glitz and the glamour only tells part of the story. There’s a lot more to this one than meets the (admittedly rather dazzled) eye. This epic new-build, in fact, is all about commitment. Those putting it together endured the inevitable tsunami of stress, overcoming massive co-ordination and logistical challenges along the way.

It’s not only a success story borne out of three and half years of hard graft and planning, but a deep education into how a state-of-the-art home comes together – to suit the owners’ family now and in the future.

Local interior designer Julia Grant came highly recommended, with significant experience in producing high-end homes under her belt. The clients, hands-on throughout the project, knew exactly what they did and didn’t like, and were full of ideas of what they wanted, from major elements of the structure right down to accessories and fabrics.

From Grant’s point of view, having the interior design wheels put in motion at the outset, at the same time as architect Thomson Hunter got involved, is one of the reasons this house has turned out so well: “The owners brought me in from the start – that was so refreshing, as quite often the interior design is an afterthought and it’s too late to incorporate the extra elements that someone like me can bring to such a project.

“We were able to suggest where the fireplaces should be situated and how manufactured joinery pieces, such as drinks’ cabinets and bookcases, could be integrated into the various rooms,” she adds. “And we were able to work with audio-visual consultant Face Off Services on the lighting strategy, embedding concealed LEDs controlled by a Crestron system where necessary.”

A lot of these were behind-the-scenes interventions – invisible work that makes a big difference to the easy functioning of the house. But there is plenty of visible evidence of Grant’s hand in the design – starting from the moment you open the front door and step into the astounding entrance foyer. The clients’ desire was for a dramatic atrium with a triple-height entrance and a double staircase.

Its pale grey carpet offers some sound-proofing and balances out the harder elements of the hall, such as the tiled floor. Laid on top of underfloor heating, large-format polished ceramic Palace tiles from Solus are divided by a long black chevron band of tiles that connects the front of the house to the rear.

When your ceiling is fully 10m high, no ordinary light fitting is going to cut the mustard. Thus, to ramp up the drama even further, a sensational 5m-long crystal chandelier from Lightstyle was suspended between the two staircases. Made of hundreds of intricate strips, it took an electrician on a cherrypicker four days to assemble and install.

The atrium fire, from Bellfires, has a dark surround formed from black marble slabs selected from the yard at Larkhall’s Blyth Marble and fabricated by Gibson & Goold. Timber panels, built by SJS Property Services, are finished in a subtle padded Silkor vinyl from Warwick Fabrics. Used on the opposite wall to a recessed seating alcove, it’s a device that adds symmetry and leads the eye upwards in appreciation.

Interestingly, rather than being a daunting prospect, dealing with the lofty ceiling height allowed the designer to innovate. “The proportions and scale of this triple-height space and the other double-height parts of the house gave me the opportunity to create interesting features,” she says.

One of the most distinctive features, however, is not over-head but rather lower down: the sunken seating area in the kitchen-living room. “We did it because we could!” Grant recalls with a smile. “I’d always wanted to design one and, thanks to the amount of space we had here, it was feasible in this room.”

Long sofas have been built in around the horseshoe-shaped black-bordered pit. Gold and bronze fabrics from Kobe Teatro, Prestigious Textiles, Wemyss and Clarke & Clarke were chosen for the upholstery, but it’s texture rather than bold colour that dominates.

It’s a unique place in which to relax, chat and sip after-dinner drinks, and feels warm and intimate – no mean feat, considering the room is washed by the light from vast full-height windows (voile curtains in an iridescent semi-transparent neutral tone hang from a made-to-measure, electric Silent Gliss track).

Exaggerating the wow factor even further are seven copper spherical ceiling lights by Tom Dixon clustered overhead, like something from a sci-fi movie. As you sit here, vertical and horizontal openings carved into the wall give glimpses through to the vestibule that leads to the smaller and more intimate lounge and dining rooms beyond. Facing you, meanwhile, is a fireplace wall with a built-in TV. Clad in large Rex tiles from Domus, this huge feature (it’s 2.4m by 1.2m) needed eight people to manoeuvre it into position.

On the other side of the bespoke River fireplace by CVO which is built into the floating marble hearth, is the kitchen. Malcolm Daly from Kitchens by J.S. Geddes installed the curved island with its faceted sides, and the seamless connecting circular upholstered booth. “The attention to detail is astonishing,” acknowledges Grant. “If certain aspects weren’t right, he’d tell you, then solve them.”

The kitchen is as opulent as you would expect: the smart Poggenpohl furniture, Gaggenau appliances, Quooker tap and Corian and Dekton work surfaces ooze luxury. It’s there in every detail, from the bespoke pewter hammered door handle to the circular ceiling recess (mirroring the shape of the booth) and a statement Cerchio pendant from Illuminati.

All that early work behind the scenes has paid off in the lighting. Controlled by an iPad to suit various times of the day, the Crestron system can set the scene and light up or dim different zones. A clever combination of concealed LED strip lighting is embedded in ceiling and skirting recesses, slots in walls, spaces behind mirrors and manufactured joinery, all complemented by feature pendants, downlights, table and floor lamps.

There’s a comms room on each of the three floors, dedicated to digital communication and network devices, while seven miles of data and fibre cable (this is proper future proofing) have been carefully stashed in concealed cupboards.

A staircase leads from the kitchen-sitting room to the first floor, passing a bespoke bookcase that echoes the display cabinets below with their wenge stained wood and copper mirror surround.

The master bedroom has a double-height ceiling, which meant a mezzanine housing a large circular bath could be added. The back of the headboard has been tiled, turning it into a partition as you enter the room; to the right of it is the bathroom with a double vanity unit from Scope Bathrooms; to the left is a dressing room built by SJS. Five metres of silk-lined Casamance drapes frame the view of the garden’s silver birches. Grant took her design cues from this and the sheer volume of natural light that floods the space.

“I was lucky to have the opportunity to design a house like this and give it bespoke built-in elements,” she concludes. “The mixture of large open spaces flowing into smaller cosier rooms makes it feel more like a home.”