The champion chocolatier and founder of the award-winning Cocoa Black on thriving in Peebles, experimenting with flavours and living life to the max 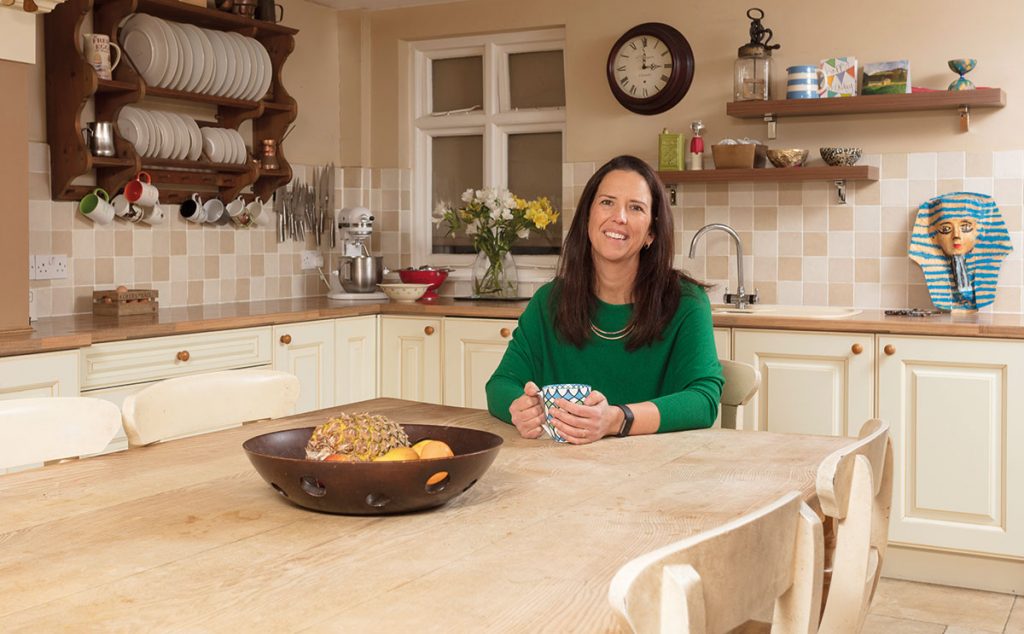 Taking it easy is not something that Ruth Hinks does very often. Even after a glass or two of wine at the weekend with her husband David, when most of us would be putting our feet up and perhaps settling down with a movie, she is busy signing up for the Edinburgh half-marathon.

She’s laughing as she tells this story, all too aware that it is entirely typical of her personality. Setting goals, rolling up her sleeves for a bit of hard graft, and pushing herself out of her comfort zone is what she does best – and it’s what has led to her successes, of which there are many.

“I remember as a kid wanting to buy a tape deck,” recounts Hinks, who grew up in South Africa. “My father had suggested growing vegetables to sell but I thought that would take too long. I’d always spent a lot of my time in the kitchen with my granny, who was a great baker, so I decided to make Easter eggs instead.”

She is the first to admit that her parents – her father, in particular – had much to do with her work ethic. They were the ones who instilled in her an unshakable belief that hard work is the only way to get what you want. “Things don’t fall into your lap,” she says. “They were really keen for me to learn the value of money.”

It was a lesson she took to heart from a very young age. To buy that tape deck, or whichever toy had caught her eye, she would have to earn the money herself, so she got busy in the kitchen, making and selling chocolate eggs. Her father was a dentist and her German mother managed the practice.

Taking her wares into the surgery waiting room, the enterprising child would sell her treats to the patients, earning pocket money for herself but also generating sales for the dental practice. “The patients would realise they were yet to go in to see my dad, so they’d ask to quickly buy a toothbrush and toothpaste before they got called in!” This approach of life, she adds, means she’s never had to ask her parents for anything.

The family left South Africa for Australia and it was there in Melbourne, at the age of just 25, that Hinks became head pastry chef at the five-star Windsor Hotel. Working the hotel circuit, where 16-hour shifts are par for the course, is a gruelling career; despite this, and to keep at the top of her game, she made it a priority to compete in the most prestigious industry events and expos in the world, including the Culinary Olympics.

“I met David in Sydney – he was working for KPMG as a management consultant at the time – and when we got married we moved to Peebles, where he’d grown up.” After four years of working overseas, David was keen to return to the UK to support his parents who had been caring for his disabled sister, Annalise.

“I’d been working as head pastry chef at the Sheraton in Edinburgh and David was working for Scottish Widows at the time of the financial crisis,” she recalls, “My son, Aiden, was around 18 months old, and my daughter Delphine was four months; that’s when David found out he was being made redundant.”

The couple began thinking about setting up their own business in Peebles. Hinks called her dad and talked through their plan with him. His reaction was unequivocal: “Don’t think about it – just do it.”

From that point, a serendipitous series of events led in 2007 to the forming of Cocoa Black, initially as a chocolate and cake maker and then as a shop and a dedicated chocolate and pastry school. Hinks found a site for her kitchen warehouse unit through her hairdresser, while the shop – which opened in 2010 – had previously been office space in the heart of the village.

The couple completely refitted it last year, giving it a clean, modern boutique look that better reflects the quality of the products for sale. Spiced chocolate-orange slices, pastel-hued macarons and caramel ganache towers are stacked like delectable Lego blocks behind the glass counters, where adults stare as wide-eyed as their kids.

“I’m lucky enough that I’ve been able to travel all over the world with my work,” says Hinks. “I remember going to a beautiful pastry shop in a small town in the south of France, where I was living for a couple of months. It was then that I thought I’d love to have my own shop. ‘It’s better to be a big fish in a little pond,’ my father would often say, and that advice has always stayed with me. I have no interest in opening up a chain of shops. My plan for 2019 is to get back into the kitchen and experiment. My dad just wanted to fix teeth; I just want to make chocolate.”

Hinks is one of the top five chocolatiers in the world. She took part in the World Chocolate Masters, a three-day competition in Paris before a judging panel of some of the world’s finest chefs. “I trained for 25 hours a week for a year under pastry chef Martin Chiffers. It’s really tough work, but no one knew me so I really wanted to raise my profile while Cocoa Black was still in its infancy.”

With the Chocolate Factory, the Chocolate and Pastry School and Cocoa Boutique, she is busy teaching not only her kitchen staff but also the budding cooks and makers who attend her classes. She brings international pastry chefs and chocolatiers to Peebles to teach, too; masterclasses at the school led by celebrated Dutch patissier Frank Haasnoot and Spanish chocolate master Hans Ovando sold out in under two hours.

“We’ve got 25 staff to think about here,” she says, “and I’ve got to keep them excited and interested in what they’re doing. I don’t want to lose them, so bringing world-class chefs here keeps it relevant and interesting for all of us.”

Her achievements to date are so vast and varied that it’s difficult to predict which other goals this formidable woman might set herself. She does admit that she is also keen to try to look for leisure time with her family wherever she can. Finding a golden retriever puppy to be a pal for their dog Murphy has taken the family out of the kitchen, and Sundays are dedicated to hobbies and slower-paced activities. “When you love what you do, though, it’s hard to switch off from it. I’m motivated by passion.”