A move to the Borders countryside sparked a new chapter for the sculptor, allowing her to focus on her first love – horses 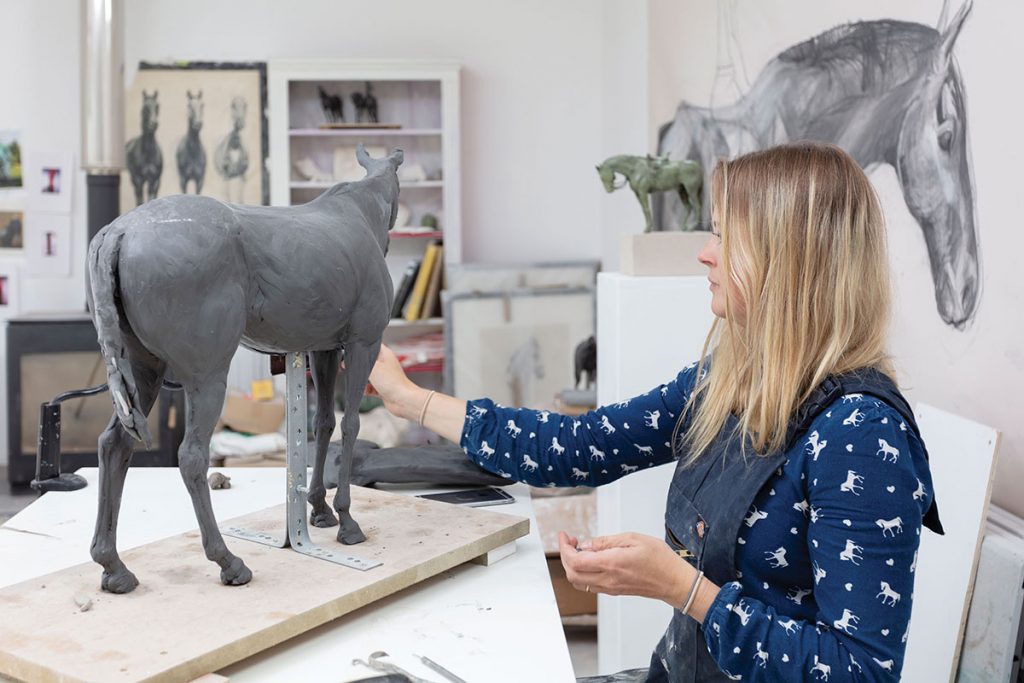 Frippy Jameson at work in her studio

Being an art student at the height of the Young British Artists’ success could have seen Frippy Jameson’s career take a very different route. It was the early 1990s and Britart and YBA fever was at its peak; artists like Damien Hirst, Gillian Wearing and Tracey Emin were coming out of London’s art colleges, creating experimental, conceptual works that grabbed headlines and commanded enormous prices. It must have been tempting to jump on the bandwagon.

But this fledgling sculptor was focused elsewhere: “I’d gone to Camberwell College of Art and Design to study fine art sculpture,” she says, “but the kind of figurative work I wanted to do really wasn’t encouraged. I knew that if I wanted to learn more traditional skills, I’d have to go elsewhere, so I switched to City and Guilds in London.”

Jameson relished the chance to work in different styles and learn new techniques, but she admits it took her a while to find her niche. “It’s hard when you’re young – I don’t think you’re mature enough to make those decisions. It was only as I got older that I gained a clearer vision of what I wanted to do for myself as an artist.” 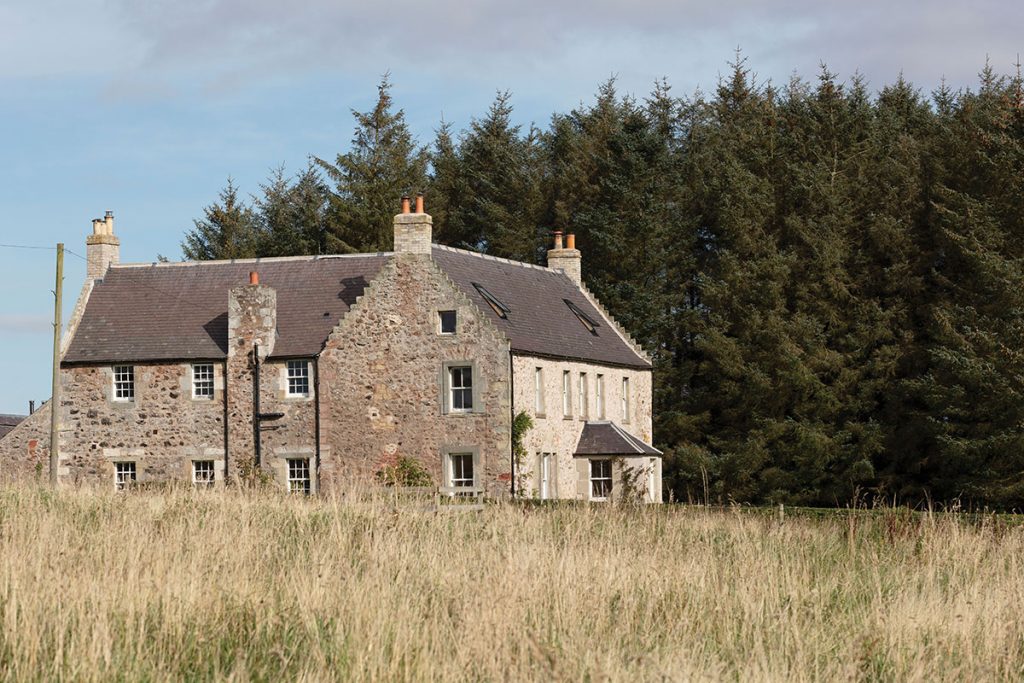 The large kitchen is where the family spend most of their time, but the house is full of interesting collections of objects and heirlooms designed to spark ideas and be a source of inspiration

During the early years of her career, she worked predominantly in portraiture, all too aware of the need to earn an income. “I was doing other jobs, too,” she recalls, “and I didn’t have the confidence to take risks.”

It wasn’t until she moved to Scotland, in fact, that she felt able to take the leap and start not only to sculpt in her own style but to choose her own subject matter. The change, she says, was partly down to suddenly having more space. “Before, I was always working out of tiny rooms, but moving here allowed me to do the kind of work I wanted to do.”

Jameson and her husband, Harry, had always known they’d leave London and move north. They lived in Edinburgh before looking to move to the countryside. His family are from Perthshire and hers have roots in Dumfries and Galloway, so it wasn’t particularly easy to find the right area to set up home. “Perthshire is beautiful but it’s very expensive, and Dumfries and Galloway felt a little too isolated. I only had two friends outside Edinburgh and they both lived in the Borders, so we started to look here.” 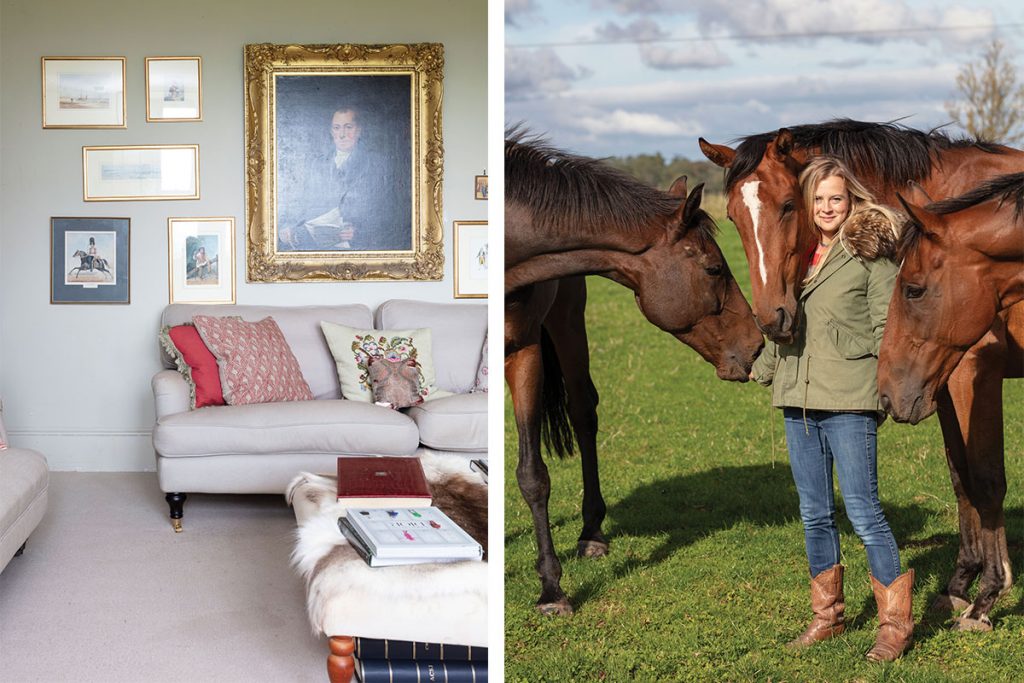 From left: The comfortable living quarters are an appealing blend of country charm and Georgian elegance; Frippy Jameson with some of her equine models. “I’ve befriended horse owners who kindly allow me to draw racehorses, polo ponies and hunting horses, depending on what I’m working on,” she says. “I’m lucky to have such variety to choose from.”

It wasn’t long before the couple found their home: a dilapidated farmhouse that had belonged to a reclusive local man who’d lived there all his life. Its vast open surroundings and collection of rugged outbuildings ticked all their boxes. This, they knew, would be a home that would welcome their three boys, two labradors, bull terrier and assortment of farm animals. One of the outbuildings was turned into an art studio; now, with the space and the light she needed, Jameson could really launch herself into creating life-size sculptures of horses – work that has brought her a good deal of success.

This passion for horses has been with her since childhood. “When I was about seven or eight, one of my friends had ponies. She and I would go up the hill near her house and we’d muck about with them, just enjoying the freedom of it. We spent hours with those ponies; it left me with a lasting enjoyment of being with horses and an appreciation of their innate sense of calm.”

It’s not just portraits of individual horses that Jameson sculpts. Her work is concerned with the majestic animals in situ, allowing her to create an atmosphere around the horse and to tell a story. “Being invited to show my work at an exhibition called Art in Motion: The Spirit of the Horse, at Messums in Wiltshire in 2017, was a really big deal for me,” she recalls. “It gave me the confidence to make the pieces I wanted to make, as well as giving me the funds to go ahead and not have to rely on other commissions.” 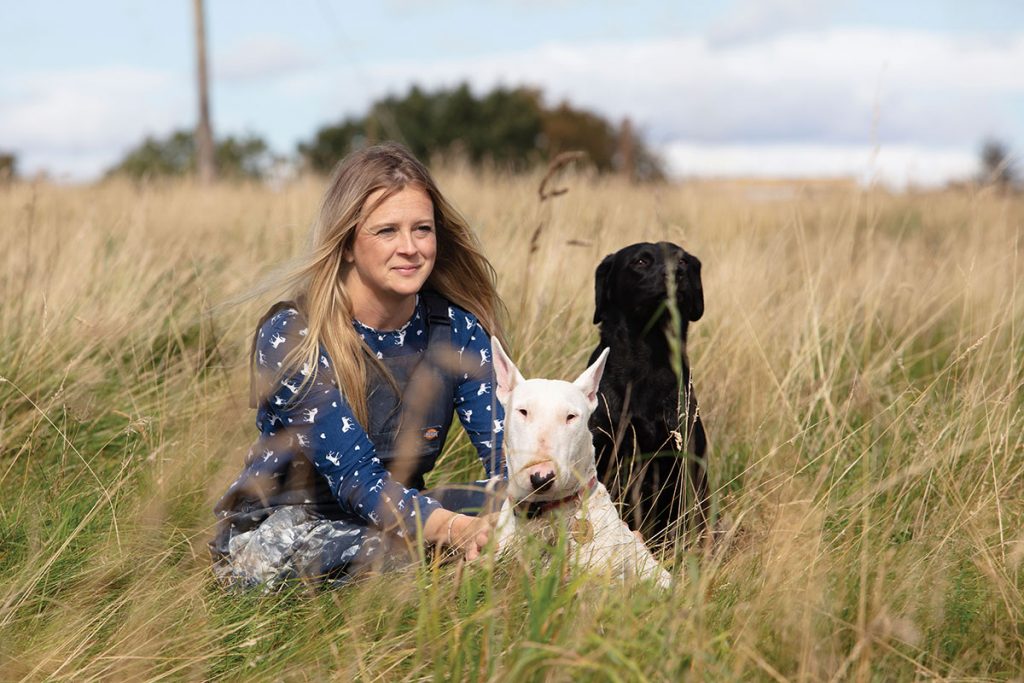 She works from life as much as possible, with neighbours letting her photograph and sketch their animals. “I’ve befriended local horse owners who kindly allow me to draw racehorses, polo ponies and hunting horses, depending on what I’m working on – I’m lucky to have such variety to choose from.”

The artist is just back from Switzerland, where she was visiting clients who’d commissioned a sculpture of their horse, a life-size piece to be displayed in the garden of their summer home in Portugal. As with most of her work, Jameson began this one with a drawing (“I do big, messy sketches!”) as well as taking photographs. Initially, she makes a maquette, or small model, a process which can take around eight weeks. This will be shown to the client for approval, and, once the go-ahead is given, Jameson will scale it up, working in Plasteline, a waxy, oil-based clay that won’t dry out, allowing her to work on different pieces at the same time.

The desire to improve and learn that was so important to her as a student is still a motivating force. “I’m learning how to patinate at the moment,” she says. Patinating gives a piece its sheen and colour and is usually done at the foundry, once a sculpture has been cast in bronze.

It’s a skill that Jameson is keen to master herself, under the tutelage of Brian Caster, a fellow sculptor and the co-owner of the Powderhall Bronze Foundry in Edinburgh. “To me, it’s the most technically challenging part of sculpture,” she explains. “I have to apply the correct patina and give to the bronze exactly the colour I hold in my mind. 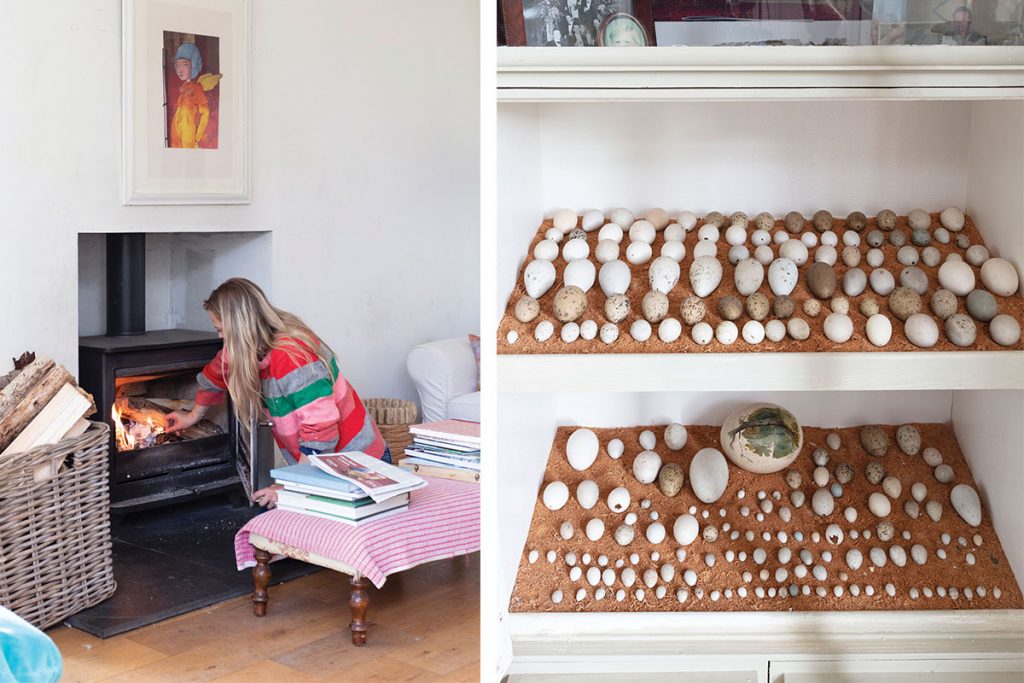 From left: The woodburner is essential in this old house; an extensive collection of birds’ eggs

“I’m always battling against having a shine on the work – I want my sculptures to absorb the light rather than reflect it. I have recently managed to achieve the verdigris effect I’ve been working towards, but it is a delicate balance of gentle heat and a very slow application of the chemicals, and that takes time. Browns and reds are relatively easy to control, but the green is much more difficult.”

Jameson has been encouraged by the sense of artistic community in Scotland, and welcomes this collective way of working and communicating as an artist. Her sister-in-law, the painter Hatti Pattisson, has helped her promote her work online, opening up the “lonely old existence”, as she puts it, of being an artist.

“I’ve only been living in the Borders for five years and I’m slowly getting to meet other local creatives,” she says. “The painter Frances Bell and the metal sculptor Craig Rae Ferguson live nearby. Hugo Burge of Marchmont Ventures champions Borders artists and makers – his sculpture collection at Marchmont House, near Duns, is phenomenal, and he has a passion for bringing artists together and allowing them to continue creating.” 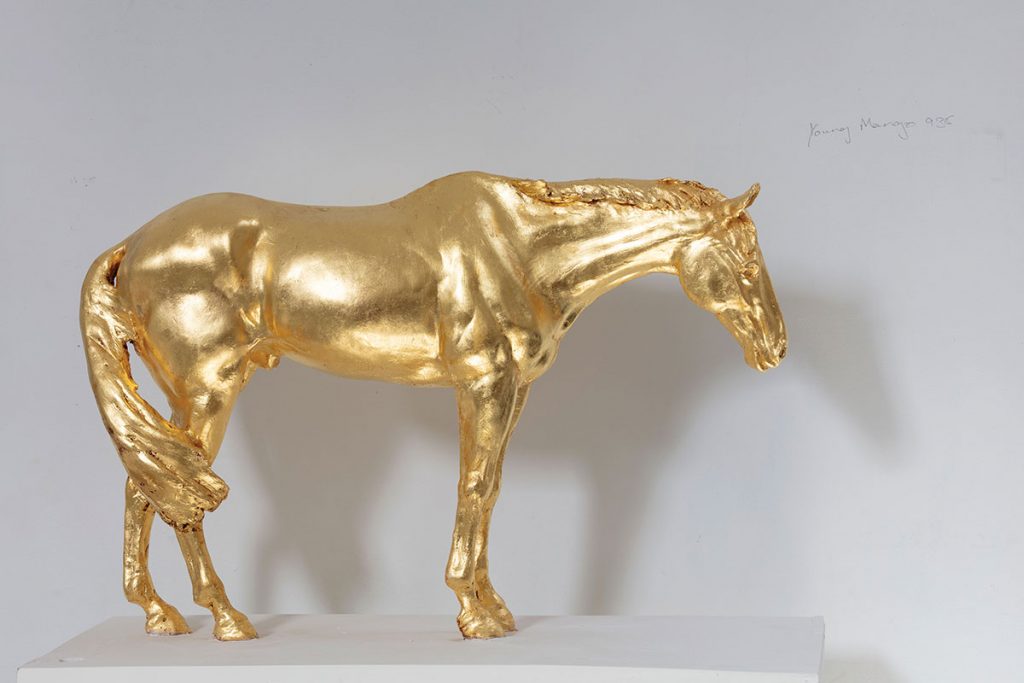 The sense of calm that Jameson loves in horses has found its way into her work, setting it apart from straight-forward portrait pieces. Her aim is always to create an accurate likeness, she says, but she wants to add something more, incorporating the setting and capturing the mood of the animal in that moment.

“A few months ago, I went back to photograph a life-size horse commission that had been installed in winter when the landscape was pretty dour. Seeing it again in summer, it had been transformed into a lazy, hazy place, rich with colour and perfectly still. I took thirty minutes to sit with the sculpture, thinking how fortunate I was to have had this opportunity. It’s really exceptional to get the chance to be commissioned by clients who trusted me to create the sculpture as I envisioned it and then to have it installed in exactly the right place to create the atmosphere I had strived towards.”

Her reluctance to follow the YBA line all those years ago must have felt risky at the time, but how right she was to choose her own path.

The success of this bedroom for Birch Castle in Sa

Chinoiserie velvet from @mindtheg is bold and intr

Give your table a makeover for spring with the Lui

Bring in the glam with a touch of metallic from Cr

Bring a slice of safari into your space @artewalls

Make the most of your great outdoors with the Eco

We spoke to @brazenstudios Sarah Raffel to find ou