What’s your favourite colour? It’s a question you’ve probably been asked a thousand times. It seems easy enough to reply without too much thought, right? But when it’s directed at your home, can it be answered as easily? You like blue, say – but is it indigo denim, Yves Klein or dirty petrol? And which lime green delivers the right punch? Could this be why most of us run scared when it comes to making a statement?

One person who certainly isn’t afraid of colour is internationally acclaimed interior designer Kit Kemp. Her bold approach has won her a global following and a reputation for having the kind of effortless, innate style money can’t buy. “I could immerse myself in strong colour and never pull back,” she says. “I am more frightened of beige than of any other colour in the spectrum.”

Her combinations of colour (and pattern) feel instinctive, insouciant and almost thrown-together, but that’s part of her skill; in fact, at the heart of it all is rigorous planning and an unwavering attention to detail. Where better to illustrate this than her own home in the Caribbean, a sunshine bolt-hole surrounded by nature.

“The site had a beautiful long palm-lined drive but just a very simple old house at the end of it,” says the designer. “We didn’t mind, but eventually we felt we could no longer keep apologising for the plumbing, so we decided to start again. The house was pulled down and rebuilt with the same idea that all the bedrooms were like little houses on their own, linked together by walkways. The main areas were enlarged with higher ceilings, and a master bedroom was built above the hallway.”

Despite the heat, she found joy in the building process. The project manager, carpenter and other local trades all had a firm idea of what she wanted to achieve. “The workers loved to laugh. The fact that we knew the site so well and had lived in the old house made it easier, too.”

The design is inside out. Oversized vertical shutters feature on one side and there are no visible doors between the living spaces. The master bedroom, with its large balcony, is the only room not on the ground floor. The other four bedrooms are connected by a covered walkway. Each has its own terrace and view of the sea or garden.

While Kemp’s bold colour choices make the spaces come alive, their success is also down to them working in harmony with the furniture. Welcoming seating areas invite you in to quietly contemplate the view, or just nod off for a while.

These sanctuaries are made even more beautiful by their mix of understated furnishings, textural details and distinctive art. “Interiors should never be a pastiche of the past,” she says. “Furniture should be comfortable and not too fashionable or it will date too quickly.”

The airy hallway, with its view through to the sea, has no furniture apart from a large round table holding candles in storm jars. The main entertaining area is open to the garden on three sides. It’s simple, with vibrant colours drawing you through or high-lighting specific areas.

“Each one should pique the curiosity and be a delight to the eye.” Strong colours burst out: turquoise blue, hot pink, alchemilla green and sunshine yellow are on ceilings and doors, chiming with the vitality of the sea and hillside.

Nature plays a massive part in Kemp’s creative process: “It was completely the reason we built the house in the first place. It is all about the garden, with little bits of it creeping in, and the views.” Monkeys and hummingbirds are part of the scene here. In fact, the high windows were put in to help the birds get out – they often find their way into the open rooms, but will fly upwards to escape, hence the windows near the ceiling.

“When we bought it, it was a very simple, lovely space, but there had been no thought given to interior decoration, which was really rather a relief.” Starting from scratch suited her perfectly. “I don’t like timid interiors. This is bold, not frantic, and feels perfectly in tune with the surroundings.”

Indoors and outdoors become one, cooled by the breeze that blows through the house. “It’s is so different to home in the UK and it’s exciting to live outside, the nearest thing to living in a treehouse without having to climb a tree, while the crickets and frogs make natural music.”

What does she love most about her Caribbean home? “The space. The sunsets. Watching the monkeys swing through the gully. The freedom to wear no shoes.” 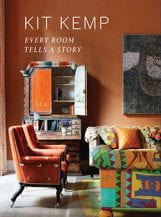 With beautifully presented editorial, lavish photography and quality advertising, Homes & Interiors Scotland is devoted to bringing you the latest in trends, interior design, architecture, gardens, art and property. As well as a substantial focus on kitchens, bedrooms and bathrooms the spotlight is on new and upcoming designers.
Check out this gorgeous spot at Brian McGrory & Ja

Counting down the days... What location is top of

AD | The desire for space and natural light is at

Bold colour and one of a kind pieces make this home extraordinary https://ed.gr/c52yp

This Glasgow tenement reflects the chic, colourful characters of its owners