After graduating from Glasgow School of Art, Lex McFadyen ran a successful fashion business before deciding to go back to his first love of drawing and painting. He lives in Argyll on the Crinan Canal and in Burgundy, France 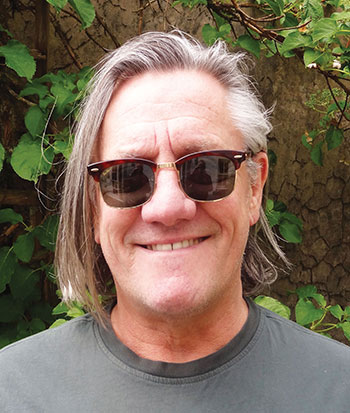 I’m very lucky now to split my time between Scotland and France. I have a studio in the medieval walled village of Noyers-sur-Serein in Burgundy, where the change of lifestyle, the slower pace and a different cultural approach have altered the way I paint and my choice of subject matter.

I was known for portraiture but after I stumbled on Noyers I made a conscious decision to include the essence of French life in my work. I feel it has added a more exciting, freer feel to my paintings.

I look out of my studio window and see a 14th-century priory; glance the other way, and there’s a magnificent 17th-century pigeonnier, or dovecote. Who wouldn’t be influenced by such surroundings?

I’ve always enjoyed painting dogs and this work gave me the opportunity to blend an iconic French image with a wealth of source material around me in France – ancient villages, the vineyards of Chablis and the many chateaux nearby, some crumbling and some fabulously restored.

I like to paint pieces with a French feel and then be able to exhibit them back in Scotland. I try to get across the different light and sharper colours of France. I involve objects, places and animals that mean something to me, that have had an impact on me. Often I start a painting in France and finish it back home in Argyll or sometimes vice versa. The final look of the piece can often be determined by where different stages of the work were carried out.

We run a pop-up gallery in Noyers for part of the year in a 16th-century butcher’s shop and for the past four years we have exhibited Scottish artists’ work there. The French have a definite affection for the Scots and we’ve been delighted by the response from locals and tourists alike. I like the idea of bringing a little bit of Scotland to France each year. Similarly, when I show my work in Scotland, I’m increasingly bringing something of France, my France, to my exhibitions.

I’m delighted that Upstairs at the Chateau can be seen at the beautiful Green Gallery in Buchlyvie’s Summer Show where this year I am the featured artist.