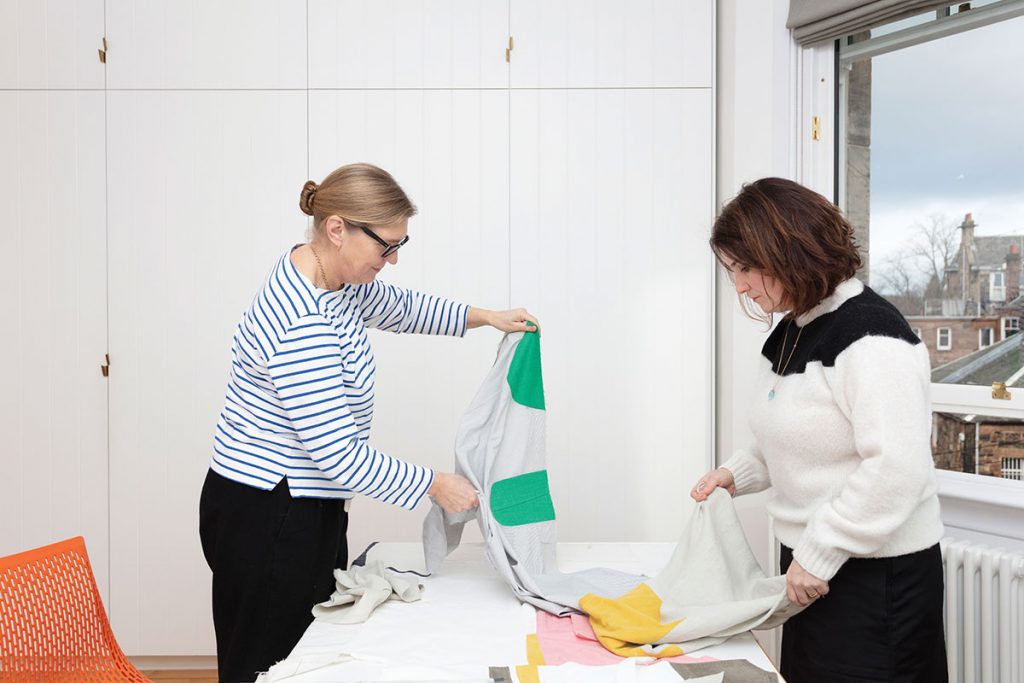 Where do you place quilting? Is it art? Craft? Is it interior decoration? Is it a hobby tied up in the romance of the past? Good friends Annabelle Harty and Sheelagh Boyce have addressed these questions, and perhaps raised more, with their collection of contemporary quilts, entitled ‘Arrange Whatever Pieces Come Your Way’, which they designed, made by hand and now sell.

Describing these quilts as soft furnishings or seeing them purely as practical objects does not do them justice. “They’re closer to material artworks, but suited to the methodology of quilt-making,” suggests Harty. “They can be hung on the wall, but spreading them out on the bed is a perfectly fine way of displaying them.” One artist, she says, recently bought a number because she felt they were right for the rooms in her new house.

It’s a shared passion for travel, food, modern architecture, nature and well-loved clothing that informs the design of the quilts, which have been described as ‘double As’ – because the backs are as good as the fronts. “We choose the subject then marry the two sides – one forms the other in more or less equal measure,” says Harty, who, with Boyce, collects, inherits and receives donations of used materials and clothes, mainly in cottons, linens and raw silks, which are then deconstructed to reveal their original shapes. 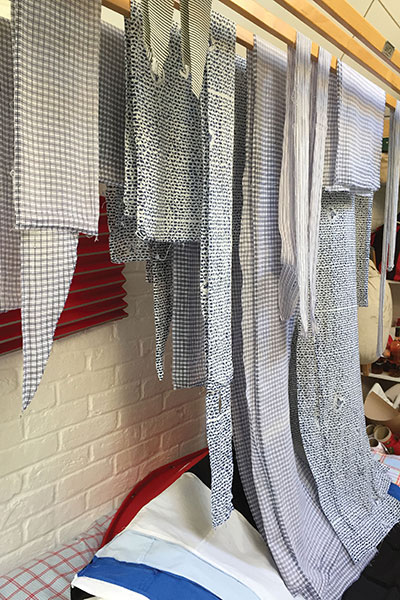 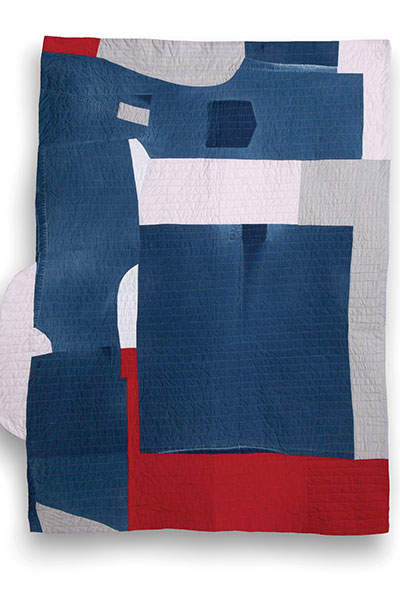 Quilt 1 is made from a well-loved Issey Miyake shirt 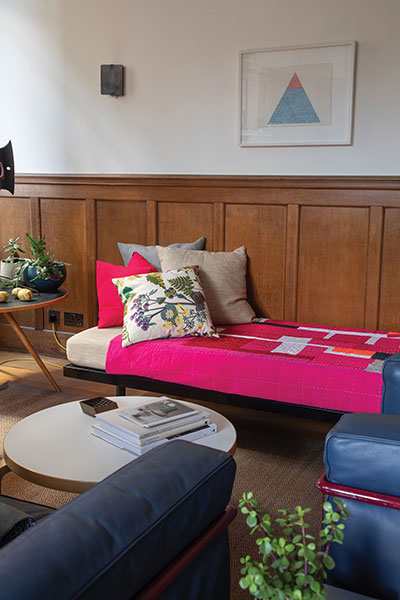 Quilt 2, made from a deconstructed shirt in pink and red cord 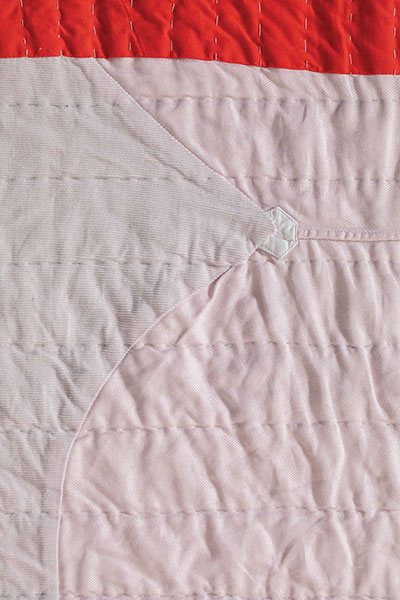 A close-up of Quilt 10. The vibrant red was once Martin Boyce’s favourite Comme des Garçons shirt

Each quilt takes months to make, although at the start there’s no predicting which stage will end up taking most time. It’s a deeply involved process that begins with the thinking behind the subject matter and the collecting and unpicking of the garments. Then everything has to be pieced together and positioned to make sense. There’s the sandwiching and pinning together of the two sides with wadding in between, and then the steady hours of hand-quilting.

Like the materials, the foundations of the long and steady friendship between the two women go back a long way. They met through mutual friends thirty years ago, when Harty moved to Glasgow to study architecture and Boyce was in her final year at school.

The latter, brought up in the south side of the city, trained as a primary teacher and met her husband, the future Turner Prize winner Martin Boyce, when he was an art student. While their two boys were young, the couple moved to Berlin, where she explored the paintings and textiles of the Bauhaus Archive. 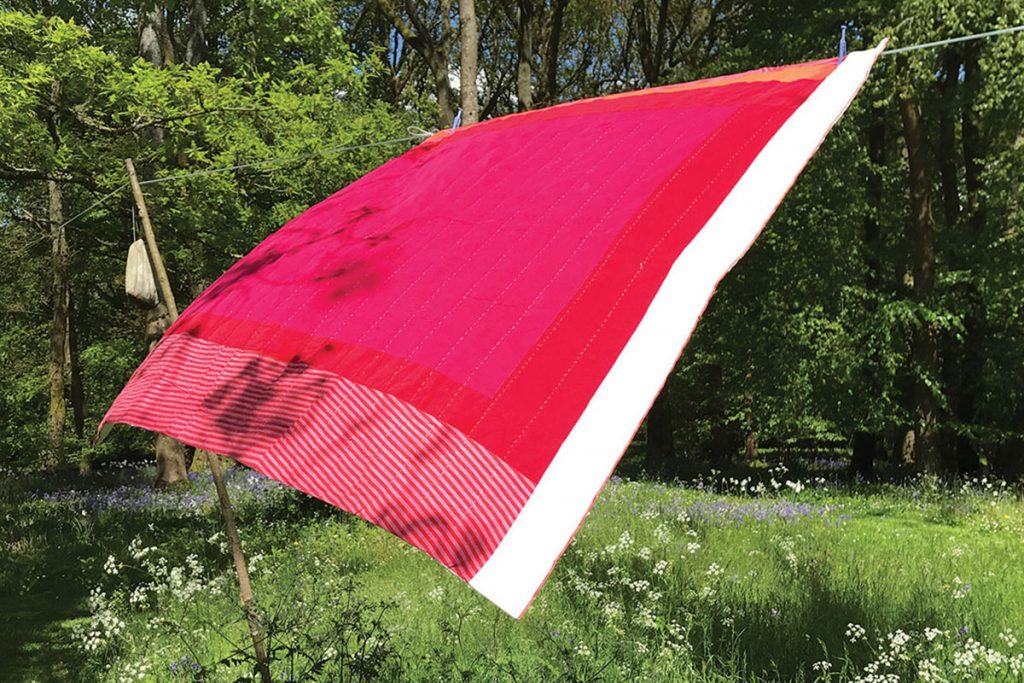 Quilt 8 billows on the washing line. It was inspired by the fabric strips that appeared when an April Crichton-designed skirt for Sonia Rykiel was unpicked

Back in Glasgow, she learned to sew on a course at The Stitchery with Patricia Macindoe (“master sewer and font of all quilting knowledge”), who taught her the essentials and principles of quilting. Boyce found herself most at home when she made mistakes following the Rail Fence quilt pattern. “I loved the skew-whiff lines where I’d cut a piece of fabric too thin or I’d sewn outwith the prescribed lines. Favourite artists like Ellsworth Kelly, Rothko and Hayley Tompkins came to mind when I laid one piece of fabric over another. I started to think that quilts could perhaps be more improvisational.”

Moving into an Arts and Crafts house, she arranged the modern furniture and contemporary art that had come her way over the years, and found they sat well with the period features. “Some of the original elements of the house are so inspiring in terms of the attention to detail and craftsmanship,” she says. “Having a sewing room-cum-studio to create quilts here where the old meets the new feels appropriate.”

Annabelle Harty was born and raised in London to parents who were architects. She followed suit, setting up Harty and Harty, a London-based practice with her husband (they were shortlisted for 2018’s Building Design Architect of the Year). 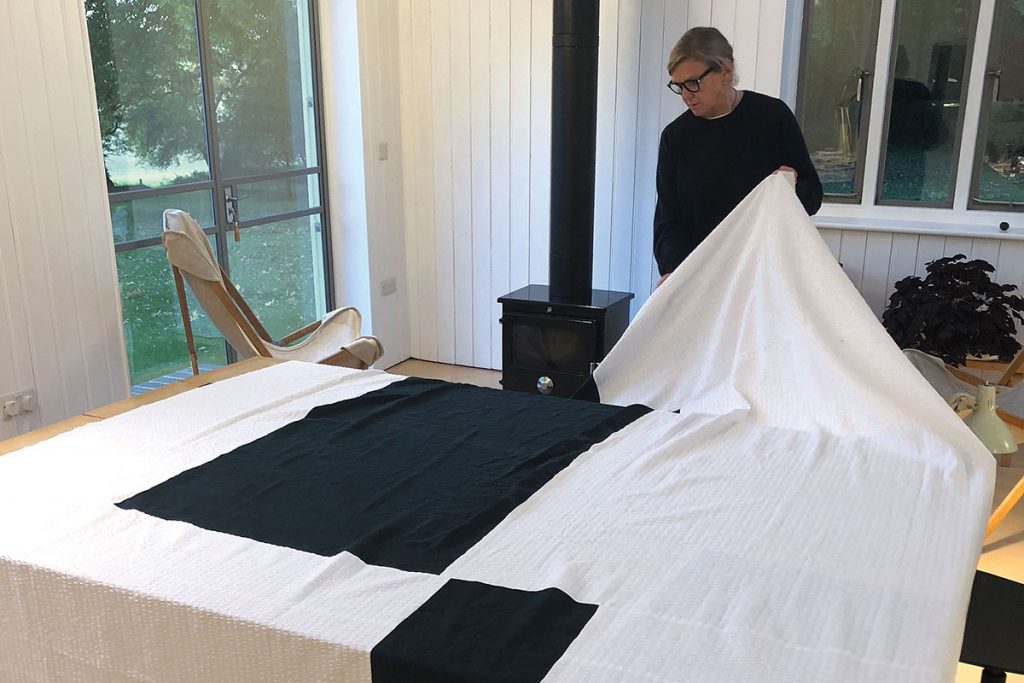 Annabelle Harty holds the reverse side of Quilt 9, inspired by the patched-up wall of an old corrugated-iron barn

“I guess one of the reasons why Arrange Whatever Pieces Come Your Way has taken shape now is because both Sheelagh and I are at that critical moment, often for mothers, when a clear horizon appears beyond parenthood, that opens up a new opportunity.”

But they didn’t start making quilts with business in mind. Rather, it was all about the pleasure of the process. “We loved it, and decided to make more – a collection of them,” says Harty. “It seemed important to view them as part of a larger idea rather than as individual pieces. Over the two years it took to make eight, we agreed that if none sold we would carry on making them. And if any did sell, and could facilitate exploration, discovery and adventure along the way, that seemed like a good business.”