Satisfying the whole family’s requirements, while being inspired by two very different worlds, this ‘shack’ is champion material

Portobello, Edinburgh’s seaside suburb, has more than its fair share of interesting new architecture to go along with its traditional tenements and Victorian villas. Konishi Gaffney’s Japanese house, A449’s stables conversion and Chambers McMillan’s ‘ramp’ house have all won plaudits in recent years, and now the trans­for­ma­tion of a crumbling garage in a back garden is generating similar acclaim.

The ‘Costa Rican garden shed’, as it is intriguingly known, emerged out of an idea that had been percolating in the minds of its owners, Ina Porras and James Mayers, for some time. Over the past 15 years the couple have been adapting their B-listed Georgian home to accommodate their growing family. “We designed and built a sitting room/kitchen at the back of the house about ten years ago,” says Ina. “It is full of light, and has double glazing and underfloor heating – a major requirement for me as a Costa Rican living in Scotland.”

The couple’s attention turned more recently to the old stone garage at the end of the garden. It had been built in the early 1800s as a stable. “The walls were more or less just rubble and the roof was collapsing,” says Ina. “It was really quite dangerous – we had to warn the children not to go near it.”

They spoke to their friends Ian and Thea McMillan, principals of local practice Chambers McMillan, architects of the aforementioned ‘ramp’ house. “We were looking for advice and trying to work out what sort kind of budget we’d need,” says Ina.

They were also still trying to decide what to do with the building. “We had lots of different ideas,” she admits. “James wanted a ‘proper’ garage for the bikes, the lawnmower, tools, rope and oil. I wanted a clean, bright place, with shelves and good light and white walls where I could take up my new sewing hobby with my daughter. The children wanted a place to hang out with their friends and play music. To add to the problem, we had a tight budget. It became known as ‘the impossible shed’ and we nearly abandoned it altogether.” 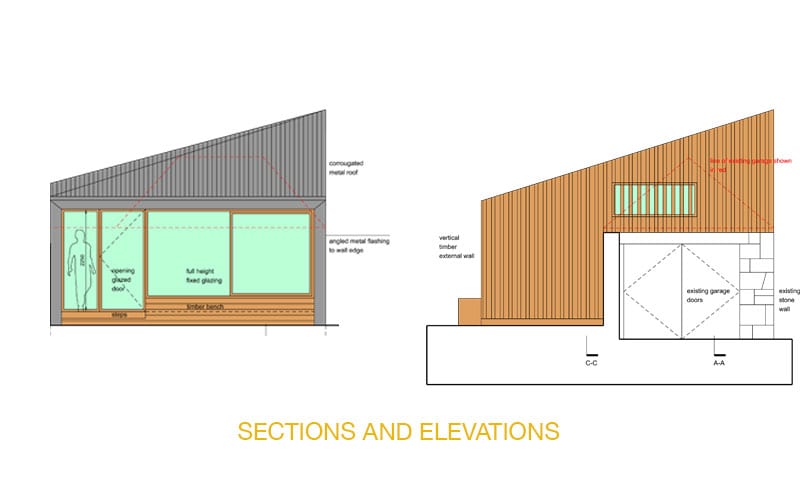 When it emerged that they’d need around £40,000 to rebuild it, Ina faced something of a dilemma. “I’ve always wanted to buy a place back home,” she says. “And for that amount, for a tiny garage, I could easily get a whole property in Costa Rica.”

The family were keen to stay put in Scotland, though, so it was decided to go ahead with the plan to renovate the deteriorating garage. Thea McMillan led the design sessions around the kitchen table: “We worked with lots of cardboard models,” she says. “The kids had loads of ideas. I think we started out with five different briefs!”

Eventually, she and Ian came up with a clever design that combined three ideas in one – a workshop, studio and den space. It has been extended into the garden with Ina’s glass-fronted studio section facing the back of the house. The studio connects the building more meaningfully with the garden, with a bench along the long glass façade now providing a favourite place to sit in the sun.

A workshop space has been retained to the back of the building, with a mezzanine area created above the studio. This was made possible by the asymmetrical pyramidal roof. “We did a lot of 3D studies to ensure the new roof wouldn’t overshadow anyone,” Thea explains. “That’s why it’s this shape – it gives the optimum space within, without overshadowing any of the neighbours.” The concealed window behind the strips of larch cladding allows those inside to see out but not be seen themselves.

“While we were looking at costs, the idea of a tin roof was discussed,” says Ina. “James’s family has an old holiday cottage in Scotland whose garage has a tin roof. And tin roofs are what I’m used to in Costa Rica. We told Ian and Thea about it and they suggested this. I love the sound of the rain on the tin – it takes me right back to Costa Rica.”

The black profile cladding with yellow framing juxtaposes the cultures of Scotland and Central America. “We kept as much of the original stone as we could, and the black corrugated metal roof, which is a nice easy material to use and relatively cheap, references traditional Scottish bothies as well as Costa Rican sheds,” explains Thea. “There’s something of the outdoors about it. It’s more like a shed or a shack – it doesn’t feel like a house – and the materials emphasise the outdoors connection.”

Keeping within the £40,000 budget was a challenge. To save money, the family took on the tasks of painting the interior and sanding and varnishing the floors. They also decided to insulate the studio but not the workshop or mezzanine. “We thought of putting in more insulation later but it’s working out really well the way it is,” says Ina.

“The studio is insulated and we have an electric heater. The glass is very thick, so if I put the heating on 20 minutes before going in, it’s very cosy. We also thought of putting in soundproofing, as our son plays the drums, but this would have been too much. The drum kit is played in the basement of the house for now, but this will make a fantastic rehearsal space one day if need be.”

Indeed, the new space has hit the mark with the whole family so far. “The studio is that dreamt-of space where you can go when creativity strikes. I like meeting with friends in there too. It’s an intimate space, where we can work and sew and talk, and share a bottle of wine.”

She has called her new studio ‘Osa’ after the famous peninsula in Costa Rica. “It’s renowned as ‘the most bio­diverse place on earth. It’s near my hometown and we love it. And this building, in a funny way, is a link to it, thanks to its tin roof and big windows where we see the seasons changing and can watch the birds and squirrels – no monkeys or snakes to watch, though!”

The mezzanine, also known to the kids as ‘the tree­house’, is a favourite hangout, with a great view over the park next door. And in the workshop James has room for all his tools. “It’s an extension of our home, yet at the same time it’s separate enough to be a different space to retreat to,” says Ina. Everyone is happy.