A lifelong obsession with design has blossomed in this house, turning it into a quirky and characterful home 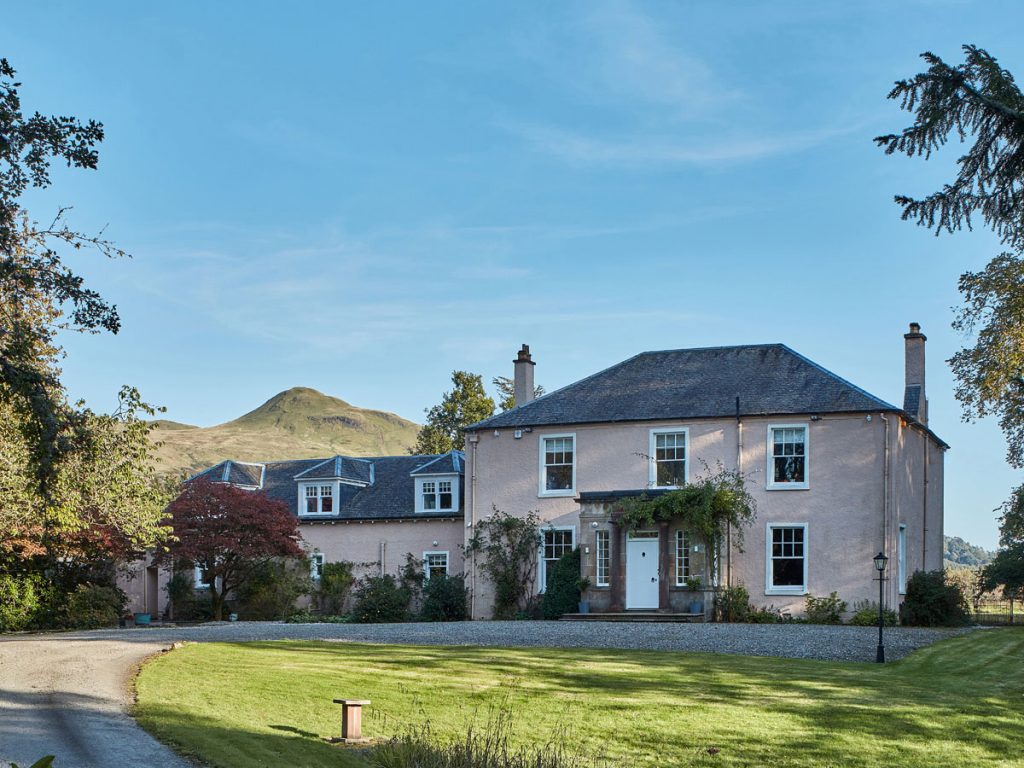 A youthful obsession with the Laura Ashley home furnishings catalogue and the influence of a mother with a real flair for interior design were early clues that Karen Livingstone Welstead was always going to grow up to have a rather amazing house. And so it has proved: the six-bedroom Georgian country pile in Stirlingshire she shares with her partner Matt and their three children is refined without being stuffy, full of personality without being OTT – a modern family home that has been designed to be lived in.

But it has taken a lot of work to knock it into shape. “The same family had owned it for more than 30 years when we took it on – it was in need of some attention,” she says. The heating, plumbing, kitchen and bathrooms were ready to be updated and refreshed.

Welstead might initially have been hoping to concentrate only on the interior design, but with so much work needing doing, she took on the role of project manager when it came to remodelling and decorating the whole house. 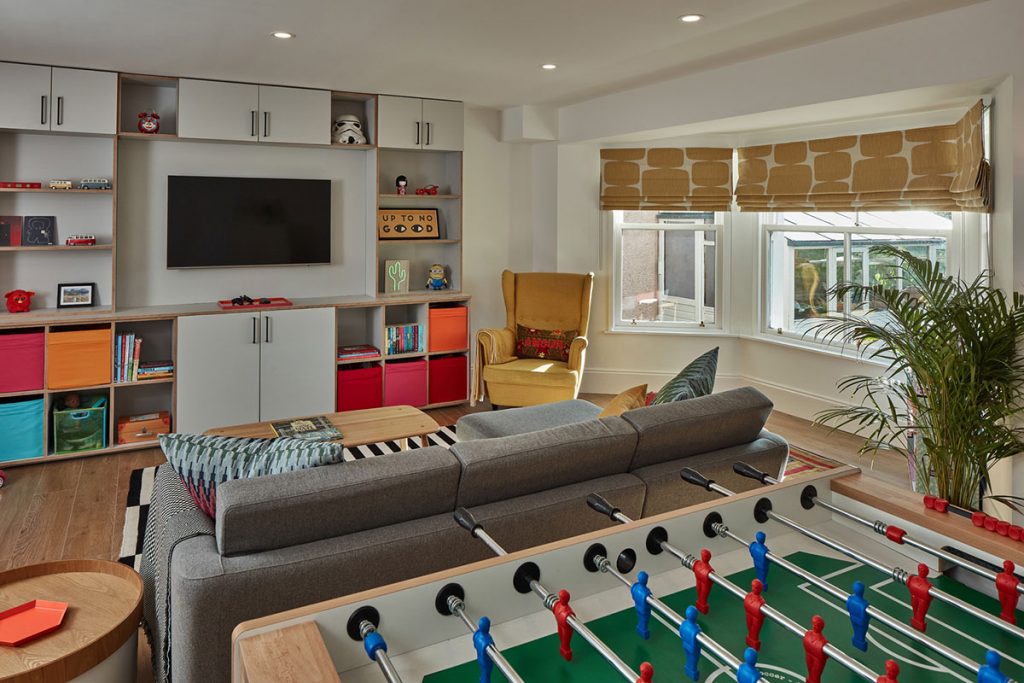 The kids’ playroom bursts with bright details such as the blinds, made from Scion’s Lohko fabric

Prior to this, the couple had lived not too far away, at the picturesque Tannoch Loch in Milngavie, and before that they’d both worked as bankers in London. That was eight years ago. “We moved north looking for a house exactly like this one, but there was nothing on the market. We ended up buying my parents’ house in Milngavie, which was fabulous for a young family. We had great friends and could walk the kids to school, but we always dreamt of living in a more rural location, with more space.”

Now they have more than their fair share of countryside right on their doorstep – the house came with a large lawn at the back, a pond, 20 acres of fields and some wild woodland.

Welstead’s love for interiors and eye for detail are most likely inherited from her Norwegian mum, Sissel, who has an innate flair for design. “There was always a strong Scandi aesthetic in our house, with wooden floors when everyone else had carpets. And we always had candles and white Christmas lights, never multi-coloured ones!” 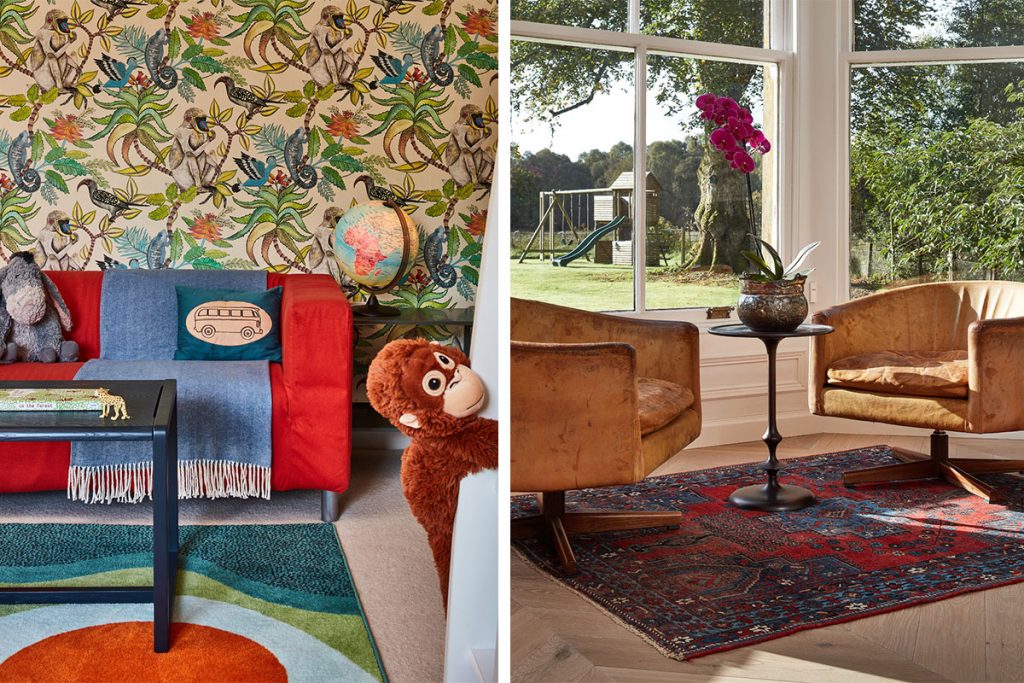 From left: Cole & Son’s jungle-inspired Savuti wallpaper creates a playful feature wall in this bedroom; The everyday TV room, meanwhile, can comfortably accommodate two heirlooms in the form of the pair of tan leather chairs at the bay window

The inspiration for her home decor also comes from travelling, hotels and art, and has spilled over into a business where she supplies furniture packs for rental properties. “It began with us developing small flats to rent out; I would always furnish them the way I’d want to live if I was renting – so it would feel like a home – and people started asking me to do the same with their properties. It has become a business, and I also dress homes for sale.”

The family moved into the Stirlingshire house over the course of a weekend, and had the builders starting work on the original Georgian part of the house by the Monday. During these renovations, the Welsteads, along with Murphy the dog and Miss Moneypenny the cat, settled into the extension.

Happily, it was on the generous side, with three bedrooms, a living room and a kitchen. “The ancient Aga kept us toasty and we tried to think of it as an extended holiday. We’ve been through house renovations before – including once when the kids were tiny – so we consoled ourselves with the thought that it would all be over one day.”

Once the main part of the house was finished, they swapped sides with the builders and within 12 months the work was complete. The problematic areas had been fixed, such as the kitchen, where a wall was knocked down to open up the space to the sprawling back garden. Not having a blank canvas was a positive, in Welstead’s view, as it kept the important things in focus. She managed the project with the builder, working out the priority areas and bringing in experts who could come up with the best solutions. 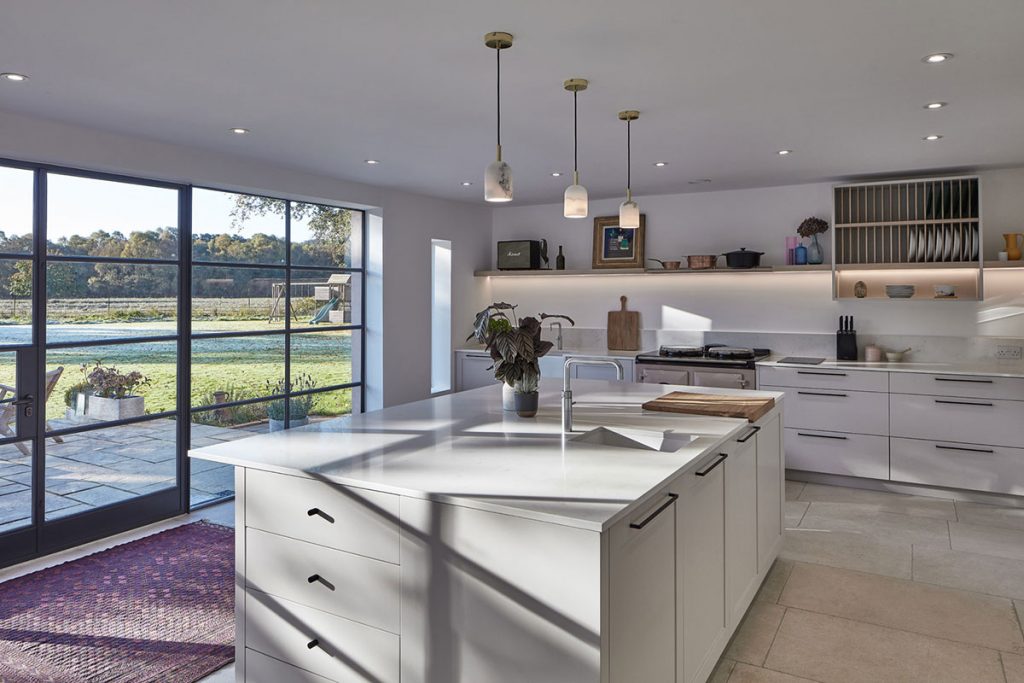 The kitchen, from Cameron Interiors, has a clean, furniture-like appearance. The Crittall windows contrast with the light cabinets and limestone flooring, while the slender matt black handles complement the industrial look

One of those experts was Kirsten Robeson of Cameron Interiors, who was engaged at the early stages to collaborate on the kitchen design. “The colour that had been chosen for the new Aga was the inspiration, to be honest – it’s beautiful and timeless, and we had to complement that,” says Robeson.

Handmade in the UK and painted in Farrow & Ball Cornforth White, Cameron Interiors’ kitchen units are as stylish as they are functional and are smartly offset by the pale limestone flooring. The island, meanwhile, forms a sociable hub and has been positioned to take in the view out through the new Crittall windows.

Architect Donald Bentley was also involved in the remodelling, dealing with many of the technical details as well as working out a solution to a tiny hatch door between the old and new parts of the house. “We wanted a master suite with a large dressing room, and this wee door with ladder-like steps connected the en-suite and dressing room,” says Welstead. “I’m convinced I would have fallen down them one morning had we not built a proper stairway.” 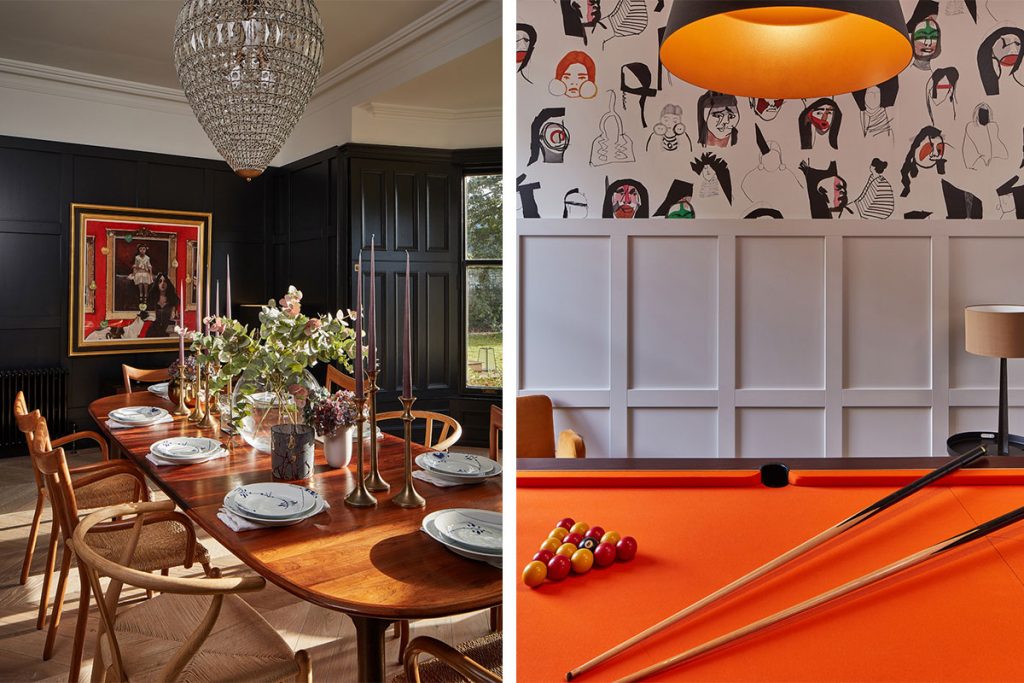 From left: Bespoke panelling painted in Farrow & Ball’s Railings creates a moody setting for the dining room. Oak chevron boards from Miller’s Flooring have been laid throughout the ground floor; The zesty pool table and head-turning Pierre Frey wallpaper have transformed what was once a dull office

Her decor scheme was largely dictated by the style of the house – sympathetic to a Georgian sensibility but not stiff or serious. “The Georgians embraced rich and dark colours, which allowed me to push my husband’s boundaries. Besides that, I’d been collecting ideas for a modern country look for years. I was aiming for Babington House or Cowley Manor, though on a smaller scale and with a fraction of the budget!”

Many of the period features had been removed by a previous owner, so cornicing and ceiling roses were reinstated in a plain Georgian style. Panelling has been added too, to match the originals around the windows and shutters.

She sketched out designs for the shelving and units in the boot room, playroom and dressing room, for the builder, Mark McKinnon at We Are Make, to interpret. He, together with joiners Shug and Jerry, who made the panelling, were happy to mock up prototypes to confirm the proportions were right.

The flooring had been a bit of a mishmash, and when it all had to be lifted to allow the heating system to be updated, it was the ideal opportunity to lay one single cohesive style throughout the ground-floor reception rooms – an oak chevron pattern from Miller’s Flooring. 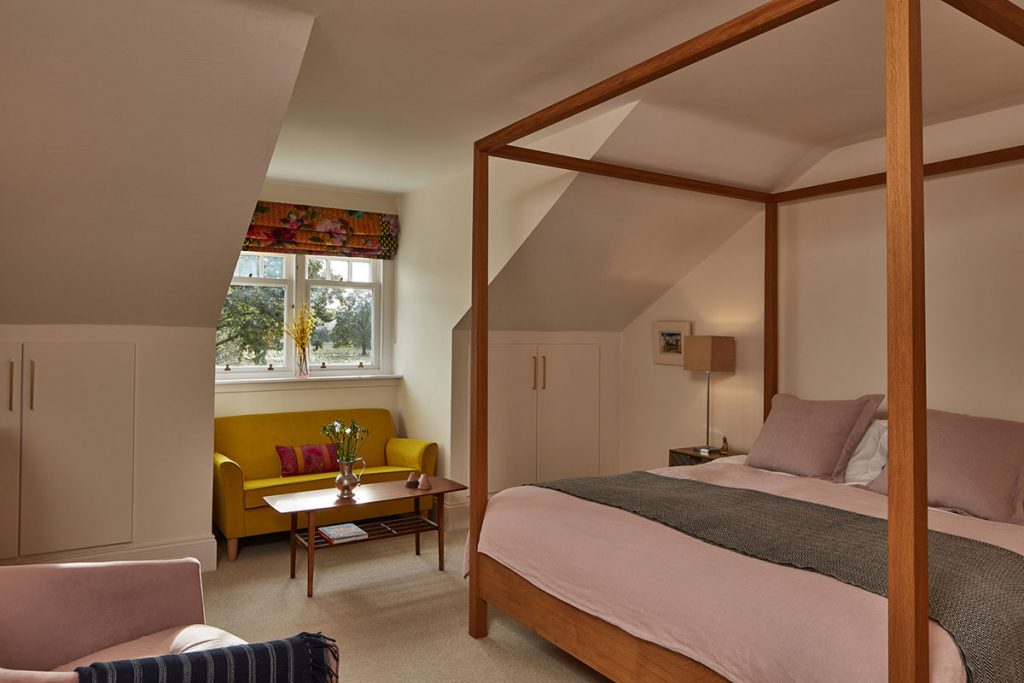 The budget has been managed sensibly. Howdens units in the utility room, ceramics from Topps Tiles and taps from Bathstore in the spare bathrooms, and a plumber’s merchant for many of the white goods were all easy ways to cut costs without compromising on finish. “I don’t feel the need to restrict the choices to the expensive big names,” Welstead shrugs. “In any case, we wouldn’t have been able to afford to do the whole house if we’d spent 20 grand on one bathroom.”

What she has crafted here is far more than a stylish interior; it’s a genuinely happy family home. In the evening as the light begins to fade the five of them gather in the sitting room, play pool or head out to the pond to look for otters. “It has been an absolute privilege to decorate this house. And because we love it so much, it has been really easy to make the right choices.”