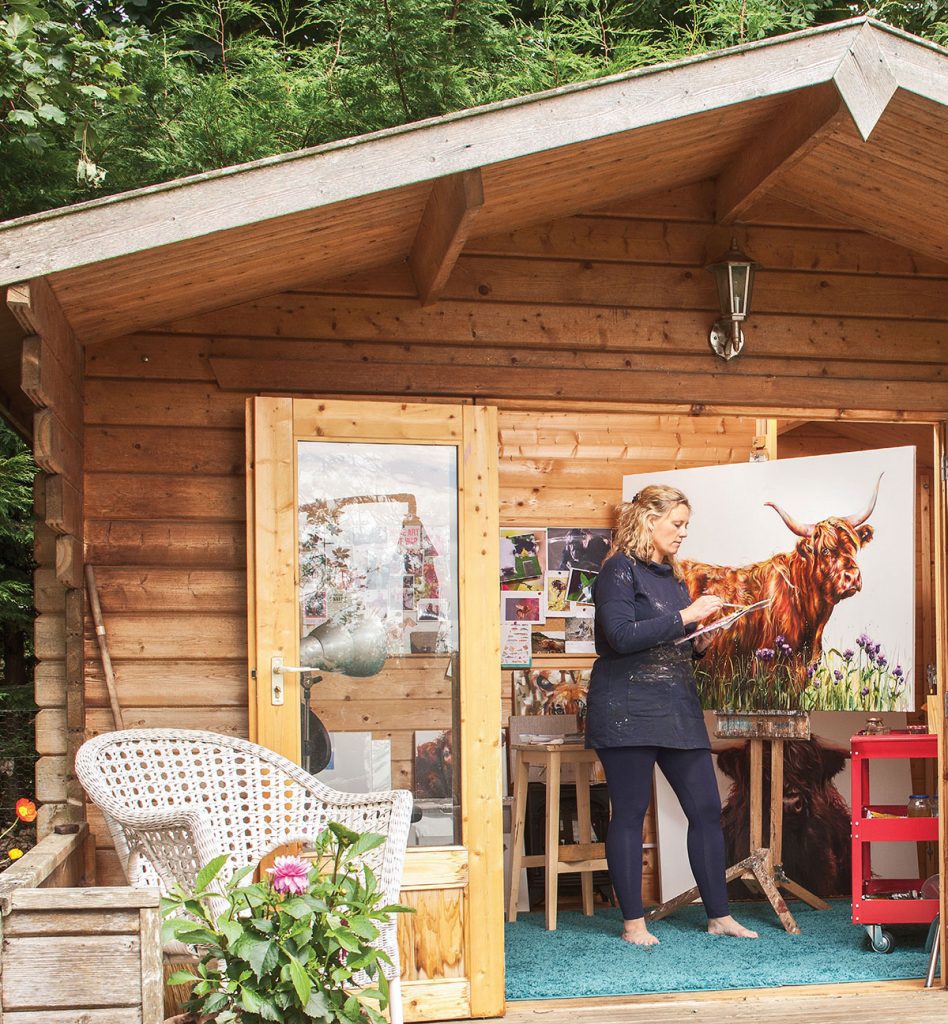 Georgina McMaster is beaming as she opens the door of her Aberdeenshire cottage. Not only is the artist preparing for an important solo show at Bearsden’s Lemond Gallery, she is also expecting her first child in the new year. She’s nesting; the whole house has been redecorated and she’s busy trying to get as many canvases as possible ready before these two very important deadlines.

“I would normally work crazy hours,” explains Georgina, who moved here three years ago, “but at the moment, I’m so tired, I have to stop earlier in the evening to rest.”

Her story is a young artist’s dream. After juggling painting and teaching for as long as she could, she gave up the latter three years ago to focus full-time on her art. Despite enjoying massive popularity – her instantly recognisable paintings are held in private collections all over the world and she has a strong fan-base at home in Scotland built up over the last decade – her career as a professional artist still feels like it’s in its infancy.

She cites two events as the catalyst that propelled her from would-be painter to bona fide professional artist: she was included in the 2007 RGI First-Time Exhibitor show, where she won the Royal College of Physicians and Surgeons of Glasgow Award, following this up a year later with the David Cargill Award. “Winning those prizes was invaluable in getting my name out there and having galleries ask to exhibit and sell my work.”

Georgina’s work is typically Scottish yet at the same time singularly unique. While she has painted portraits of people, her subject matter of choice is always animals; as such, rural Aberdeenshire, surrounded by wildlife, is the ideal base for her. “I’ve drawn and painted for as long as I can remember,” she says. “My gran was an artist. She used to pick us up from school and was always getting us to make things.”

Her sisters are also creative: Jo runs an artisan bakery and catering business, while Sally, who also studied fine art drawing and painting, now works as a florist in their home town of Kilmacolm, in Renfrewshire. “My mum was a qualified florist and although she had no formal art training, she has always had a great eye for design, interiors and colour. I sometimes try to get her to draw. I think she could have been an artist – she’s got it but it just maybe passed her by.”

For the young Georgina, there was never really any other path she wanted to follow. She was hooked from an early age. At school, her art teacher would pull up a chair beside her easel and explain exactly how to mix colours, create texture and get the composition right. “She was wonderful, Mrs Robinson – and I still see her!” she laughs. “She comes to my exhibitions and I’ve met her at teaching conferences, too.”

As a student at Edinburgh College of Art Georgina focused predominantly on figurative work, but even then she preferred working on animals. “I’ve always loved them,” she explains. “Growing up, we always had horses, dogs and cats around us. I enjoy the texture of animal hide – the feathers, the fur – and the wetness of noses and the spirit in the eyes. Trying to achieve that texture, that look, and make it appear so real that you want to reach out and touch it – it’s so much better than human skin!”

From those initial paintings of hares that won her the RGI awards, Georgina’s favourite sitters have taken her all over the world. Seeing animals in their natural habitat, she insists, is so different to viewing them in a zoo or a reserve, and she has always painted the animals that she has seen on her travels. In India, for example, she took a guided safari to see tigers (her favourite subject is big cats), during which sightings of the animals were few and far between. But towards the end she got lucky; the guide brought her to see three cubs playing together and then arranged for her to venture into the jungle on the back of an elephant so she could get up close but still be safe. “It was incredible!”

This trip was followed by many more; the artist now works with Edinburgh Zoo, too (she donated the money to fund an elephant there) and she spends a lot of time photographing and sketching her subjects from as close quarters as possible.

Her next trip was scheduled to be an African safari but those plans are on hold until after she gives birth. In the meantime, she is happy to immerse herself in the local Scottish wildlife around her studio, and has plans to visit Jura. “My trips are nearly always organised around the animals I want to paint,” she laughs.

Her husband Alex, an Italian helicopter engineer, is now used to building Georgina’s work into their down-time. On their honeymoon, the couple chartered a yacht to sail around the Dalmatian islands where Georgina, underwater camera in hand, sought out new subjects below the waves.

Back on dry land, she regularly arranges visits with estate rangers, so that when she’s out in the hills, on the lookout for animals, she has a better chance of sightings with those who know the terrain and the species best. Today, though, she just has to look out of her kitchen window to see some Highland cattle, or head out to her garden, where her dog, Poirot (named after one of the family’s favourite shows) is ready to be captured on canvas.

She and Alex live in a traditional four-bedroom house with a contemporary interior, and plenty of wall space to hang works of art. Although there are a few of her own canvases on display, she prefers to show other artists’ work, gravitating towards those whose style is markedly different to her own. “I appreciate work that I couldn’t necessarily do myself,” she admits, motioning to a group of landscapes. In the living room, she points out a recent acquisition – a joyful, colourful landscape by fellow Scot and relative newcomer Garry Brander. On the adjacent wall hangs a Chris Bushe seascape, the layered paint technique heavy with atmosphere.

Alex’s passion for good design is clear to see; in the living room is Nemo’s Mr Light by Javier Mariscal, and the Spartherm Arte wood-burning stove was a must-have. “One year when we were skiing in the Dolomites, Alex spotted it in a bar. He thought it was really cool and wanted to have one in our house.”

Furniture is a mix of classic country-cottage pieces and local finds. Georgina is a big fan of Willow Cottage furniture – upcycled pieces by Deborah Buchanan, who has her own independent boutique in nearby Ellon. “She uses a lovely paint called Autentico, which is chalky and really easy to use. I love it.” 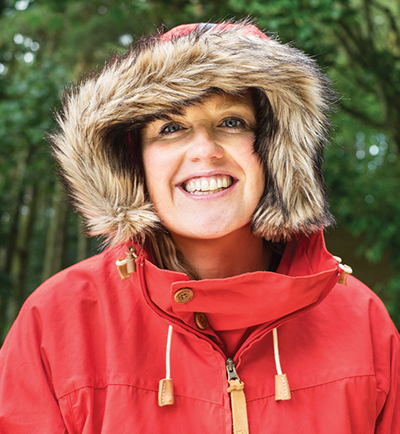 The couple’s kitchen manages to be both a sleek modern affair (it’s a handle-less German style by Rotpunkt from Ellon-based kitchen company John Willox) and a cosy, accessible space where the farmhouse table is a space to entertain friends or sign limited-edition prints before sending them off to galleries. Outside, Poirot enjoys the courtyard, bounding off uphill as Georgina makes her way up to the back of the garden, to her summer-house studio. This is where she paints. Its elevated position gives great views across the landscape but it’s also secluded; a bit of a hidden den within a leafy secret garden.

The studio space is neat; engineer Alex has made lots of hanging containers to store and organise his wife’s paintbrushes, tools and supplies. There are canvases and photographs everywhere; works in progress, pieces ready to be sent to her framer, 80-year-old Owen McGuire, who also happens to be the father of her agent and friend Fiona McGuire; works to be shipped to family-run firm Edinburgh Arts, where prints are taken and limited-edition runs are created. “I work in oil paint and I layer it, so I’m always working on more than one canvas at a time,” explains the artist. “While one is drying, I will be adding to another.”

There’s a recent work she did of Poirot the dog for Alex’s birthday. It’s in a looser style than usual, she explains, a technique she enjoys and an indication of the diversity in her work. Although the strokes are freer, she still manages to capture the detail, in almost photographic precision, of the animal’s expression. Her draughtsmanship skills are impeccable, of course, but what she manages to do is stretch it beyond photorealism to capture the character and soul of her subject, whether it’s a dog, a cow or an Indian tiger.

The bucket-list of adventures is long; the dream, she says, is to see polar bears at home in the Arctic, but before long she’ll have her own cub to observe, and inevitably, her animals might make way for a new subject.