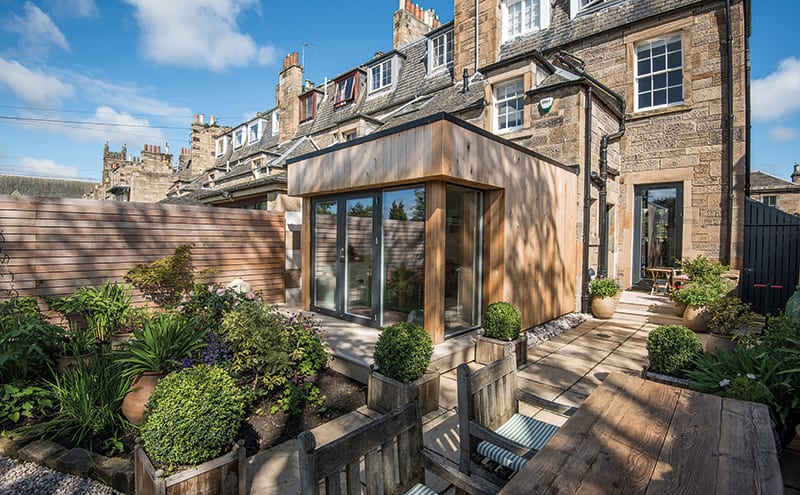 BRIEF To transform a neglected space into a garden in which a passion for plants could be fulfilled. The clients wanted to maximise the views, be able to enjoy the space all year round and have a sunny place to eat outdoors. Satisfying these desires informed both the planting and the decision to build a separate garden room.

BIGGEST CHALLENGES Working in a small space with relatively acidic soil, and operating within the restrictions of a conservation area.

Imagine a petite south-facing garden with views towards Edinburgh Castle and the iconic Old Town skyline. Imagine sitting outside in a sun trap, relaxing and soaking up those views, surrounded by unusual species. This is reality for one couple, who use their garden as if it were a favourite room in the house. Through unflinching commitment to their vision, they’ve created an outdoor space where they can enjoy their love of gardening all year round.

This south-facing garden belongs to a Victorian terraced house in the capital’s west end, and is densely planted with a wealth of perennials and shrubs. In the south-west corner is a garden room that complements the property’s contemporary rear extension. 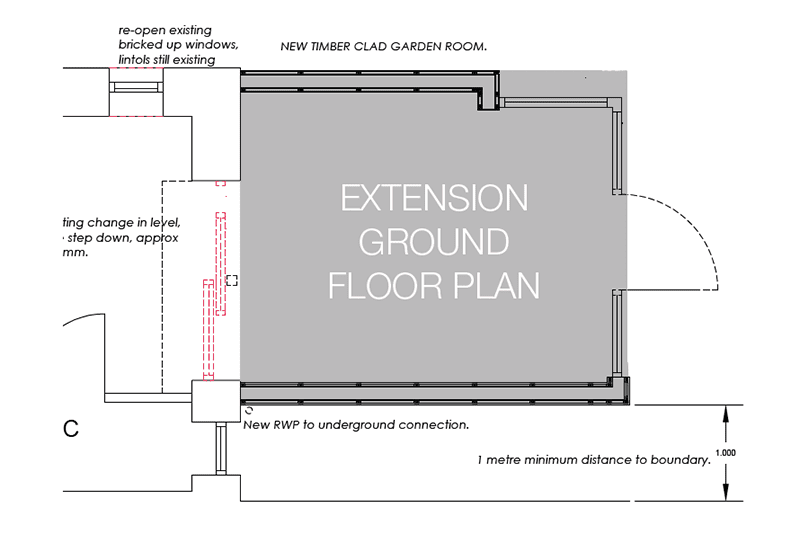 It’s an urban idyll now, but it wasn’t always like this, as John Langley of JML Garden Rooms, who was instrumental in transforming the space, and who also designed and built the garden room, explains: “The project faced a number of key challenges, not least of which is the fact that the property is in a conservation area, so work had to be sensitively managed and designs had to complement the heritage of the location.”

The garden was very neglected and overgrown when the owners bought the house. There were good stone walls to the east and south, but to the west was a dilapidated shared fence that needed replacing. Adding an extension was top of their list when they moved in, but a garden room was also on the cards, so they had to bear this in mind when working out what was going to go where in this small site.

With space at a premium, they knew they’d have to maximise every inch. Given the state of the garden, they began by removing almost everything that was there so they establish exactly the dimensions they had to work with. As they cleared the site, though, they made two unhappy discoveries. First, a large amount of dressed stone was found, which had to be removed to make space for plants. Next, the soil was revealed to be relatively acidic, which gave them concerns over what would grow here.

Left with just two trees and a strip down the centre of the existing lawn (where a large number of plants they’d brought from their old home were overwintered), the owners embarked on the next stage of their planning. Over the course of many months, they carefully observed the sunlight (and temperature), noting when and where it fell on to the space, then earmarking the best spots for a sitooterie and specific plants.

John Langley reveals the thinking behind the design

With nothing left to chance, they were able to lay out their garden to take full advantage of space and sunlight. Their observations also determined the dimensions of the extension and the precise location of the garden room. Even the shady spots have been put to good use: half-hidden behind hedging are the potting shed and gardening workspace – storing the tools of a lifetime’s passion.

“The work was managed in consultation with the relevant authorities to ensure trees subject to Tree Protection Orders were not impacted and that the finished garden was reflective of the heritage of the area,” says John Langley. “An agreement was reached with the neighbours to share the cost of replacing the fence with a high cedar structure to match the garden room and extension. The layout was really important to the owners, so mapping out a design took priority over finalising the dimensions of both the extension and the garden room. Once planting space and outside eating areas could be accommodated, the plans for both structures could be confirmed.

“The clients extracted the dressed stone which was then recycled as edging material for the pathway. Despite having relatively little experience of gardening on acidic soil, the owners thoroughly researched the subject and were delighted when, in 2017, their meconopsis flowered generously.”

With beautifully presented editorial, lavish photography and quality advertising, Homes & Interiors Scotland is devoted to bringing you the latest in trends, interior design, architecture, gardens, art and property. As well as a substantial focus on kitchens, bedrooms and bathrooms the spotlight is on new and upcoming designers.
Check out this gorgeous spot at Brian McGrory & Ja

Counting down the days... What location is top of

AD | The desire for space and natural light is at

Bold colour and one of a kind pieces make this home extraordinary https://ed.gr/c52yp