The designer’s work is all about dazzling colour paired with innovative patterns, as her home beautifully demonstrates 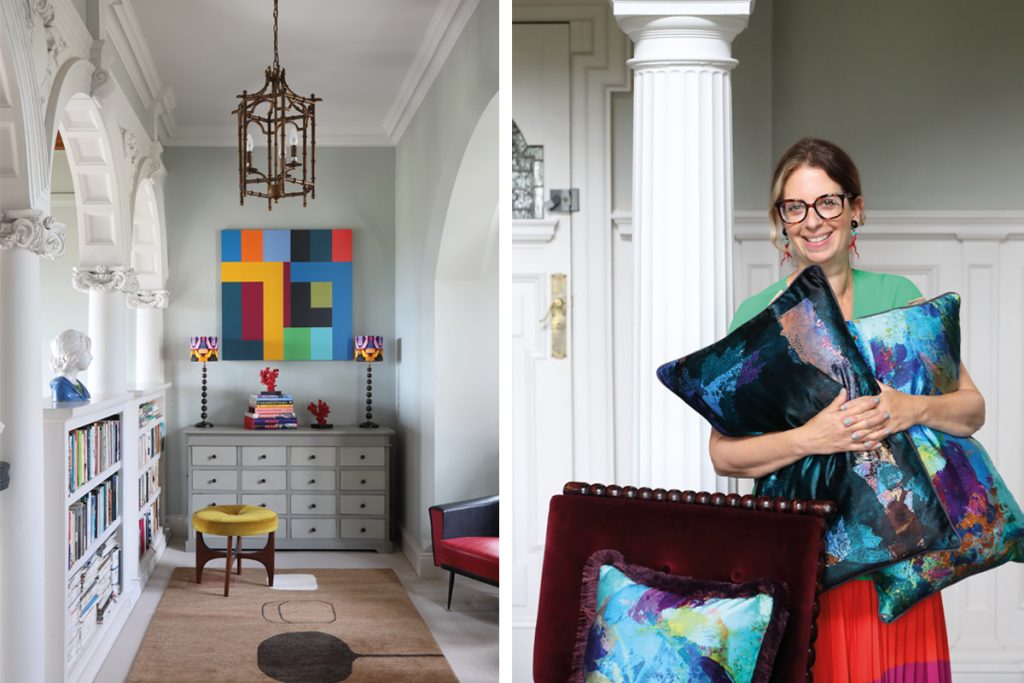 For an adventurer, Covid times have been hard times. Susi Bellamy’s career has relied on twists and turns, risks taken and journeys to new surroundings, all of which have fed her creativity, infiltrating her work, whether as a magazine editor in London, an artist in Florence or a textiles-maker in Northumberland. The route might not have been all mapped out in advance, but her willingness to take a chance has given her a lifetime of variety and experience that fizzes with joie de vivre. You just have to take one look at her home to see the pleasure life has brought her.

“I’ve always told stories,” she says. “When I was editing fashion and beauty, I’d always think in terms of stories, and this has followed in my work as an artist and maker.”

After an early career in London styling photoshoots for glamorous magazines, she moved to the USA when her husband’s job took the newlyweds to Delaware on the eastern seaboard. There, following the birth of their first child, she embarked on the adventure of life as a full-time parent navigating a new city on the other side of the world. “A baby is a great way to strike up a conversation and meet new people,” she says. “I made a lot of friends, and Delaware and nearby Philadelphia and Baltimore really opened my eyes to art.”
Bellamy acquainted herself with Philly’s Barnes Foundation (one of the world’s greatest collections of impressionist and post-impressionist painting) and the Baltimore Museum of Art and quickly enrolled in painting classes at the latter. “I haven’t stopped since,” she smiles.

The family returned to the UK after a couple of years and settled in Suffolk where Bellamy continued painting as two more children arrived. She began showing her work and even sold some pieces. Then a move to Newcastle prompted her to go back to university, taking a part-time degree in Fine Art.

It was a subsequent move that proved most significant, she believes. “My husband came home one day and asked how would I feel about moving to Florence… I just laughed and said ‘I’m there!’” she recalls. So, much to the horror of their three young children (who had placed ‘do not pack’ stickers on their foreheads in protest), they boxed up their lives and headed to Italy. “The children loved it. I immediately enrolled on an art history course taught by an American professor who’d take us on walking tours of Florence. She really opened my eyes to the Renaissance.” 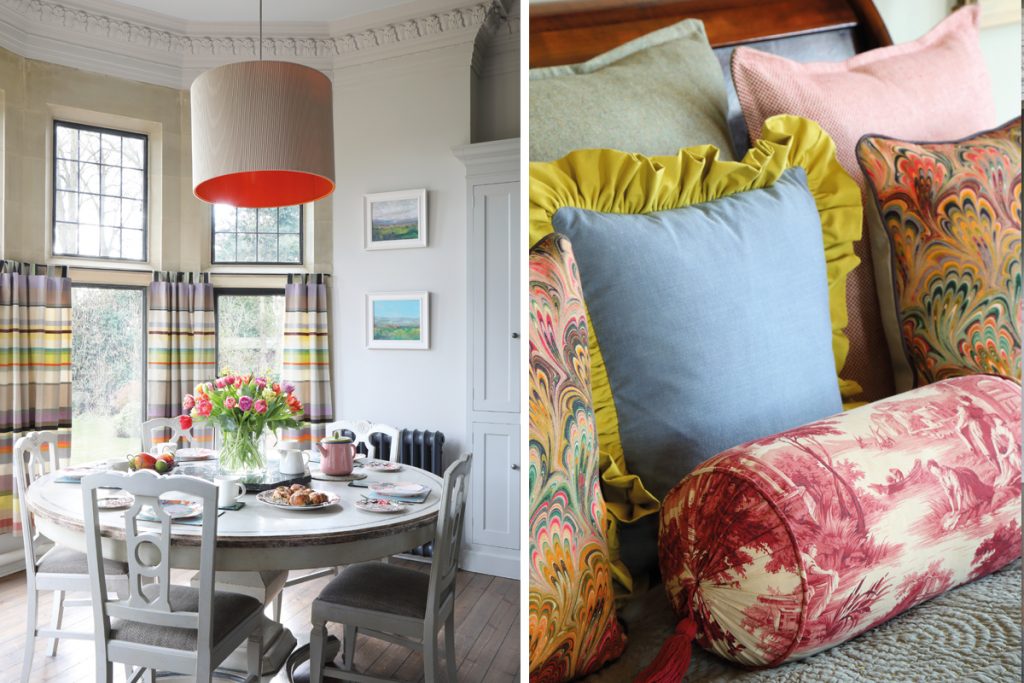 She took classes to learn the painting techniques of the Old Masters and for seven years immersed herself in the historic city and its crumbling palazzo walls. Then it was back to the UK, to the north of England this time, where her painting style – influenced by her Tuscan escapade – soon took on a new dimension. “I had a shelving system in my studio where I stored my pieces,” she explains. “One day when I saw some small abstract works drying there it occurred to me that they might work as designs for cushions.” A showcase at the Top Drawer design trade fair was the turning point: her work was immediately picked up by interiors brand Amara and the orders flooded in. Before long, her collections had also caught the attention of Heal’s and Liberty, where her label is now stocked, and she has built on her signature themes of bold abstraction and painterly textures, interweaving her artistic practice with crafts such as marbling. 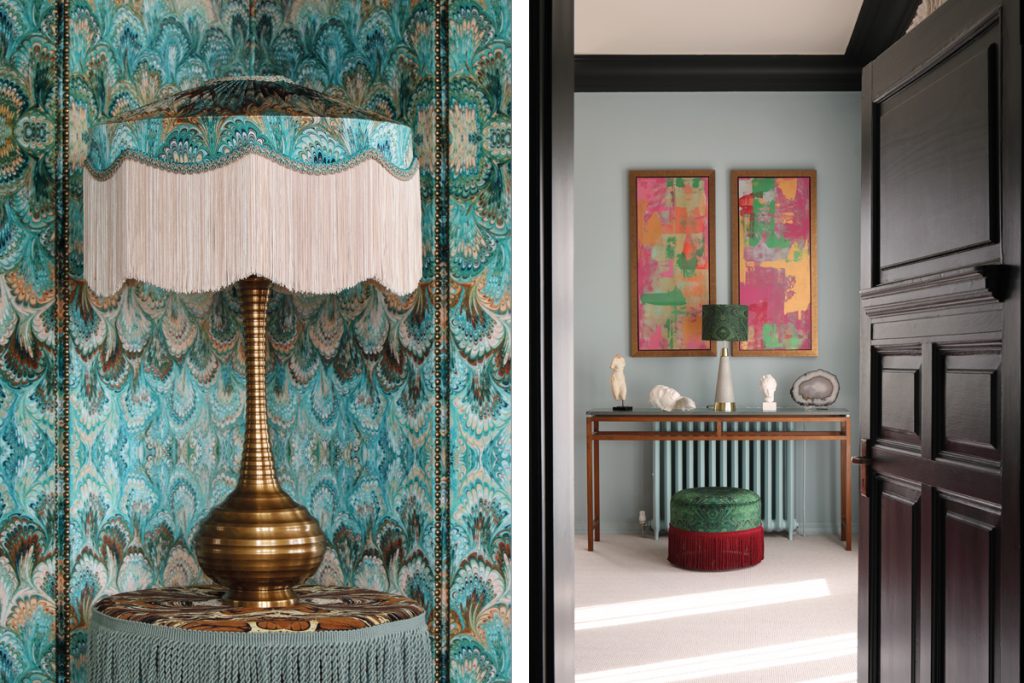 The family home, a conversion within an Edwardian villa, is a testament to her magpie eye for beautiful furniture gathered over a lifetime of travels and her keen sense of how to combine colour. Add in an impressive collection of original works by some of her favourite painters, and it’s clear this is a home full of its owner’s character. “It was the scale and the view that persuaded us to buy it,” says the artist. “It was all dark wood panelling when we moved in, so the first thing we did was lighten everything up. A lot of the furniture was trucked back from Florence, so the house really does channel the memory of our time in Italy.” 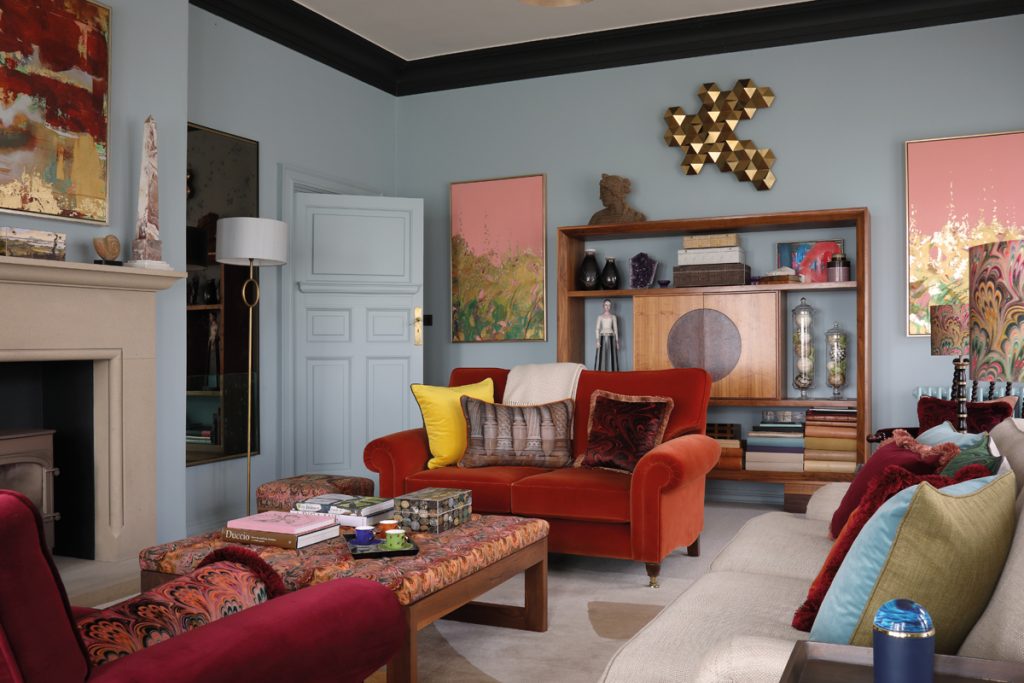 The melding of classical details on such a grand scale with contemporary styling in saturated hues packs a punch. Original features have prevailed, and Bellamy’s priority was always to give her home a sense of flow and light. Vaulted ceilings, quirky nooks, hallways and archways are given the same prominence as reception rooms and day-to-day necessities such as a well-functioning kitchen. This equality is what sets her style apart: no corner is unloved or overlooked. Perhaps this approach is a hangover from her days as a magazine editor, where every frame had to be scoured for clarity and perfection, regardless of the content; perhaps it’s her artist’s eye where committing marks to canvas forces the painter to think about how the work will be viewed. Either way, it has resulted in home that reaps the best from all of this adventurer’s lives, laying them all down in a coherent, truly individual space that celebrates wanderlust, creativity and risk-taking. “More than ever, our homes have become very impor­tant,” she says. “And it only takes small things to cheers us up. 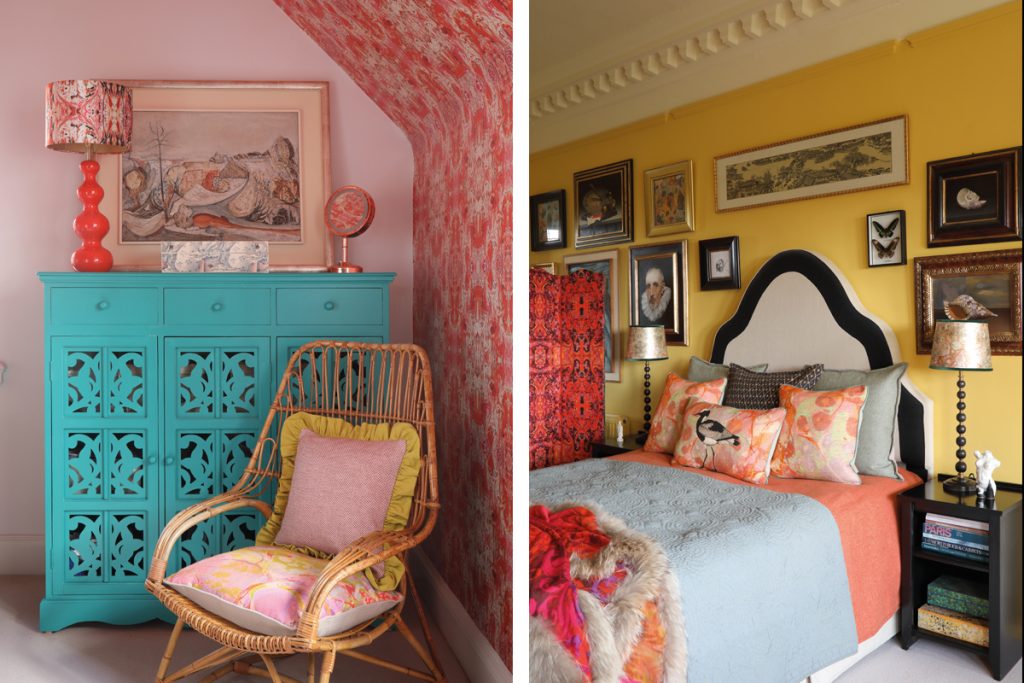