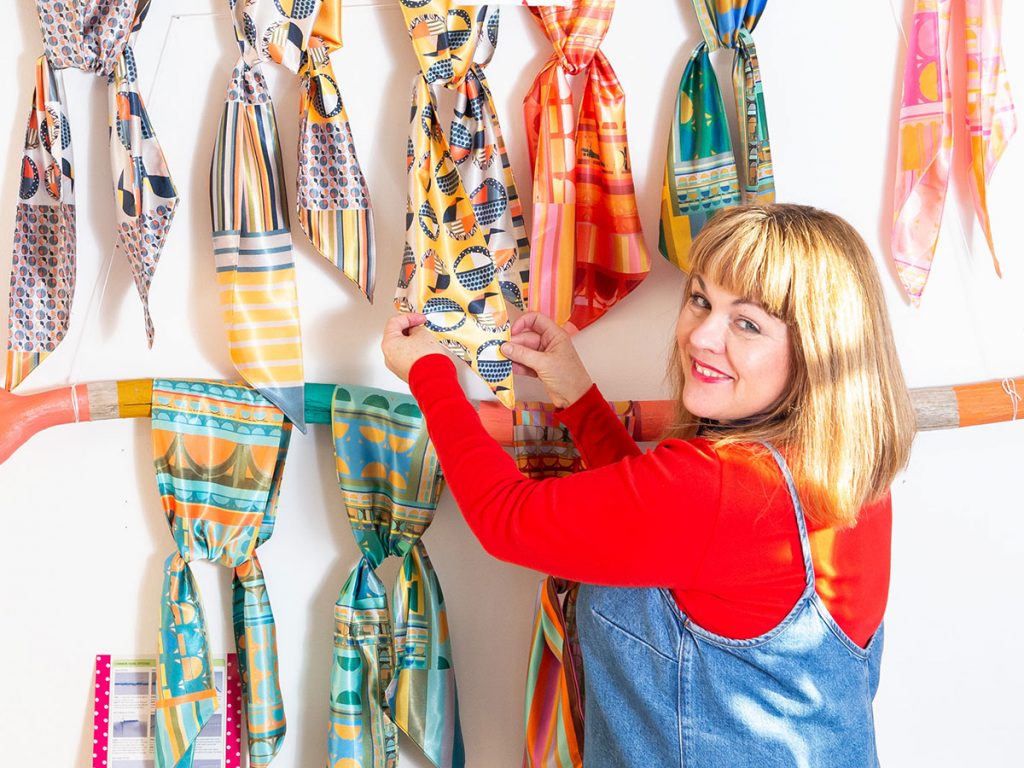 “I’d say my love of making things comes from my mum. She made our clothes and knitted our jumpers – for all six of us – and the clickety-click of knitting needles and the hum of her old Singer sewing machine was the soundtrack to my childhood.

Influenced by her, I went to Glasgow School of Art in the early 1990s, where I studied printed textiles and surface design. My first job out of school was as a window dresser for an independent retailer in Berkshire. It was fabulous. We were given free rein to do what we wanted with the windows, so we made all our own props and we soon started winning awards for our displays.

I managed to convince my boss that I needed to go to London to learn more about prop-making, which I did at the London School of Printing. A little while later, a music director noticed a window scheme I had created and offered me a role designing an opera in Bristol. 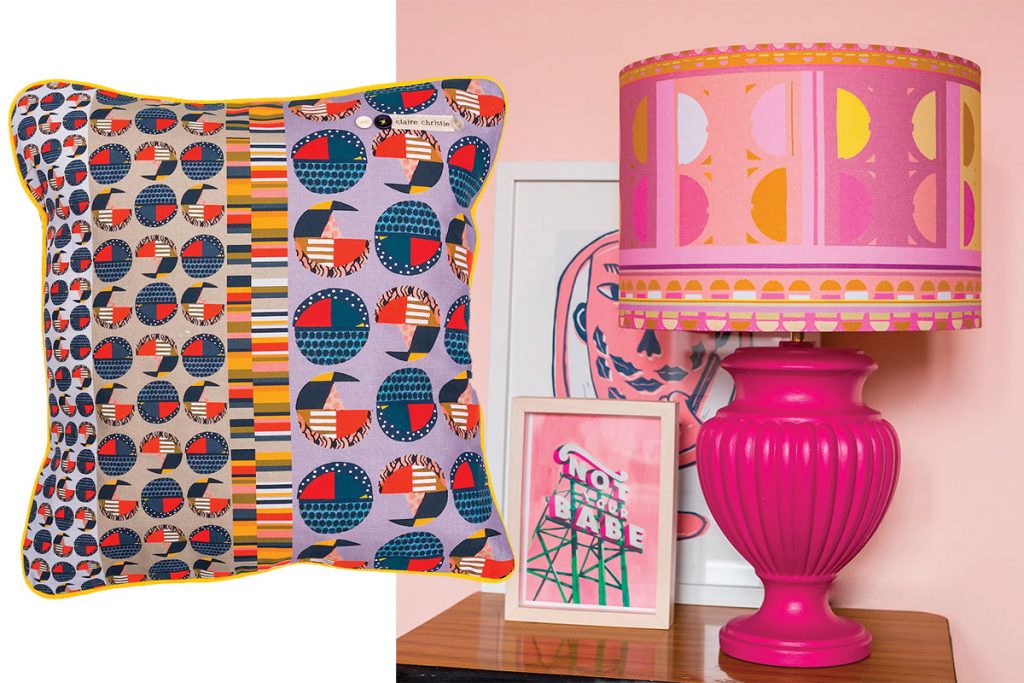 One of the designer’s Motion Dot cushions; This lampshade was inspired by the Georgian façade of a Dunfermline pharmacy

The job meant building sets and props and making costumes for a cast of 50 for a production of A Midsummer Night’s Dream. I jumped at the chance. The performance was put on in an old tobacco factory and I slept there at night to get everything done in time. I stayed in Bristol for a while, but once my children came along we moved back to Scotland.

I decided to take a career break but immediately got restless, so on a ropey old sewing machine I started turning vintage fabrics (which I’d been collecting since my days at art school) into accessories for my new home. My friends would come over, admire my creations and place orders for their own homes.

As the orders poured in, I taught myself to make all sorts of home accessories, all with a strong focus on reuse and upcycling. The business grew and I realised I needed more room to play with, so in 2015 I moved into a studio in an old fire station in Dunfermline. My Clarabella Christie product range now includes homewares, furniture and lighting. I love to share my knowledge too – I’ve worked as a sewing tutor with charities with a similar ‘trash to treasure’ ethos and I host weekly sewing classes from my studio. 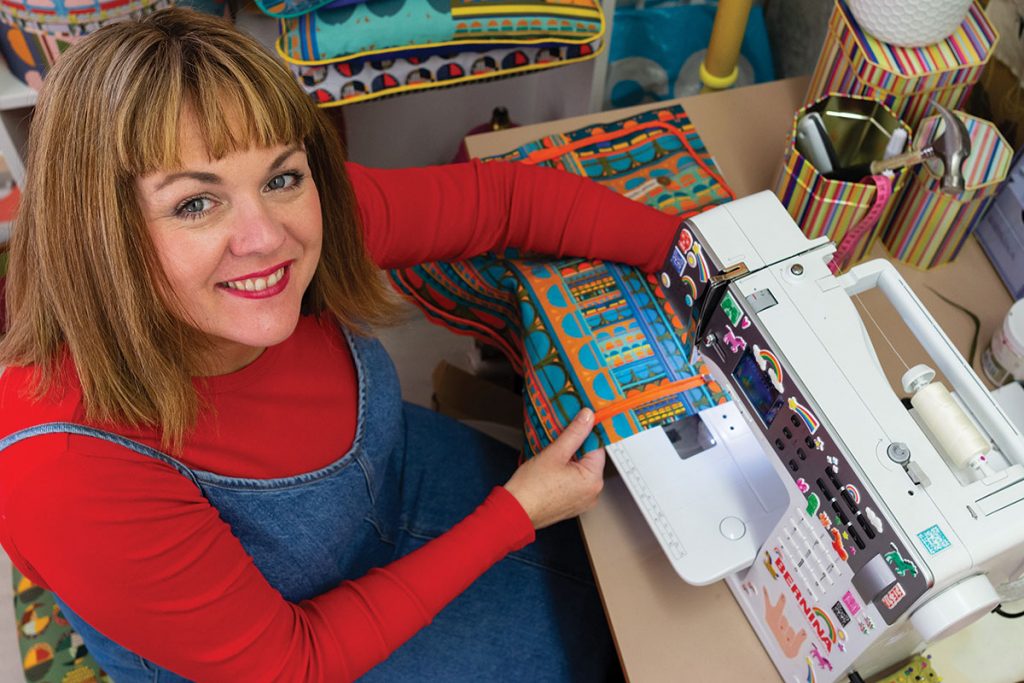 Claire Christie in her studio at Dunfermline’s Fire Station Creative

When it became harder to source vintage fabrics, it made sense for me to start printing my own, so in 2015 I went back to school to study digital design. My new collection, Hometown, is the outcome of this. I showcased it at the gallery in Fire Station Creative in an exhibition called Look Up, which took the form of room sets.

My studio looks out over the rooftops of Dunfermline and it’s this skyline that has inspired my first collection of prints. I photograph and lino-print images of the skyline and then manipulate them digitally to create interesting patterns. I use appliqué, machine embroidery and freeform patchwork to turn these prints into one-off pieces. It feels like I’ve gone full circle to my days at art school.” 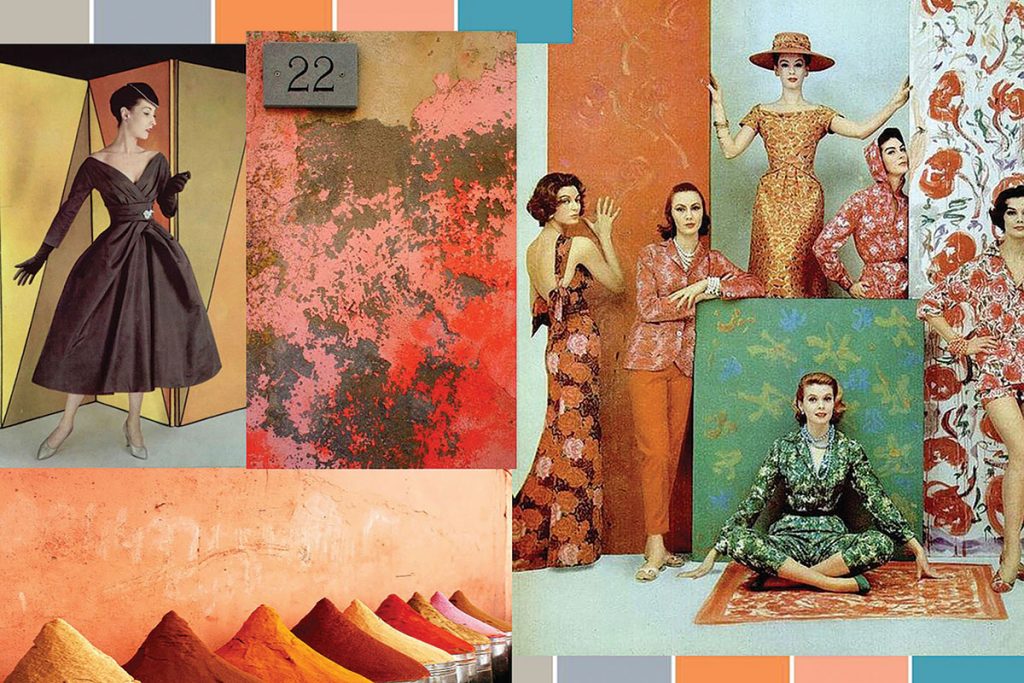 A moodboard from the designer’s Hometown collection, with colours inspired by her love of vintage fashion photography