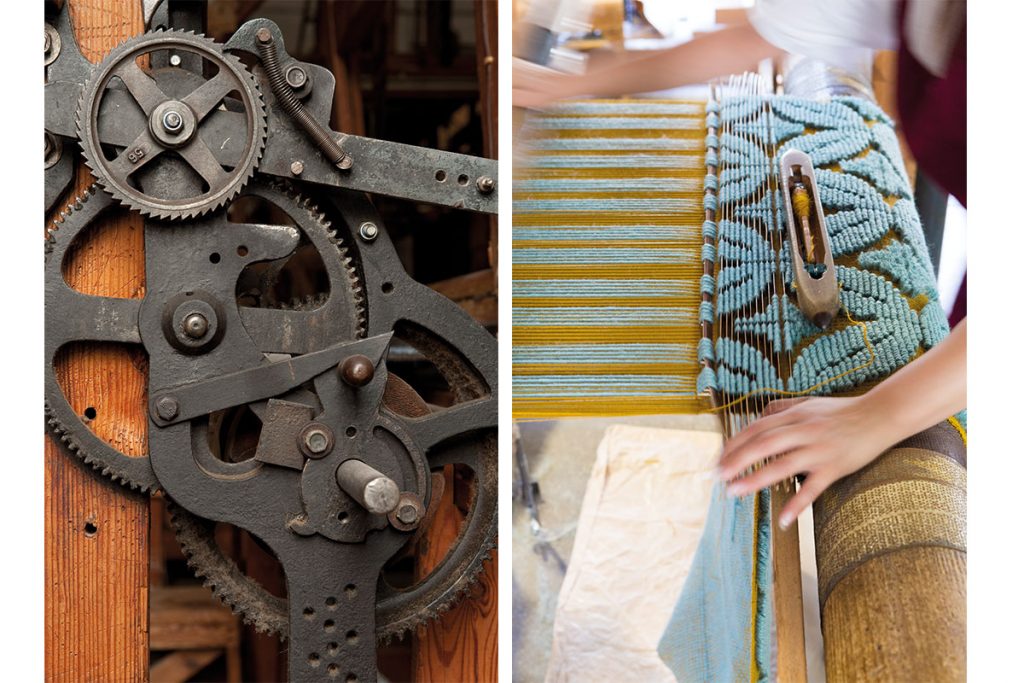 From left: The gears on one of the workshop’s original Jacquard looms; Hand-weaving a Jacquard rug

When French rug maker La Manufacture Cogolin was bought over by carpet specialists the Tai Ping Group in 2010, the luxury textiles maker had lain dormant for decades. Its workshops were still intact but they were deserted and dusty, a far cry from the busy studios where lavish bespoke commissions had once been designed, woven and sent out to clients all over the world.

Rejuvenating this heritage brand has preserved its weaving tradition, and today it is one of the last few ateliers in Europe entirely dedicated to hand-weaving. Earlier this year, it launched its Jazz Age collection, celebrating the era of the workshop’s foundation.

Yet the company can trace its roots back much further than the 1920s. The Lauer family were the progressive artisans behind La Manufacture Cogolin, focusing on a specialist craft that set the textiles company apart. But in 1850, Jean Lauer’s grandfather, Jean-Philippe, had established a firm in Paris to produce woven and printed fabrics, tapestries and hand-knotted rugs. These were regularly commissioned by royal families and international embassies and the studio was able to open a showroom and promote its designs to new clients at global trade exhibitions. By 1910, the workshop was relocated to Aubusson in a bid to secure more specialist artisans. “Following the First World War, grandson Jean, a graduate of the École de Tissage de Lyon, initially worked under his father Maurice, before taking over the family business,” explains managing director Sarah Henry, who has continued to uncover and archive the history of this artisan family. “When Lauer took over the workshop in 1928, the ateliers were producing Oriental rugs. He retrained the staff in the traditional French Savonnerie technique of weaving high-pile hand-knotted rugs in wool.” 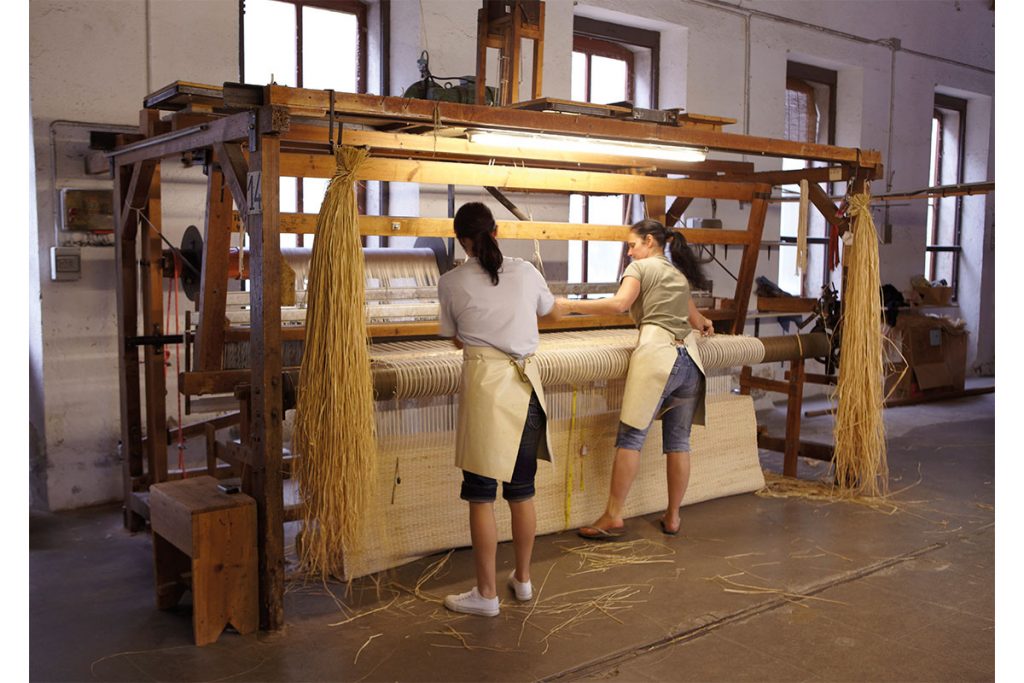 In its heyday La Manufacture Cogolin had an all-female workforce. Its essence and savoir-faire have been recaptured and passed on the new generation of weavers

He also introduced time-honoured Mediterranean weaving techniques found in the ancestral Maures rugs that had been made in the region for centuries, allowing his workforce to stand out against competitors. “We still weave in the same way we always have; for certain techniques since the 1960s, and for others, since the 1930s, when the looms were installed in our workshop,” says Henry. “We use a traditional Jacquard hand-weaving technique that has not changed since the mid-19th century when the Jacquard mechanism was invented.”

International expositions like the 1925 World’s Fair in Paris helped to establish La Manufacture Cogolin as a leader in its field. The company’s association with Modernist designers, architects and artists – the likes of Christian Bérard, Eileen Gray and Sonia Delaunay, all of whom commissioned textiles from the workshop – reinforced its reputation as a maker of high-quality, beautifully conceived pieces.

By the 1960s, Jean’s wife Irma helped to continue that trajectory; she took on the role of head of the design studio where she recognised that by adapting the fabric looms with Jacquard mechanisms to weave rugs, previously made stitch-by-stitch, they could increase production. 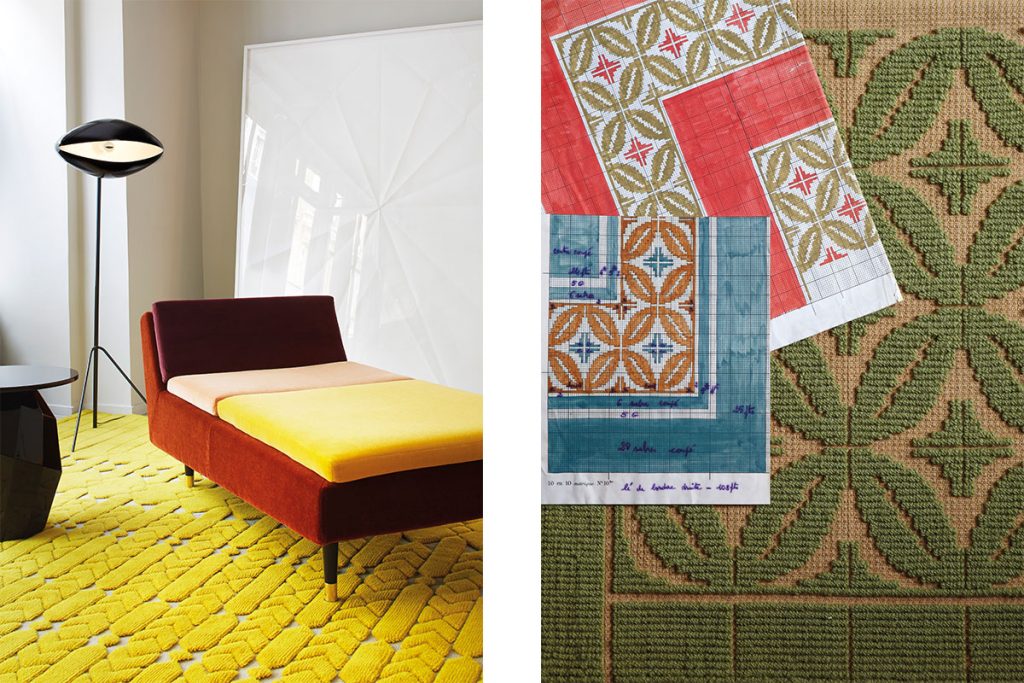 From left: A rug from the Jardin Interieur collection, a collaboration with Iranian-French architect India Mahdavi; The ‘Verne’ pattern as a diagram from the archives and the finished product

Following the Tai Ping takeover, the workshops were completely overhauled in 2014, with everything from the wiring to the roof renewed. There are now 20 employees and each new member of staff is trained on-site. “It takes about five years before a weaver becomes fully independent on the most complex looms, and years before they can weave up to three metres a day on our 70cm-wide looms,” Henry points out.

“Around a quarter of employees work in the prepara­tion of yarns, maintenance of the looms and management of the team, half are in weaving and a quarter are in the sewing and finishing team.”

The majority of the brand’s work now is residential; clients opt for patterns, colours and sizes that are then worked up into renderings that give a visual representation of what the rug might look like. Once the client has approved the design, yarns are dyed to order. “Most of our rugs are woven in 70cm-wide panels; these are then sewn together to assemble the rug. The production process typically takes about ten weeks, although it can be double that for a very large rug.

“I think interest in artisanal craft techniques is growing – luxury isn’t necessarily about what you can spend but about having a unique and interesting piece that your neighbour doesn’t have,” she adds. “I also think people are becoming more conscious of the dark side of low-cost production in south-east Asia or India – and the environmental problems caused by a throw-away culture of inexpensive goods.”