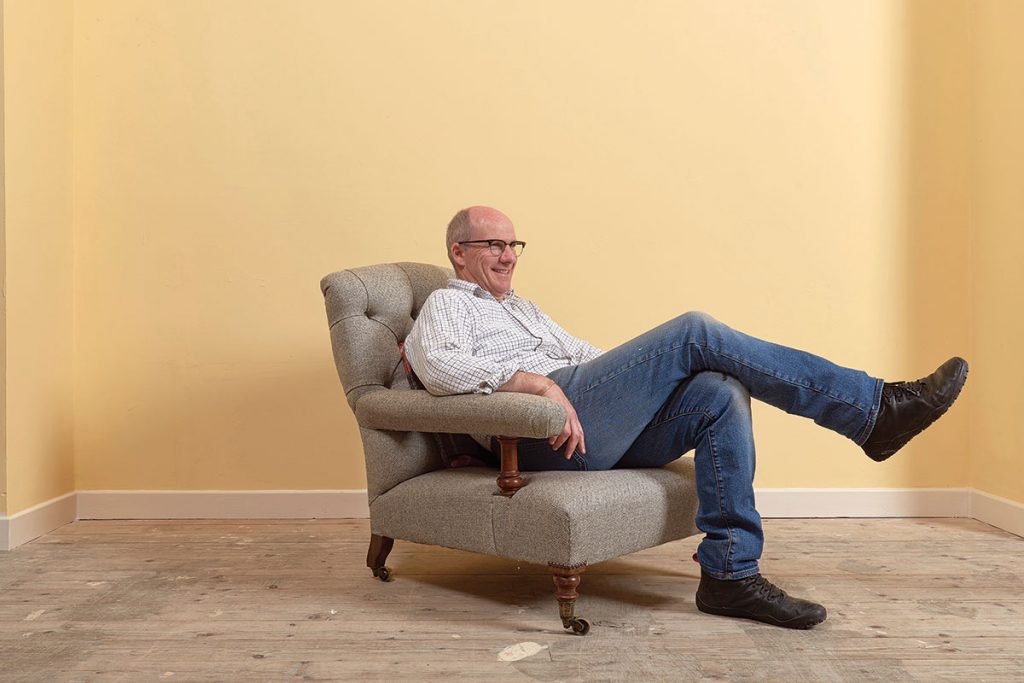 Pryke relaxes in one of his restored armchairs, a low walnut-framed Victorian chair on original brass castors, reupholstered in tweed from Isle of Mull Weavers

On paper, Sebastian Pryke is a formidable powerhouse of academia, with more letters after his name than seems feasible. Meet him in person, though, and it’s his gentle energy that strikes you first. He is soft-spoken and approachable, eager to share his passion for Scottish antiques.

His long career has always had a focus on the treasures to be found in Scotland’s historic houses, from his PhD thesis on the 18th-century Edinburgh furniture trade (“I only ever call myself Dr if I’m lecturing or involved in an academic context,” he smiles), to his years as head of furniture at Lyon & Turnbull, and his work in the fine-art insurance sector.

Three years ago, he set up At the Sign of the Pelican, to allow him to explore other strands of his love for antiques. He wanted the business to be a safe haven not only for his carefully sourced furniture but also for others interested in Scottish antiques. It’s based in the former YMCA in the Fife village of Cupar. “The catalyst was really the building itself,” says Pryke. 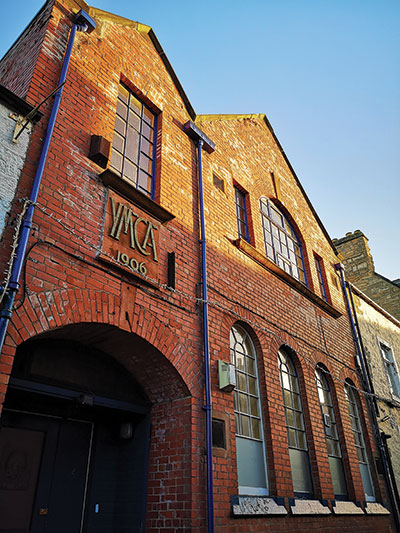 “I bought it because it was unique, rather beautiful in its own way, and it seemed like a good restoration project. Now, one new roof and extensive dry-rot repairs later, I’m not so sure just how good an investment it has been, but I still love it.”

He brought in roofers from Dundee and the Preservation Company of Fife to treat the dry rot and then he and his family did much of the rest of the renovation work themselves.

He has ended up with a big airy space, with plenty of room to display Georgian chairs, Regency tables and beautifully crafted heirlooms from the past.

“The previous owners had installed a partial mezzanine floor in the gym, which makes a great office area,” he adds.

And there is a top floor that is currently being renovated – necessary extra space for his growing collection.

The curious name of the business, At the Sign of the Pelican, has its roots in the Scottish furniture trade. Young & Trotter was Edinburgh’s largest upholstery and cabinetmaking firm in the mid-18th century.

“The firm’s address was At the Sign of the Pelican in the Luckenbooths, by St Giles Cathedral in the High Street,” says Pryke. “Outside was a sign with a pelican painted on it – like my logo. I’d always thought it would be a lovely name.”

Pelican, as it its lovingly called for short, is much more than just a shop. The showroom is one of a very select few places in Scotland where you can go and be surrounded exclusively by antique Scottish furniture.

“My parameters are that pieces have to be made in Scotland or have a provenance that connects them to Scottish houses; added to this, I like it when materials are local (I’m particularly keen on laburnum furniture) and have a distinctive Scottish form.” 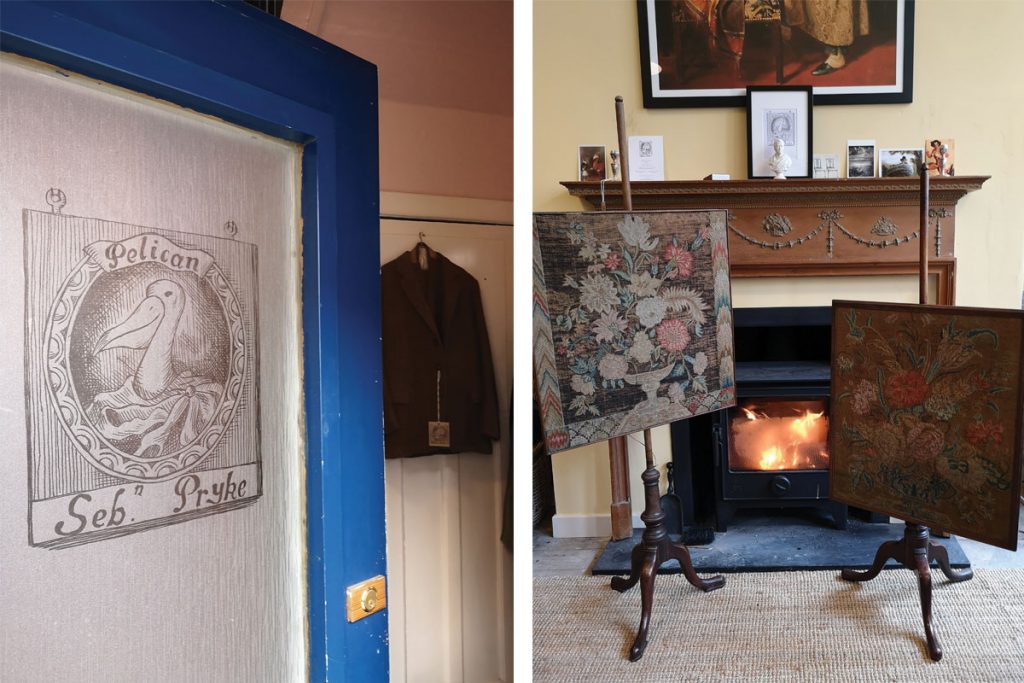 From left: Pryke’s daughter, Daisy, created the logo by reimagining the 18th Century billhead of Francis Brodie, a cabinet maker and father of the notorious Deacon Brodie; Two needlework panels from the 1760s await buyers on the cosy shop floor

Pryke’s background and knowledge of Scottish historic houses give the business its unique character. “I have spent my entire working life visiting and often working in the country houses of Scotland, so I have a deep understanding of how they were furnished and decorated,” he explains.

Pelican is also home to the complete linen range of Inchyra Designs, and is the only place in Scotland where you can actually see and touch the beautiful fabrics created by Caroline Inchyra in nearby Perthshire. Pryke enjoys sharing his love of antiques with anyone who’s willing to learn. “I like having groups come to the showroom so I can enthuse other people,” he smiles. “I’ve lectured and published articles about Scottish furniture extensively in the past and it’s something I try to do whenever the opportunity presents itself.”

He also rejuvenates battered antiques and sources furniture for interior designers and business owners. His most recent project was for the Kinneuchar Inn in Fife, which had just been restored after many years of being closed. “The owners wanted furniture that would be beautiful, practical, traditional and appropriate for a historic inn in a Fife village,” says Pryke, who was more than happy to oblige.

“Sourcing thirty chairs for the private dining area was a particular challenge, but the harlequin set of Scotch chairs (mostly made in Dundee) that we put together, stripped, restored and upholstered with local deerskin, has worked out brilliantly.” 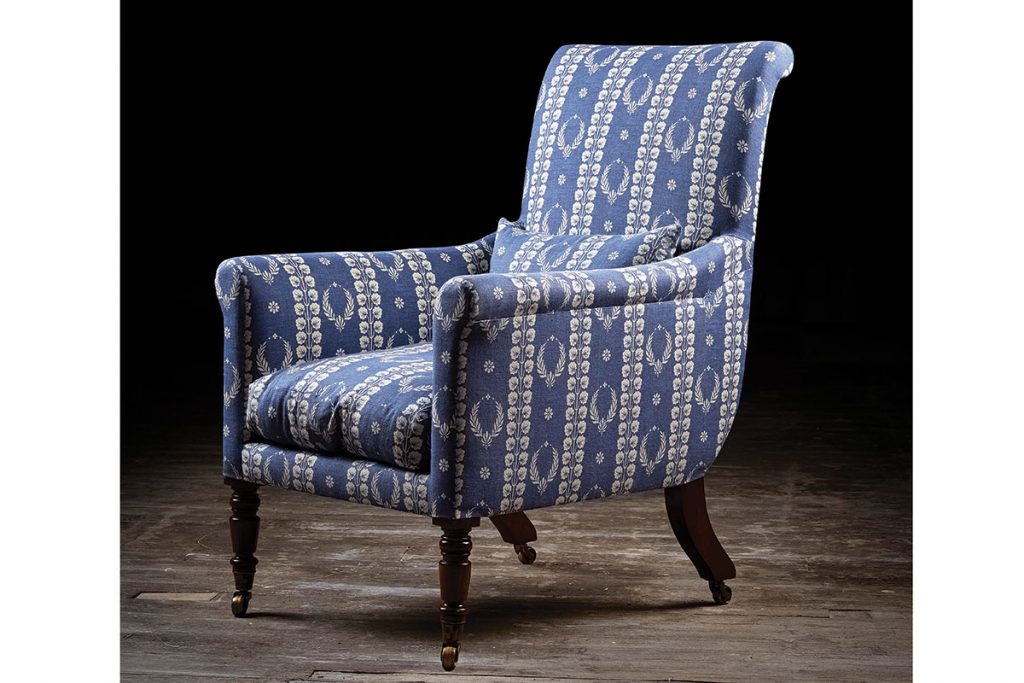 When he’s not steeped in antiques, Pryke indulges his other passion: swimming. “I love outdoor pools – there are some good 1930s lidos in Hertfordshire, where much of my family lives. There’s also a brilliantly unlikely council-run pool in the heart of central London at the top of Drury Lane, surrounded by council flats. It’s heated and open all year so you can swim even if it’s snowing – which I have done,” he says. “But swimming in the sea is what I love most. I don’t wear a wetsuit as for me it’s all about the feel of the water. I swam right through winter last year.”

With his business, family, lectures and swimming, it’s a wonder Pryke ever has time to take a breath. But, seemingly, it’s all worth it. He loves the history of Scottish furniture, something which is abundantly clear after any time at all spent in his company, and he has a genuine and unique outlook on the business of design and restoration.

He hopes to continue onwards and upwards, dragging Scottish antiques into the forefront of 21st-century design with his interiors collaborations. And if anyone can merge the antique with our modern world, you wouldn’t bet against it being Sebastian Pryke. 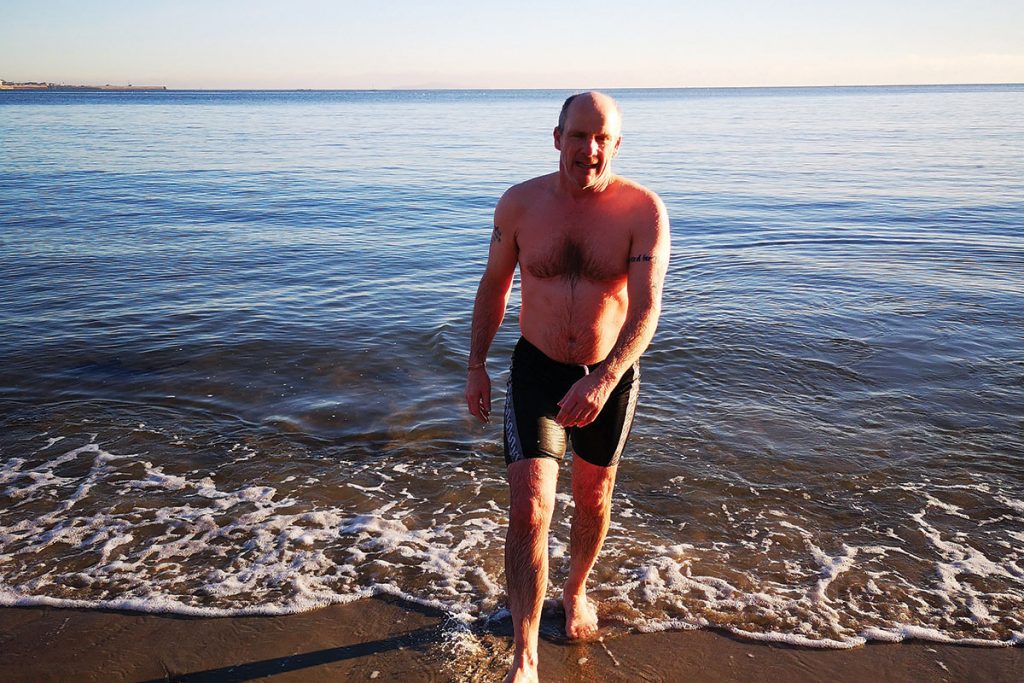 Pryke emerging from the Firth of Forth at Aberdour beach. Pryke loves wild swimming, taking to the seas in all seasons