It might be plain and modest, but everything about this award-winning house on Skye is rooted in warmth, comfort and beauty

Creating a building with “no outward signs of architecture” sounds like an odd ambition for an architect to have. But that’s exactly what Mary Arnold-Forster aimed to do with her design for the Black Shed on Skye. “It’s a house you can drive past without knowing any architect has been there,” she says. “There is no bling, no ostentation, just a calm and quiet presence.”

This modest take on the traditional Highland blackhouse is also, quite literally, a ‘black house’. Its roof and its cladding is black aluminium sheeting, in reference to corrugated farm buildings. Apart from a few grey tiles in the shower room, it has essentially just two other materials: the interiors are lined entirely in Douglas fir and there is a grey resin floor throughout. 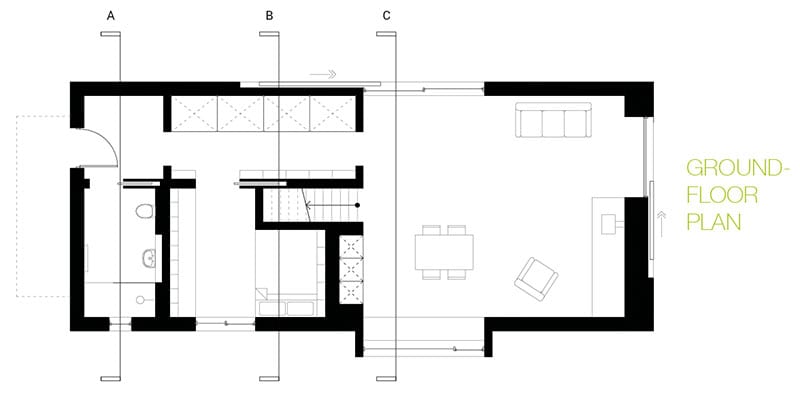 The project began around three years ago when the owners, Helena Webster and Judith Rosen-Berry, decided to relocate from their ‘two up, two down’ period house in Oxford. Webster, an academic and former university manager, and Rosen-Berry, a rabbi, had spent recent holidays on Skye, and were keen to immerse themselves in the island’s close-knit community.

Webster, herself a trained architect, had written a paper on modern vernacular architecture of the north-west of Scotland. This led the couple to Mary Arnold-Forster, a specialist in the field, who at the time was working for the Skye firm Dualchas and who has since established her own practice in Dunkeld.

Having found and secured a plot of about a third of an acre in a linear crofting township to the south of the island, the couple discussed their ideas with Arnold-Forster. “We were keen to explore the idea of a single-volume house designed around our way of life,” recalls Webster. “We were also looking for something other than white plasterboard for the interior, so we discussed timber wall linings, inspired by houses we’d seen in Switzerland.”

Central to the design – and in contrast to the guiding principle of so many new contemporary rural houses – the Black Shed is not ‘all about the views’. “Traditionally, houses in this part of the world were not built to exploit the views,” explains Arnold-Forster.

“People worked out-doors and their homes were there for shelter against the wind and rain. The Black Shed is not flooded with daylight, but there are a few carefully chosen windows so the passage of the sun can be traced throughout the day.”

This matches the experience of the owners, who can be found working outdoors when the weather allows it and then retreating into the warmth of the Douglas fir-lined house when the weather turns.

The simple form and predominantly single-volume arrangement appealed to the planning department; just one concern was raised, namely the fire rating of the internal timber panels. Following some experimentation on sample panels, an effective water-based retardant was found that also created the desired finish.

The nine-month construction programme was also largely straightforward, apart from one snag – an unusual sinkhole was discovered in the ground. This meant that the house had to be quickly redesigned to sit on a raft rather than a strip foundation. It resulted in a six-week delay and forced to the couple to rent a holiday cottage on the island. Webster saw the positives, though, admitting that she welcomed the opportunity to witness the final stages of the build project.

The house is entered on the east elevation. Leading you in is a corridor which is lined on one side with bookcases and on the other with cupboards; it’s quite low and dark, which accentuates the drama of emerging into the large main space. The double-height kitchen, dining and living room has carefully positioned windows, including a south-facing sliding door with an external seating area. A large fixed pane is set into the west gable and there’s a horizontal window to the north.

The ground-floor bedroom (now used primarily as a study) has an en-suite shower room so that any guests staying over will have their own self-contained area. Directly above the study and shower room is a master en-suite bedroom with an east-facing view towards the towering peak of Ben Sgritheall on the mainland.

“The house may look a bit austere from the outside but when you come from the black cladding into the warm, timber-lined interior, it’s quite a ‘wow’ moment,” says Webster. “The inside appeals to all the senses, with the tactile timber giving off a lovely cedar-like odour, and the light creating a warm, modulated effect. It also works really well on a practical level – it’s very low maintenance.”

Tracking the sunlight is a particular pleasure for the owners. “The light is always changing,” explains Webster. “In the morning, the sun comes in through the front door and down the passageway to the main living space. In the evening, it hits the gable window to the west. So you get very different light and lots of rainbow colours refracted through the glass onto the timber. We enjoy the effect so much that we don’t have any pictures on the wall.”

The couple researched and sourced the resin floors. “The resin is lovely,” says Arnold-Forster. “It’s warmer than timber, and because the walls are so rich and the floors are completely plain, it creates a perfect contrast.”

A new building housing a garage, log store and studio lies along the road perpendicular to the house. Together, the two buildings protect the entrance space with its raised beds and a larger meadow garden planted by the owners. “The landscaping has been designed to bring the crofting meadowland up to the house, rather than the usual approach of laying lawns and flowerbeds,” says Webster.

“Croft houses traditionally had no gardens – it was just land planted with vegetables with cattle grazing beyond. Our meadow grass and raised beds are a homage to this tradition. The packing timber that came with the wood has also been used to make the raised beds and composting area.” An old ruin was cleared from the site, its stone incorporated into the garden to form retaining and boundary walls.

Webster and Rosen-Berry moved into the Black Shed more than a year ago and agree that their modest new home perfectly facilitates their new life in the local community. “Judith writes a lot and I’m getting back to being creative again,” says Webster, who made the couple’s outdoor furniture in her workshop. She is also working with local craftsman Stuart Shone to make some pieces inspired by traditional Highland blackhouse furniture.

“The Black Shed is a very modest house, and I believe that modesty is coming back, at least in terms of design,” concludes Arnold-Forster. “Why have an enormous house when you can have a house that’s the right size, with a high level of quality and craftsmanship?”