A former observatory on Edinburgh’s Calton Hill is the new home of Collective, the contemporary visual arts organisation

People buy souvenirs in the hope of capturing the essence of a time and place. In a city like Edinburgh, however, the average tourist memento is a piece of ephemeral tat. Now, though, a new design project, Collective Matter x Panel, is aiming to provide an alternative.

In collaboration with curators Panel, contemporary visual arts organisation Collective is marking the launch of its new home on Calton Hill with a range of artist-designed limited-edition products that celebrate local manufacturing. Forming the basis of a new exhibition in the capital this winter, it’s a more personal approach to the gallery shop retail experience, and it uses this landmark location in the centre of Edinburgh to offer new ways through which to remember the past.

“Objects such as souvenirs carry the stories that make up our history,” believe Panel curators Lucy McEachan and Catriona Duffy. “Through the monuments of Calton Hill, we have considered how these stories are transferred to architecture to define a certain kind of civic identity.” Those buildings include the Nelson Monument, the City Observatory and the unfinished homage to the Parthenon, the National Monument.

Five invited artists – Mick Peter, Rachel Adams, Katy West, Alan Dimmick and Katie Schwab – have created items inspired by the hill, made in small batches rather than mass-produced, in a bid to offer a more meaningful example of a tourist’s souvenir. There’s a photo mobile of the monuments; a necklace in three linking pieces representing stars in a constellation; a scarf inspired by the role of women in astronomy; a set of porcelain jars that reference the history of the Leith docks (ships in the Forth were reliant on the time signal from the Nelson Monument); and a rain poncho inspired by the pioneering city photographer Thomas Begbie. “By inviting artists to engage with our locality,” says Collective’s director Kate Gray, “we believe we can show that souvenirs can connect meaningfully to place, memory and material culture. We wanted to offer a different take on the typical Edinburgh souvenir by thinking about the many ways that Calton Hill was and is inhabited.”

Duffy and McEachan agree that by offering artist-led products for sale, a new attitude can be fostered. “Though widely valued as personal mementos, souvenirs can also be dismissed as surface design kitsch and, through their production, misunderstood as cheaply made and disingenuous. By drawing attention to ethical and local production, we hope to create projects that frame design and craft not as the resource base for segregated services or goods, but as an integral part of our broader social, political and cultural landscape.” 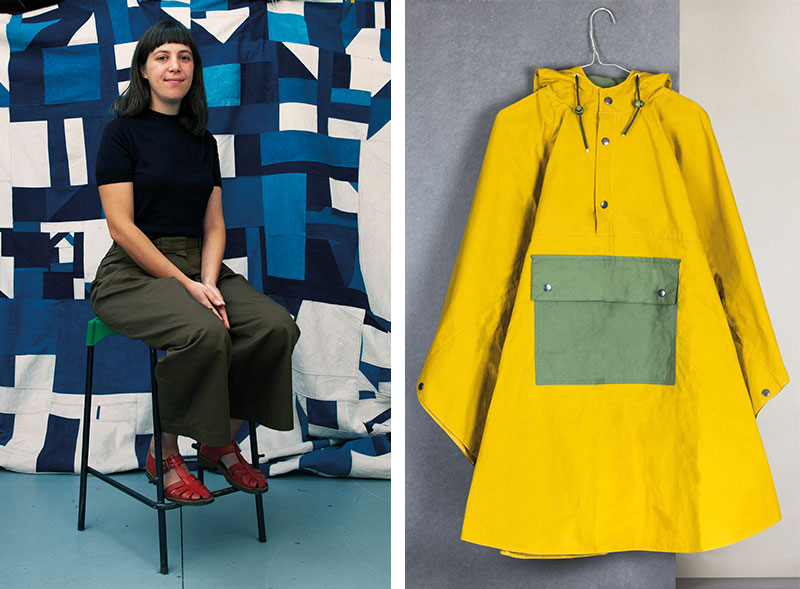 Katie Schwab makes art rooted in craft-based histories. Her rain poncho cape, made in collaboration with Halley Stevensons and Greenhill Clothing, can be used either as a garment or as a groundsheet. “Much of my work is connected to ideas around craft and manufacturing,” she says, “so I was excited to explore these in relation to histories of Scottish textiles. The poncho is the first garment I’ve ever produced.”

Mick Peter lives and works in Glasgow. His Stargazers Scarf, produced with Alex Begg & Co, is inspired by the people who worked at the observatory on Calton Hill. “When the observatory was in use, the people working there collected editorial cartoons relating to astronomy. I used those as a springboard to design the scarf,” he explains. Women working in astronomy at that time were largely confined to data-processing, so Peter wanted his design to represent their legacy and unsung contribution. 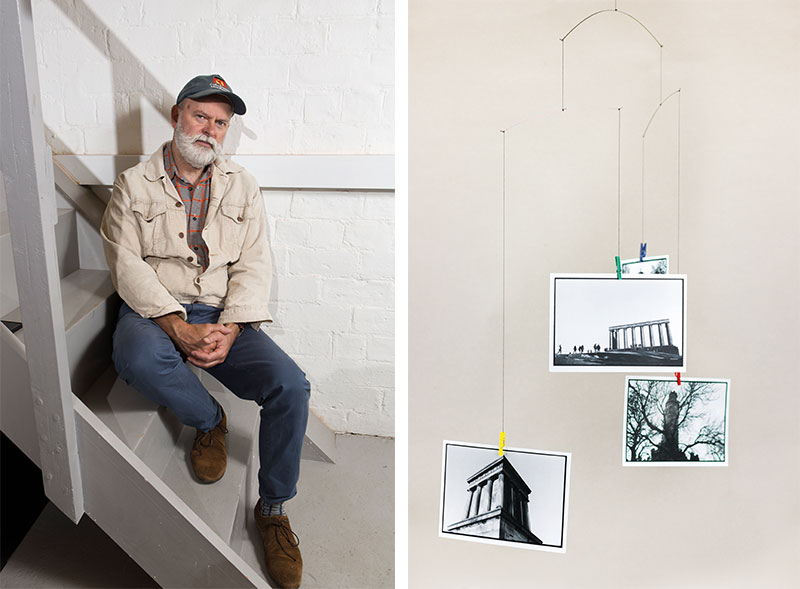 Alan Dimmick is a Glasgow-based photographer who documents the contemporary Scottish art scene in black and white. Working in collaboration with Flensted Mobiles, he made a series of eight depictions of Calton Hill, showing the site’s Enlightenment period monuments and buildings. “I tend to take photographs so I can remember a place,” he says.

Katy West is a ceramics artist who lives and works in Glasgow. Her creation, Fair Play, is a set of six porcelain jars, each labelled with key historic Scottish trades. “The connection that Calton Hill has with Leith made me think of how bustling the port must have been a few centuries ago,” she says. “I’ve always loved storage jars so it seemed an obvious decision to try to illustrate the import-export trade through canisters that people would still find useful today.” 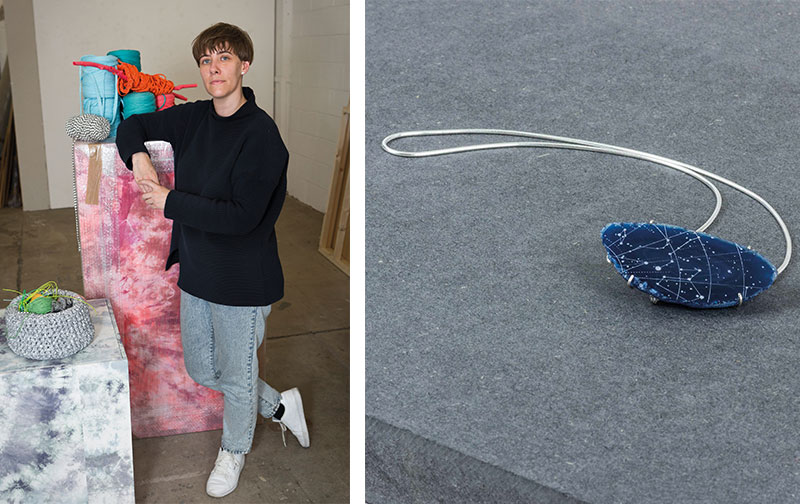 Rachel Adams is a visual artist living and working in Glasgow. Collaborating with jeweller Elizabeth Jane Campbell, she has created the Constellations necklace, using traditional and digital techniques and drawing on Calton Hill’s history of astronomy. “I have a silver ring that my dad bought my mum in the 1970s,” she says. “That’s why I wanted to make a piece of jewellery; it can take you back in time or to a different place. It can allow the wearer a bit of memory time travel.”