Taking its cue – and hue – directly from the Angus landscape, Zinc House fits perfectly into its surroundings. In fact, it has an almost chameleon-like presence on the brow of the hill on which it sits, overlooking the rolling hills towards St Andrews and the sea beyond. On a cloudy day it appears as a battleship grey, yet against blue skies it seems almost green in colour. And on a rainy day the house and its surrounding sandstone courtyard walls gradually turn the same colour.

None of this happened by chance, as architect Graeme Hutton explains: “The stone in the area has this lovely mossy-green tone. We liked it so much we originally thought of using it to clad the house, topped with a zinc roof. But the more we experimented with the local sandstone the more we realised that it had limitations as a building material. The site is very exposed and the sandstone would have quickly eroded in the wind and frost.

“But one day when I was thinking about the project, I had an idea. I texted the clients, saying, ‘Let’s do the whole thing in zinc, with just the boundary walls and courtyard in sandstone.’ They gave the go-ahead right away,” he says. 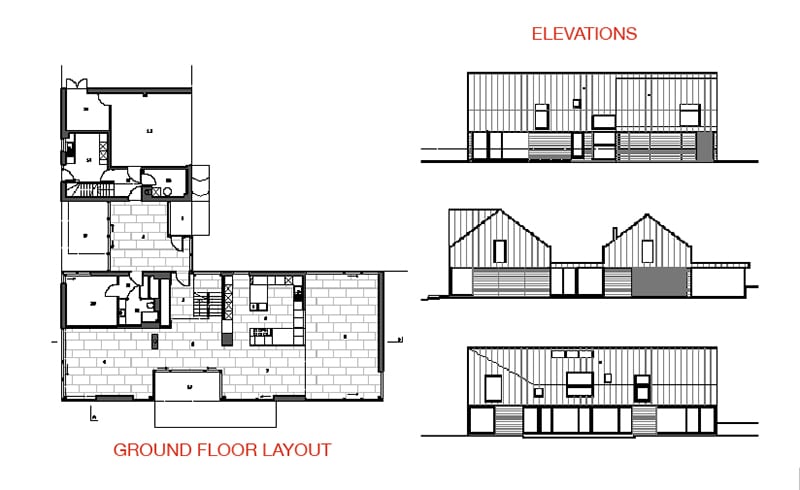 “The greeny-grey chlorite in the local stone is what informed the decision to clad the building in a single skin of zinc. When we first put the zinc sample next to the wet stone on site, the colour matched. It was a eureka moment!”

The appropriately named Zinc House also looks to the Angus landscape in terms of its form, echoing the agricultural sheds that had previously stood on the site, which owners Richard and Jackie Callison purchased in 2005 along with the neighbouring farmhouse and land. The couple, who had lived in a converted cottage adjacent to the farm for almost 30 years, knew those sheds had views to die for.

“The farmhouse and sheds sat on the brow of the hill and had a lovely aspect so I’d always had my eye on them. And when the farmer put the plot up for sale we went for it,” explains Richard. “At the time we bought it, though, the local authority wouldn’t allow any new building where the sheds were located. Fortunately, this changed around 2010 when building on brownfield sites was permitted, and disused farm buildings fell into this category. This paved the way for us to think about building a new house, as we knew we could finally apply for planning permission.”

The couple initially thought about building a German kit house on the site. But when they came across Drummond Shed, a zinc-clad family house not too far away in rural Perthshire, also designed by Hutton, they decided to contact the architect directly.

“During our first meetings we spoke about capitalising on the lovely aspect,” says Richard. “We had spent a lot of time on the site looking at the views and working out where the main spaces of any new house should go. We also knew we wanted an open-plan design to the main living areas. Having come from a traditional cottage with lots of small rooms and corridors, we were keen to create large airy spaces that didn’t need corridors.”

The planners were extremely receptive to the design that Hutton proposed for the site. “We’re not about one-off fancy villas; it’s not about making statements,” says Hutton, who designed Zinc House in conjunction with LJRH Chartered Architects and who is professor of architecture at the University of Dundee. “We are interested in making a grammar of houses for the Scottish landscape, the solution to which might be quite quiet and modest.”

What finally emerged may not have been about making a statement, but it was nevertheless full of ambition. When viewed from the east and the west elevations, the building appears to be two houses in one, linked by a central glazed single-story entrance. The smaller one-and-a-half-storey wing to the north has a carport leading to a store room and utilities on ground level, with office and studio space. The adjoining larger one-and-a-half-storey wing contains all the open-plan living spaces arranged along the south elevation at ground level, with the kitchen at its heart (this was at the request of the owners, who are both keen cooks). Above are three bedrooms (in addition to a ground-level guest bedroom) and a study area.

The hybrid steel-and-timber frame structure is unified by a continuous zinc roof stretching all the way over the two-storey living accommodation, down to the single-storey connecting entrance, and swooping up to the two-storey working block, then dipping down again to form the carport roof. The undulations were designed as a reflection of the surrounding hills. Protected external terraces face south and west with a further external space, the entrance courtyard, locking the building into the landscape and providing privacy for the north-facing living spaces.

The small square windows to the master bedroom and main bathroom on the south and west elevations were added during the build. “It was the clients’ choice,” says Graeme. “I thought the bigger windows would suffice, but incorporating these extra windows means they now have views out to sea when lying in bed, and out to the distant trees from the bathroom. We were keen to accommodate Richard and Jackie’s wishes and these bespoke details have really worked out both for them and for us.”

The house took the best part of two years to build. “The site is in a slight dip on a shallow south-facing slope,” as architect Mark O’Connor of LJRH, who supervised the construction of Zinc House, explains. “There is a free-draining layer of topsoil on an underlying bed of impermeable clay – a combination that often produces a site prone to waterlogging.”

The solution was to lay a network of field drains which in turn connect to the existing field drainage below the agricultural ground to the south of the house.

“Richard also wanted to take the added precaution of raising the house and courtyard by 300mm, quite an expensive exercise as the total area of ground affected is quite extensive,” says Mark. “Despite the fact that this is a thin layer, a lot of fill was required.”

The Callisons kept a close eye on developments from their cottage nearby, as their new home finally emerged. “We adopted a practical rather than a neurotic approach to the environmental performance of the house,” says Graeme. “We didn’t design it to achieve Passivhaus accreditation. I’d say it’s a ‘passive house’, with an e. It is passive in that it’s a narrow plan, naturally ventilated with the voids allowing air to move. We have compensated for the amount of glazing by having a lot of insulation elsewhere in the building. A bank of photovoltaic panels to the west of the house supplements the underfloor heating. We looked at a ground-source heat pump but I don’t think in this case it would have been terribly economic.”

And that’s not the end of the tech in place here, as Mark explains: “The house is fully networked, with all sockets, light fittings, heat sensors, automatic blinds and security systems linked back to a central programmable hub. As each fitting requires a direct cable link, the amount of wiring is quite extraordinary, somewhere between a traditional house and an aircraft!

“The decision to install a system of this nature should probably be made early in the design process, so that space for the installation can be allowed and the way in which it integrates with the build can be carefully planned in advance,” he points out.

In contrast to the complexity of the automation installation, the internal finishes are simplicity itself. “We wanted it white and minimalist,” says Richard. “Initially we were going to have oak floors throughout the whole of the ground floor, but we thought that even this would detract from the simplicity we were after, so instead we chose Italian tiles that reflect the greenish tinge of the zinc cladding.” The strategically placed aluminium Velfac windows, which are timber internally, have also been powder coated to a similar zinc-like hue that gives a seamlessness to the external design.

“It’s not carbon neutral or airtight but it works for us,” says Richard. “It can be hot in summer with the solar gain but there are plenty of windows to get a through draught.”

And those windows are one of the main reasons that he and Jackie still pinch themselves every time they come home. “The long views through the house to the landscape beyond are always changing depending on the seasons and the weather,” explains Richard. “There are great views everywhere in the house, even from the bath, and there are panoramic vistas from the south-facing living spaces. You could just spend all your time gazing out – and I often do!” says Richard.

For all its cleverness, Zinc House sits so unobtrusively in the landscape that even the president of the Royal Incorporation of Architects in Scotland, a local Angus resident, missed it – a fact that Graeme takes very much as a compliment. “It was only when he visited the house during the course of judging for the Best Building in Scotland Awards that he realised he’d probably driven past it a dozen times and hadn’t noticed it. He literally didn’t see it!”