A beautiful garden is not a rarity in Scotland; but one as magnificent as this, with its sculptures, pool and carefully planned layout – that’s unusual. What’s perhaps even more unique is that part of the design began life sketched on a paper tablecloth in Italy.

This is the garden of a Jacobean house in West Lothian, and before designer James Hutchison worked his magic on it, it was open parkland with mixed woodland and grazing. Apart from a small vegetable plot and an ornamental garden that had fallen into ruin, there was essentially no garden to speak of.

The owner was heavily involved with the planning from the outset. “After working on the first phase of the garden we became friends,” says James. “I felt it was essential that he was involved as much as possible in the design, so we (plantsman Stuart Gibson and Murray Parsons, who was project-managing the landscaping) asked him to join us on a trip to Pistoia in Tuscany where we could choose the specimen trees and topiary from the Italian nurseries that specialise in growing and exporting these mature plants.” 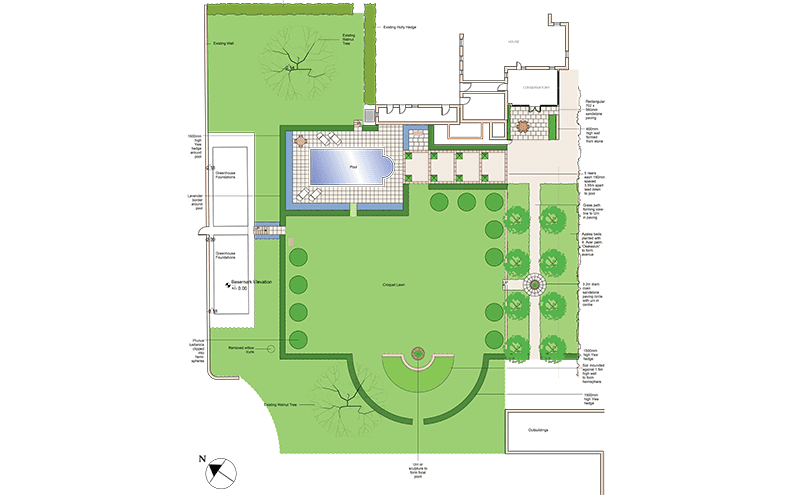 The Croquet Lawn and the avenue of Acer Osakazuki Japanese Maples

After visiting the nursery on the first day, the four of them headed out to dinner, which led to the design on the afore-mentioned tablecloth, before they returned to the nursery the following day to get the necessary plants.

Today, the garden falls into five distinct parts: the woodland gardens that surround the house, the vegetable garden and the three gardens that were created and planted by the team.

The pool was designed and built by Alba Pools (now renamed Aquality Leisure) and was dug out before the garden designers arrived on site.

There were enough level changes to make the garden interesting, but not so many that the budget had to be spent on retaining walls and steps. Good access helped too.

The first of these has a framework of yew hedges, which provide shelter for the pool and enclose the croquet lawn next to it. Its southern boundary is a path framed by Acer palmatum ‘Osakazuki’, underplanted by scented white azalea ‘Persil’.

The house is Jacobean

To the east of the house is the Silver Garden, a large oval lawn enclosed by dwarf walls that form raised beds filled with silver foliage and white-flowering herbaceous perennials such as Paeonia lactiflora ‘Jan van Leeuwen’ and Hemerocallis ‘Moonlit Masquerade’, and surrounded by eight silver-leaved pear trees.

Finally, to the north of the Silver Garden is the Italian Garden. Its focal point is an armillary sphere made by John Close Sundials, with a knot garden of box and purple berberis hedging surrounding it. This is then framed by two rows of evergreen standard ‘lollipop’ trees (clipped Elaeagnus x ebbingei) and these are in turn enclosed by two rows of pleached hornbeam.

From the initial ideas to completion, this project took two years, and, judging by the results, it was well worth the wait – and the jaunt to Tuscany.

James Hutchison on his style and ideas

The brief To create a garden out of an expanse of woodland, open grazing and parkland.
Challenges There was background noise from the road near the house. The client requested that bunds be formed from mounds of topsoil that were then seeded with grass. These formed a barrier on the west side of the croquet lawn and have helped to keep out the noise of the traffic.
Designer James Hutchison of James Hutchison Garden Design. “The layout was strongly influenced by client, who had a keen sense of design and a really positive enthusiasm that was enormously helpful in making the project a success,” he says.
Photography Angus Bremner
Words Caitlin Clements