A tower house on the Kintyre peninsula, restored and maintained by the Landmark Trust, offers both contemporary art and ancient history in a spectacular setting 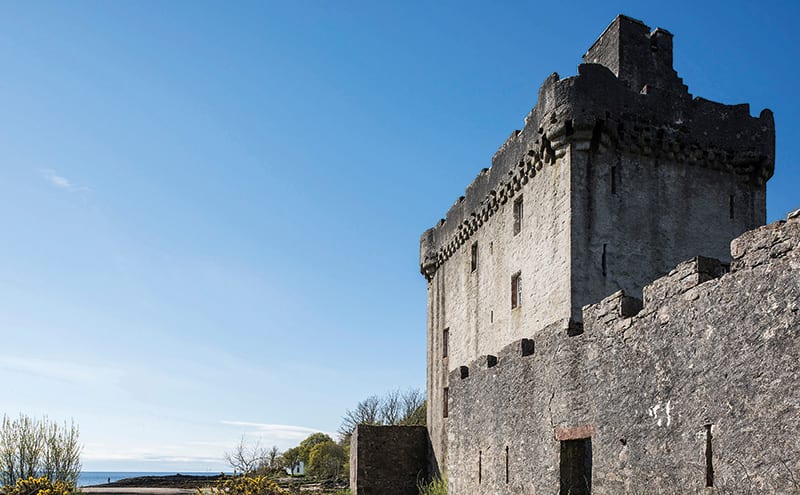 A 16th-century tower house built by the Bishop of Argyll, Saddell Castle was sensitively restored by the Landmark Trust and is now self-catering holiday accommodation for up to eight people. It sits in a stunning location with views across the Kilbrannan Sound to Arran

In 2015, to celebrate 50 years of the Landmark Trust, an addition was made to Saddell Bay on Kintyre’s east coast. Grip, a sculpture by Sir Antony Gormley, was originally intended as no more than a temporary visitor, part of the UK-wide LAND installation commis­sioned to mark the organisation’s birthday celebrations. Two years on, though, and Grip is still here. In fact, the life-size iron figure endlessly staring out to sea has recently been granted permission to stay forever.

Gormley, who is best known for his monumental Angel of the North, personally selected the site from among the 200 properties cared for by the Landmark Trust all over Britain (as well as several abroad), saying that he felt a connection with Saddell Bay’s remote, rugged, elemental position. “The Trust saves buildings that would otherwise disappear and allows us to live within their history,” he remarked in 2015. “Many of them are detached from their original context of use and many are remote. Some were built as follies or towers, made to stand apart using their isolation as a point of punctuation in the landscape, marking a point from which to look at the world at large.”

Many visitors have come to the Mull of Kintyre to see the sculpture and have found themselves just as impressed by the Saddell estate, seduced by the romantic castle and the beautiful bay in front of it. Grip thus fulfils the role Gormley intended for it, as a very effective link between past and present.

Since its purchase in 1975, Saddell Castle has become one of the Landmark Trust’s most popular venues. It made an appear­ance in the video for ‘Mull of Kintyre’, the 1977 hit for Paul McCartney and Wings. It’s a typical Scottish tower house of the type that originated in the 14th century and remained popular thanks to its effective­ness as a fortress. Today, it has been given over to exclusive-use self-catering accom­modation, but this is just the latest of many guises it has taken on over the centuries.

[sociallocker id=19687]The castle was built in 1508 by the Bishop of Argyll on land that had been gifted by James IV. It was transferred to James Macdonald in 1556 but was largely destroyed by fire in 1558 during the Earl of Sussex’s raids of Kintyre. It lay in ruin for the next century before passing to the Earl of Argyll in 1607, before he gave it to William Ralston in 1650 on condition that he renovated the castle and made it habitable within two years. Ralston did as he was asked, reinstating the roof and repairing the walls and floors. By end of the century, though, the castle had new owners, the Campbells of Glensaddell. They tried to update the interior, adding panelling and mouldings in a bid to inject an element of grandeur. Their efforts were short-lived; they soon built themselves a new home, Saddell House, in the grounds, and allowed workers from the estate to live in the castle.

Fast forward to the late 19th century, when a collector of antiques, Colonel Macleod, was the owner. By this point, following a fire at Saddell House, the castle was once again the estate’s principal residence, and the Colonel was reinvigorating his home with flamboy­ant additions, such as coats-of-arms on the dining-room ceiling, a cupola and wider window casements for the staircase. Subsequent owners followed his lead, also allowing the castle to house wartime evacuees from Glasgow. It was sold to the Landmark Trust in 1975, with the organisation securing the entire estate by 1990.

Restoration work to the castle (and its additional buildings) has been an ongoing process: the exterior walls were in surprisingly good condition but the roof had to be replaced and the interior has been remodelled. Adding bathrooms and a new kitchen are about as modern as the upgrade gets, with a clear focus on retaining the original character and style. 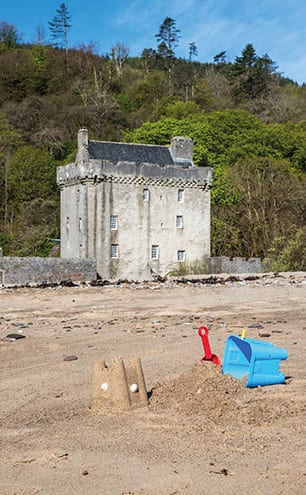 When the Landmark Trust took on Saddell, trees were growing from the parapets. Today it is well loved by holiday­makers all year round. 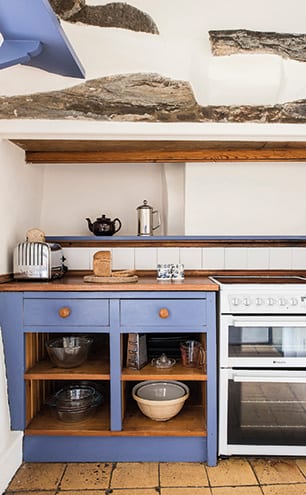 Painted units in the kitchen, produced by Landmark’s skilled in-house furnishings team. Note the old stone showing through the plaster. 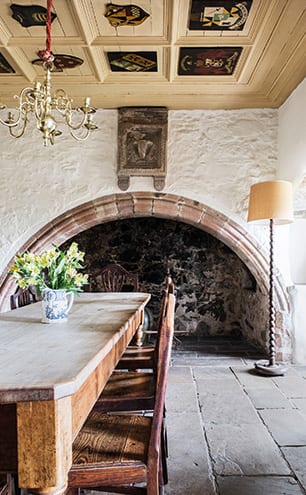 In the dining room, the shields on the ceiling – which had been given to Campbeltown Museum for safekeeping – were reinstated. The simple furnishings give a sense of timelessness. 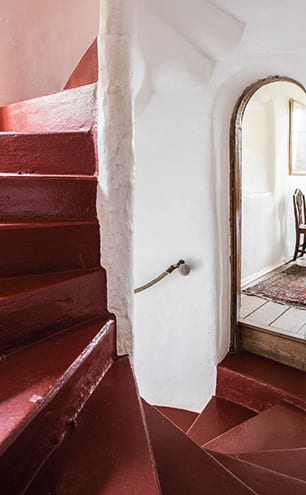 Although light and airy inside, Saddell Castle has impressively thick stone walls. 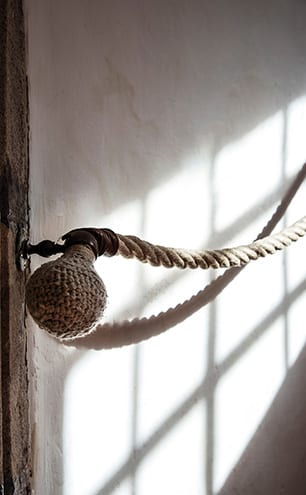 Care has gone into the details, such as this rope handrail support in the spiral staircase. 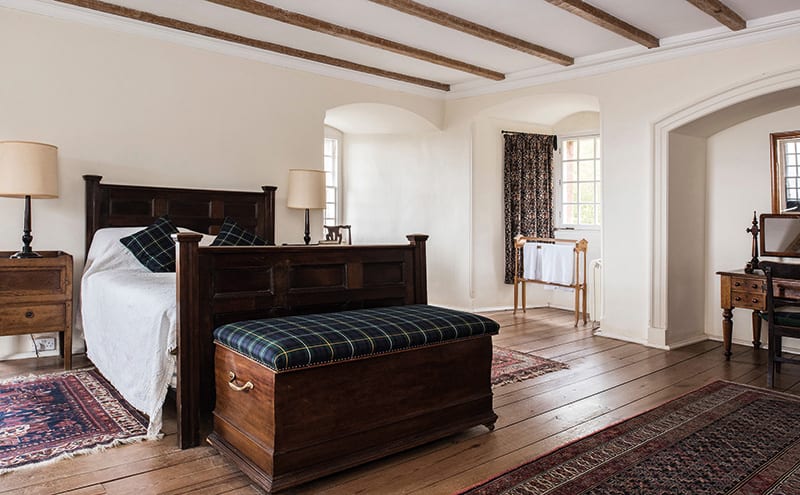 Landmark sources much of its furniture from auctions, but also commissions pieces. These lamps are crafted from old chair legs, paired with gentle hessian shades

The Landmark Trust’s aim is to protect and retain where possible, preserving the spirit of a place as it is carefully transformed into a usable building; here, for instance, the staircase has been replaced with concrete steps, the family crests on the dining-room ceiling have been reinstated after a spell at Campbeltown Museum, and decoration has been kept unfussy, with the bones of the building deliberately showing through in places. The living room has had its 18th-century moulded plaster ceiling reinstated, while flooring is recycled pine from Campbeltown’s Glen Scotia Distillery. Chairs and sofas are made to the Trust’s own bespoke design, and curtains and lamps are crafted in-house.

The Landmark Trust manages around 200 properties and has an in-house furnishings team based in the Cotswolds. John Evetts is the furnishings manager and has been with the Trust since 1976. It’s his job to source furniture and accessories to dress the interiors of the various properties: “I strive for an anonymous finish, not aiming to necessarily reflect any particular period or fashion,” he says. “Nevertheless, it should be possible to visit any of our buildings and to recognise immediately that it is one of ours. This may be because of the Shottesbrooke red paint, the buttermilk limewash, Christian Smith’s curtains, the plain linen union chair covers or even the hessian lampshades – everything is subtly but distinctly Landmark.”

Like Grip, the metal figure on the coast, the under­lying ethos at Saddell Castle and, indeed, at all of the Trust’s properties, is to move with the times while acknowledging the past. As Antony Gormley puts it: “The work is a register for our experience of our own relative positions within space and time… [These are] open spaces, void of ideological or narrative content, but waiting for your attention.”[/sociallocker]