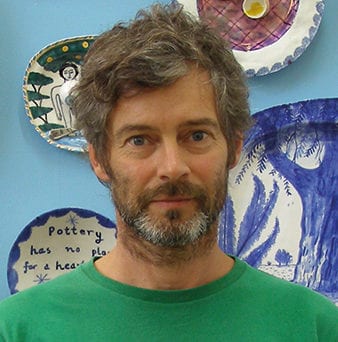 Artist Stephen Bird is originally from Scotland, but now lives and works in Australia, where he is a lecturer at the National Art School in Sydney. His work is exhibited internationally and can be seen at the Scottish Gallery, Edinburgh.

My maternal grandmother, Margaret Rose Magness, lived in a beautiful ivy-clad, red-brick cottage just off the main road that connects the market town of Stone with the pottery city of Stoke-on-Trent. She had an amazing back garden, beyond which was the slag heap for Taylor Tunnicliffe, manufacturer of the porcelain insulators that decorate the tops of telegraph poles around the world. My brother Andrew and I would collect all sorts of odd-shaped plaster blocks that had been used in the moulding process, along with plaster balls of various sizes. I would build towers out of the blocks and he would hurl the balls at them and knock them over.
My grandmother had a modest collection of Staffordshire pottery, sentimental keepsakes that marked and memorialised special moments in her life and those of her friends and family. There was the gift given to my grandfather on his retirement, a glossy figurine of a man selling balloons. We understood only too well that touching was forbidden.
Now I can break those old taboos. In my Industrial Sabotage sculptures, boxing figures dance and fight with their limbs of detritus, their legs of piled-up pottery balloons and heads of empty jugs and mugs. Pair of Pugilists (below) reunites with the pottery tradition of North Staffordshire, and reinterprets the folklore associated with the mass-produced ornamental ceramics manufactured there in the heydays of the 18th and 19th centuries. It’s like a domestic ancestral spirit rising up from the slag heap of time and proclaiming its battle cry of national eccentricities: Toby jugs, tins of baked beans, biscuits and melted ice-cream.
I hope my grandmother would have liked it. 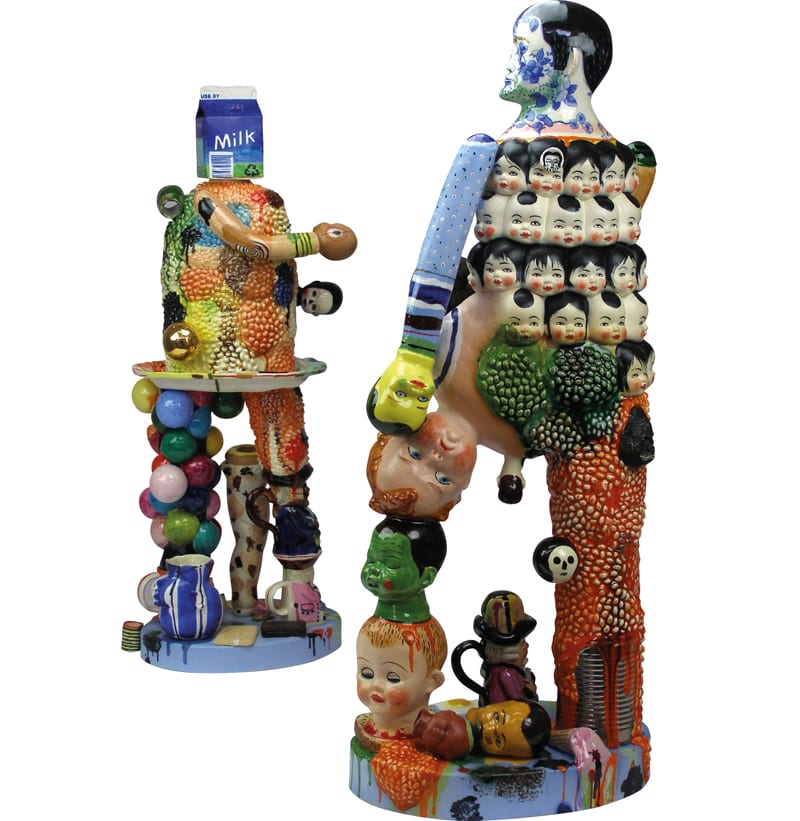