Mirrored by its new-built counterpart, a derelict farmhouse in the wilds of Lochnagar has been restored and given a second chance to be a home 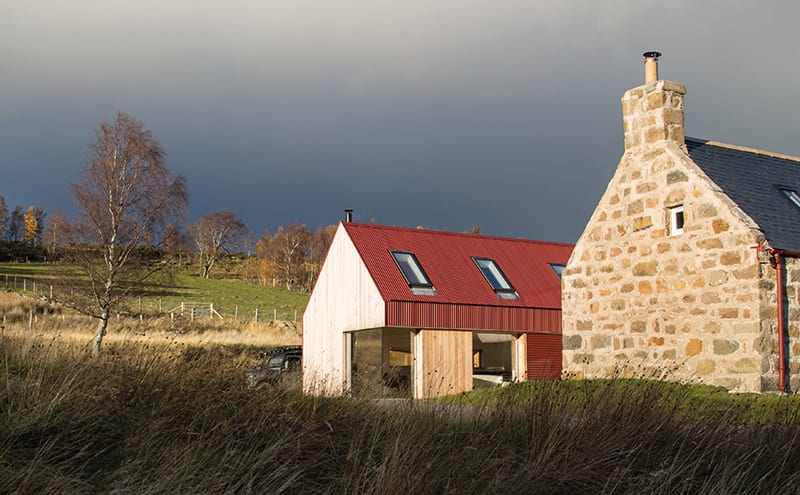 When Emma Rampton sat down with Ben Addy of Moxon Architects, she told him there were three parts to her brief. She wanted him to make her a house, to respect the landscape and to ensure the whole project was not too expensive. It’s the kind of brief that most architects love: simple, to the point and with lots of scope for imagination. The creative freedom is a gift, and when it’s coupled with a spectacular location, as it was in this case, the job becomes all the more inspiring.

The trend for converting traditional Scottish farm buildings makes a lot of sense. Their rural setting, their steadfast foundations and their usually enviable views combine to make them a dreamy proposition for architects and prospective homeowners alike. In this instance, Emma could see beyond the ruined but-and-ben farmhouse she’d found (two rooms on a single storey) and visualise a modern home that would give her the best of both worlds. 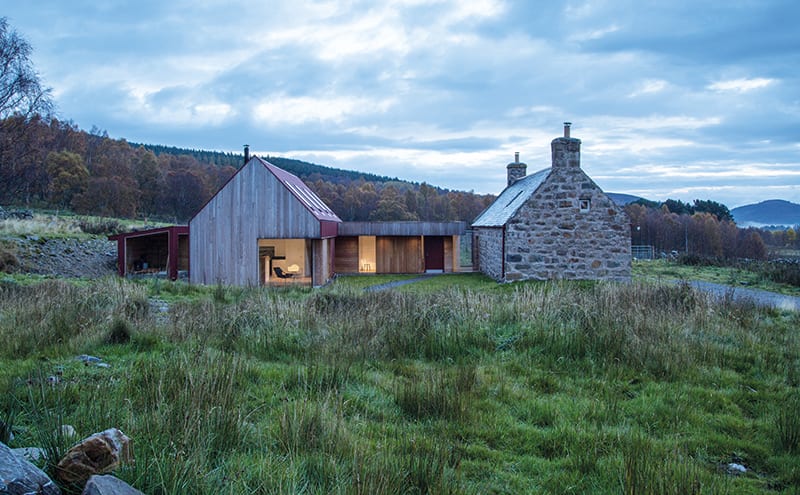 The location – near Crathie in the splendid Lochnagar National Scenic Area of Aberdeenshire – was what first attracted her to the property. In fact, it was really the only attraction: “The farmhouse was a complete ruin,” she recalls. “There was rain pouring in through the roof and the back wall. It was more or less just four solid granite walls on a hillside.” That was enough, though, and one year after she’d bought the house, the build began.
Ben Addy was just as excited as his client was about the project’s potential, despite its poor condition. “Several decades had passed since the farmhouse had last been lived in, and it had simply been abandoned to the elements in the intervening time. The surroun­ding land was sodden and, after storms, the ground floor would completely flood,” he says. “It was quite a challenge to take this derelict High­land farmhouse, restore it and extend it to provide a comfortable modern home.” 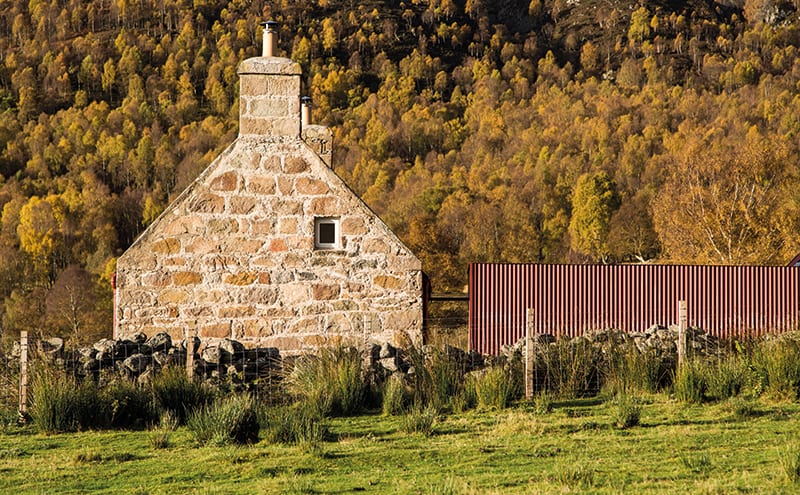 Things got off to a difficult start, he recalls: “When we carried out our initial measured survey, we were wading through a foot of ice-cold water. And we came across the partially submerged skeleton of a sheep in the living room!”
Emma’s initial idea was to give the restored house a similar layout to what it would have had originally. But she also knew that the farmhouse was small, so building an extension was always on the cards. To this end, Ben has created an addition that, when viewed from above, shows the plan to be a U-shape. The footprint of the rejuvenated farmhouse is mirrored by a new-build element, which also covers 120 square metres, with the two connected by a grass-roofed passage. The shape calls to mind many of the buildings in this area, creating as it does a courtyard of sheltered, private outside space – a necessity in this exposed hillside. 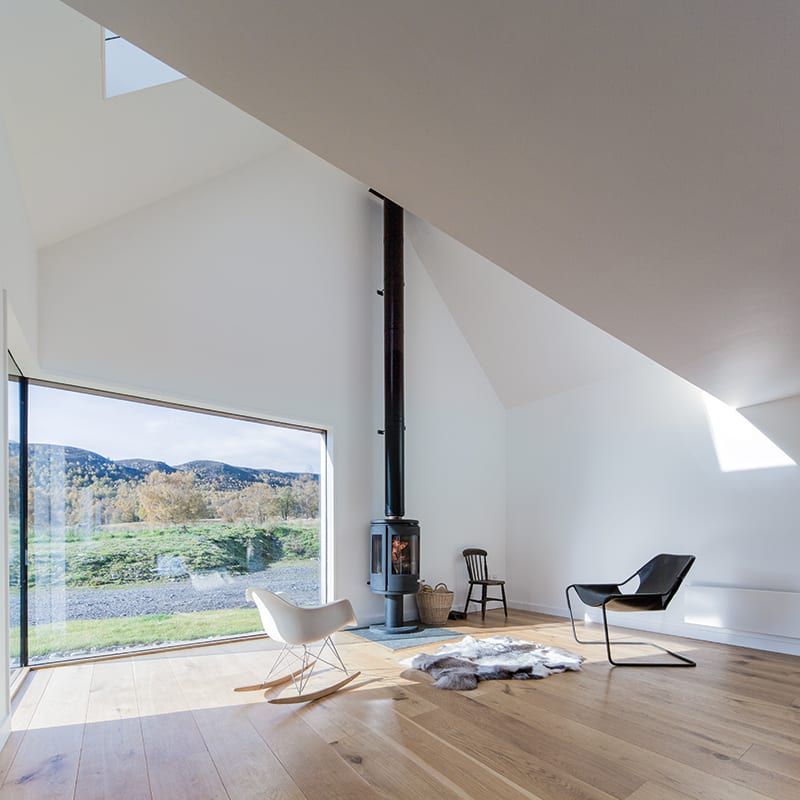 “We were able to retain the essential character of the original building, with its granite rubble construction, matchboard linings and compact form, while also providing larger spaces with a greater sense of connection to the outside world,” says Ben.

“The rooms in the restored building are introverted, with only small window openings through the massive granite walls. But the new addition combines large-format sliding walls and floor-to-ceiling windows to maximise the sense of being in the landscape. This is especially worthwhile in the summer, when the house can be completely opened up to the courtyard created between the ‘twins’.”

It was central to Emma’s vision for her home that the restoration and extension took their cue from the rough and rugged hillside on which the house sits. She wanted it to acknowledge its roots while still being a contemporary structure fit for modern living, but without detracting in any way from its dramatic setting. “It was all about the landscape for me,” she explains, “so making sure we didn’t disrupt existing landforms or the settled relationship between the croft and the topography was really important. It sits so comfortably in the landscape – and so does the extension.”

Colour was a key element in this. “The aspen and birchwood that wraps around the site to the north and west is lit by the rising sun each morning and is beautiful at all times of the year, but is incredible in autumn,” she says. “I wanted the colours of the landscape to be brought into the design of the house – hence the red-oxide cladding and the greys of the untreated timber.”

Emma was completely committed to finding the right solutions to the build. She understood the benefits to be reaped by living with a property – regardless of what state it is in – in order to unearth its idiosyncrasies in a way you simply can’t just by viewing it. Pitching a tent, she set up camp several times both before and during the construction to gain a deeper insight into the house and land that she had purchased.

“I really valued this experience,” she recalls. “It gave me a strong sense of the development of the project during the initial design and during the build. I was able to envision the design in my mind’s eye when I stayed there and I was also able to see, close at hand, the physical construction taking shape around me.”