Getting to know your home is probably the single most important thing you can do when you’re planning a reno­vation project. It might appear an obvious starting point, but really thinking about how you use your house, and how that might evolve over the years you’ll spend there, is the crux when it comes to smooth, successful alterations.
This was the approach that Craig Beveridge and Rita Seidler took when they decided to overhaul their family home in the south of Edinburgh. Having lived in the property for twenty years, the design-conscious couple were well placed to sort out which idiosyncrasies they wanted to hang on to in order to maintain the character of their blond-sandstone Victorian semi, and which ones they wanted to get rid of. “Victorian houses like this are often very dark at the back,” says Craig. “In our case there were a couple of doors that led into what would have been the maid’s area and original kitchen but they could not be opened together, so it created this kind of social airlock.”
They wanted to open the house up to the light, make better use of the space and connect the rooms, all the way out to the rear garden. They took this opportunity to look at their whole house and make changes that reflected their current lifestyle. “I have recently retired but we’re not quite at the downsizing stage yet!” remarks Craig.
His original idea was to build an ‘outlook’ room, pushing out from the attic (on a clear day, the house enjoys uninterrupted views across East Lothian and Arthur’s Seat), but this was deemed too radical since it affected the roof structure. Instead, he and Rita opted to develop the rear of the house, looking at how they could integrate rooms and utilise dead space.
Their rapport with Oliver Chapman, the award-winning Edinburgh-based architect, was immediate. For him, this project was typical of the Victorian homes in this enclave of the city; his task, he quickly realised, was to provide a series of spaces from the entrance right through to the rear that would allow fluidity, maximise natural daylight and make better use of the footprint.
This was made easier, recalls the architect, by the fact that the property is neither listed nor in a conservation area. The removal of the wall separating what would originally have been the maid’s kitchen and the formal dining room was relatively straightforward: it ran from side to side (rather than front to back) – deemed less contentious by the planning authorities.

This is just a taster, you can browse the full article with more stunning photography on pages 156-160, issue 97.

@john_wilson_design shows you can create a green a

Stay chic and cosy with the Shay patchwork quilt d

For something a little extraordinary, take a look

The Lioness & Palms tiles from Balineum are recrea

Bringing in the rays @plainenglishkitchens #homes

Your new year’s resolution is to be colour confi

A fine example of quality claret, the Henrik Peder 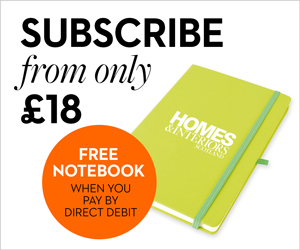